A little while ago I wrote a fanpost for the play-in round of my Greatest Moment In Cardinals History bracket. The results are in and the Round of 32 is set:

With that in mind, here is the updated bracket: 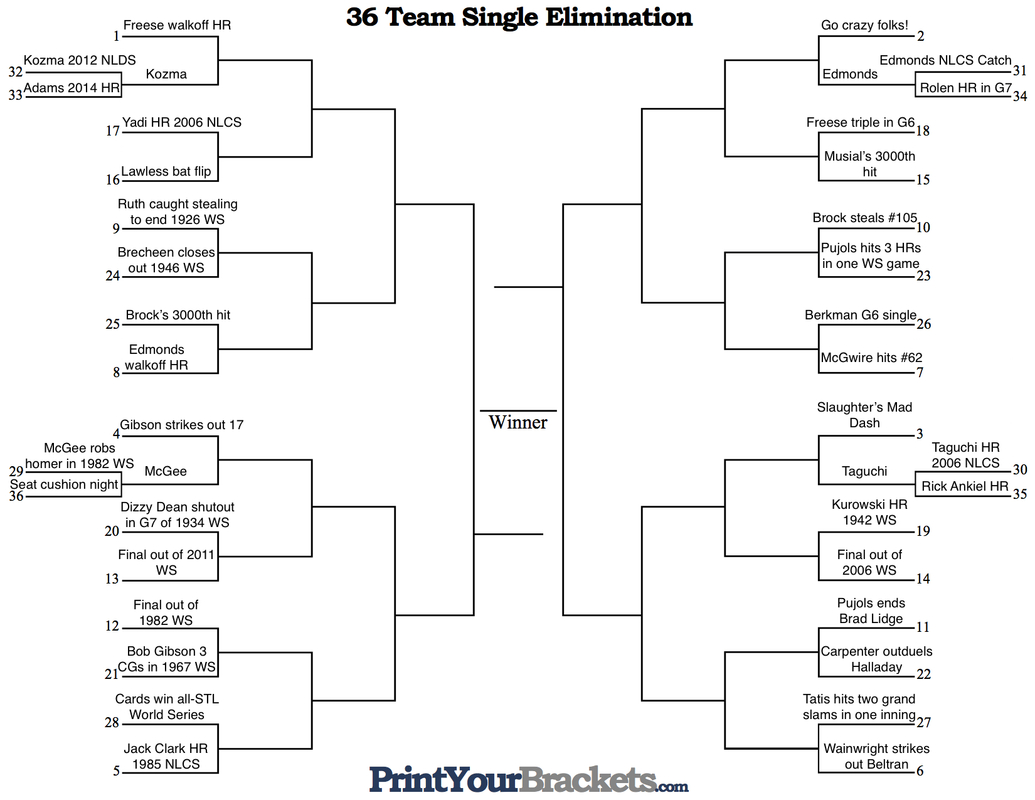 We have 16 matchups to get through so I'll try to keep this brief. Feel free to skip ahead to the link towards the bottom of this article.

The Cardinals called on Pete Alexander for the final 7 outs of Game 7 of the 1926 World Series. He retired the first six Yankees he faced before walking Babe Ruth with two gone in the bottom of the 9th. With Bob Meusel at the dish and Lou Gehrig on deck, Ruth broke for second when catcher Bob O'Farrell fired down to second where Rogers Hornsby sealed the first championship in franchise history.

A rollercoaster 7th game concluded with Harry Brecheen–who surrendered the lead in the 8th–yielding a pair of singles to open the 9th. Brecheen and the Cardinals, back up by a run, would retire the next three Red Sox batters for the club's 6th title since 1926.

I don't have much to say about this matchup, except that "Edmonds hit 42 home runs during the regular season...AND WE ARE GOING TO GAME SEVEN IN THE NATIONAL LEAGUE CHAMPIONSHIP SERIES!"

This really isn't a fair match in the year 2017, but just know that Dizzy Dean capped off the 1934 World Championship with his second complete game of the series–a Game 7 shutout to lead the Cardinals to an 11-0 victory.

And now for your viewing pleasure...

Final out of the 1982 World Series vs. Bob Gibson's three complete games in the 1967 World Series

Bruce Sutter closed out "a World Series winner for the Cardinals" with a strikeout of Gorman Thomas (the man Willie McGee robbed above) to win Game 7 by the score of 6-3.

Maybe you should have pitched to "that blank-blank Van Slyke", Tommy.

Do you go with the historical landmark or the recent memory?

Ditto everything I just said in the previous matchup but swap Harry Caray's name for Jack Buck.

What will it be: Big Mac saving baseball or Big Puma saving Game 6?

Does So Taguchi have enough Devil Magic in the tank to knock off a #1 seed?

Final out of the 2006 World Series vs. Whitey Kurowski's go-ahead homer in Game 5 of the 1942 World Series

This is another modern moment pitted against an older opposition. Wainwright broke a 24 year championship drought with a strikeout of Brandon Inge while Kurowski took Red Ruffing deep to give the Cardinals the lead for good in the top of the 9th of Game 5 en route to the first of three championships in five seasons.

It hit the train track.

Final out of the 2006 NLCS vs. Fernando Tatis' two grand slams in one inning

Inject that curveball to Beltran into my veins.

Here is where you can vote.