125 years the American Association went bankrupt, forcing the St. Louis Browns (renamed the Perfectos in 1899 and the Cardinals in 1900) into the National League for the 1892 season. 5 managers and 150 games later the team finished its inaugural season in the league at 56-94, some 46 games behind the eventual-champion Boston Beaneaters (now the Atlanta Braves). The team's most valuable player was Kid Gleason, a pitcher who was worth 6.0 bWAR with a 104 ERA+ in 400 innings of work. (Gleason walked 18 more batters than he struck out.) The leaderboard drops off to Perry Werden in second with a 2.8 bWAR despite an OPS+ of 102. This team was quintessentially deadball: the club hit 45 homers (ranking second in the entire league), collectively hit .226, and finished with an OBP of .312; 14 points higher than its slugging percentage.

Through 1920, the team held a winning record in just 4 of 28 seasons. Never did the team finish closer than 13 games back of first place. A laughingstock of the National League, the franchise's fortunes revered on September 24th, 1926–a Friday afternoon. A 6-4 Cardinals win over the New York Giants paired with a 9-2 Reds loss at the hands of the Philadelphia Phillies put the Cardinals three games ahead with two to play; the franchise had secured its first ever NL Pennant. 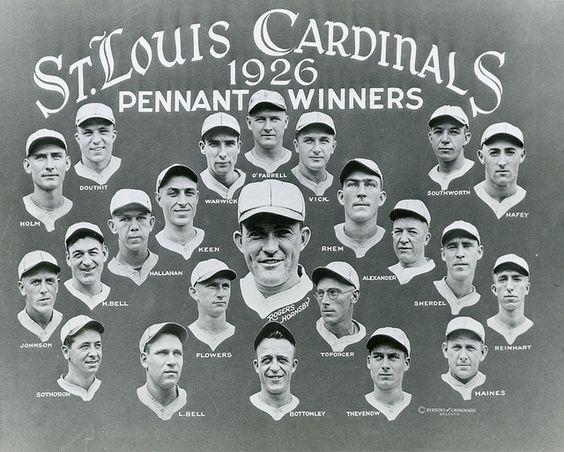 Warning: This next section contains high levels of "BFIB" content. Advance at your own risk.

A little over two weeks later the Cardinals would cap off their first ever World Series championship in a dramatic Game 7 win over the New York Yankees. That would spark a 90+ year span in which the Cardinals have become the class of the National League.

Long story short, the St. Louis Cardinals franchise is one of the most storied in all of American sports. The team's all-time attendance will hit 170 million and surpass the US population during the height of the baby boom this season. We the fans have been treated to some great baseball teams over the years, and with great teams come great moments.

I have assembled a bracket of 36 of the most iconic moments in Cardinals history to match against each other. Each round will be put on a ballot where you can vote using whatever criteria you please. 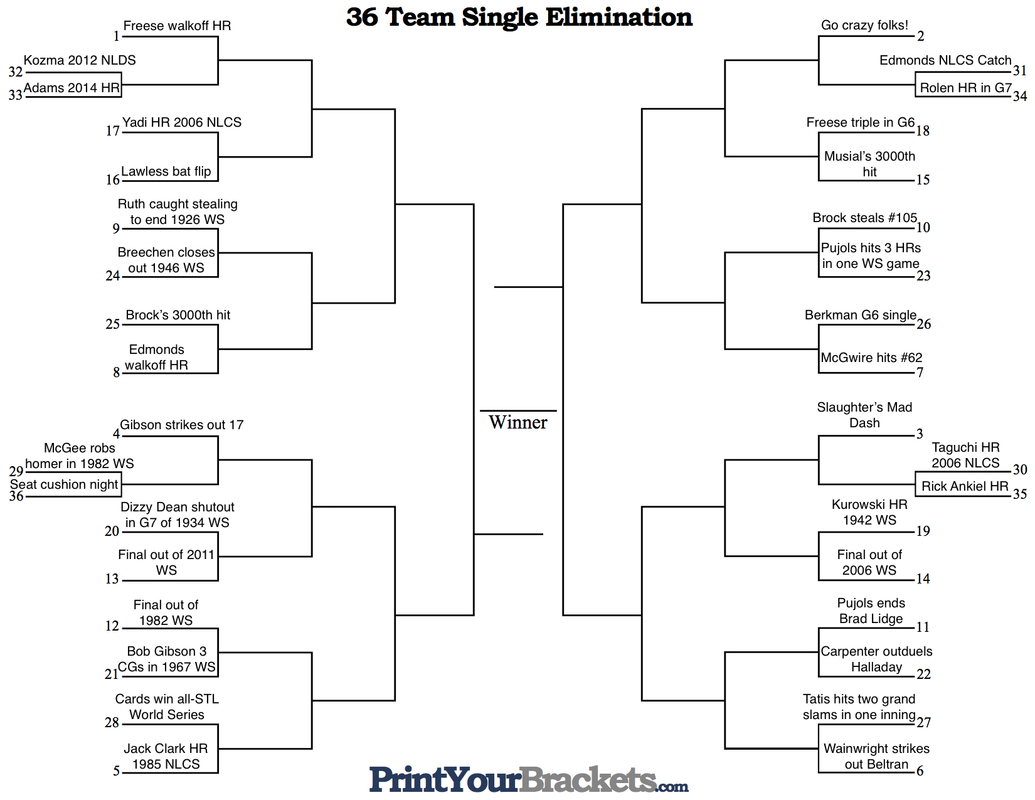 This first play-in round is mainly a bunch of modern-era wild card moments. So without further ado, here are the play-in round matchups:

These are two moments I'm sure you're all familiar with so I'll keep this brief.

After falling behind 6-0 in a decisive Game 5, the Cardinals chipped into the Nationals' lead but trailed 7-5 entering the 9th. With two outs and the bases loaded, Daniel Descalso pounded a grounder off Ian Desmond's glove as two runs scored to tie the game. Pete Kozma then lined a 2-2 fastball into right field to give St. Louis a 9-7 lead on the two-run single.

Just four days after stunning the Dodgers with a miraculous Game 1 win, the Cardinals looked to finish the 2014 NLDS at home in Game 4. Don Mattingly gave the start to that year's Cy Young and NL MVP winner: Clayton Kershaw. The Cardinals again rallied in the 7th inning with Holliday and Peralta base hits...you know the rest.

The 1982 World Series shifted to Milwaukee tied at a game apiece when Willie McGee gave Joaquin Andujar all the run support he needed and then some when he tagged Brewers starter Pete Vuckovich for a three-run homer in the 5th and a solo shot in the 7th. A two-run homer from Cecil Cooper off Bruce Sutter brought the Brewers within four entering the bottom of the 9th. A Keith Hernandez error sent Gorman Thomas to the plate with a man on and no outs. Thomas sent a flyball into deep left-center as McGee raced over and made a leaping catch above the yellow bar. The Cardinals won the game 6-2 and ultimately the championship in seven.

One of the few regular season moments in the tournament, the Mets jumped out to an early 5-0 lead before watching it evaporate at the hands of an eleven-batter, five-run bottom of the 4th. A 6th inning Tommy Herr double, which scored Ozzie Smith from first, was the difference as the Cardinals entered the 9th with a 6-5 lead. Todd Worrell walked the first two batters and New York scored a pair of two-out runs off Bill Dawley to take a 7-6 lead. In the most Whiteyball fashion possible–an Ozzie Smith leadoff walk, a Herr sac bunt, a stolen third base, and a run off a throwing error on the Smith steal–the Cardinals retied the game and to extras we went at Busch Stadium II. A wild pitch brought the go-ahead run home and again the Cardinals were down to their final three outs. Tom Pagnozzi capped a string of three one-out single with an RBI-knock to tie the game once again. Three batters later, Tommy Herr blasted a walk-off grand slam and giveaway seat cushions rained down. Just look at this win probability chart: 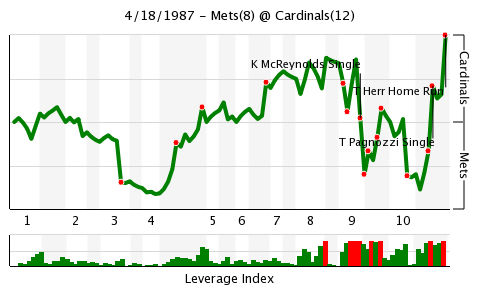 Game 7 of the 2004 NLCS is just one of three individual games (Game 6 of 2011 World Series and Game 7 of 2006 NLCS) to have multiple moments in the field of 36, and barring any miracles it will be the only vote pitting those same-game moments against each other.

Roughly 24 hours after a crushing Game 6 defeat, the Astros began the winner-take-all 7th game with a bang: leadoff homer Craig Biggio. Jeff Suppan surrendered a walk and a base hit in the second to put two on with one away. Brad Ausmus lined the fourth pitch of the AB into deep center field...Jim Edmonds things happened. The next batter was pitcher Roger Clemens, who struck out looking to end the threat. Also: this one baseball blog got its Twitter banner. 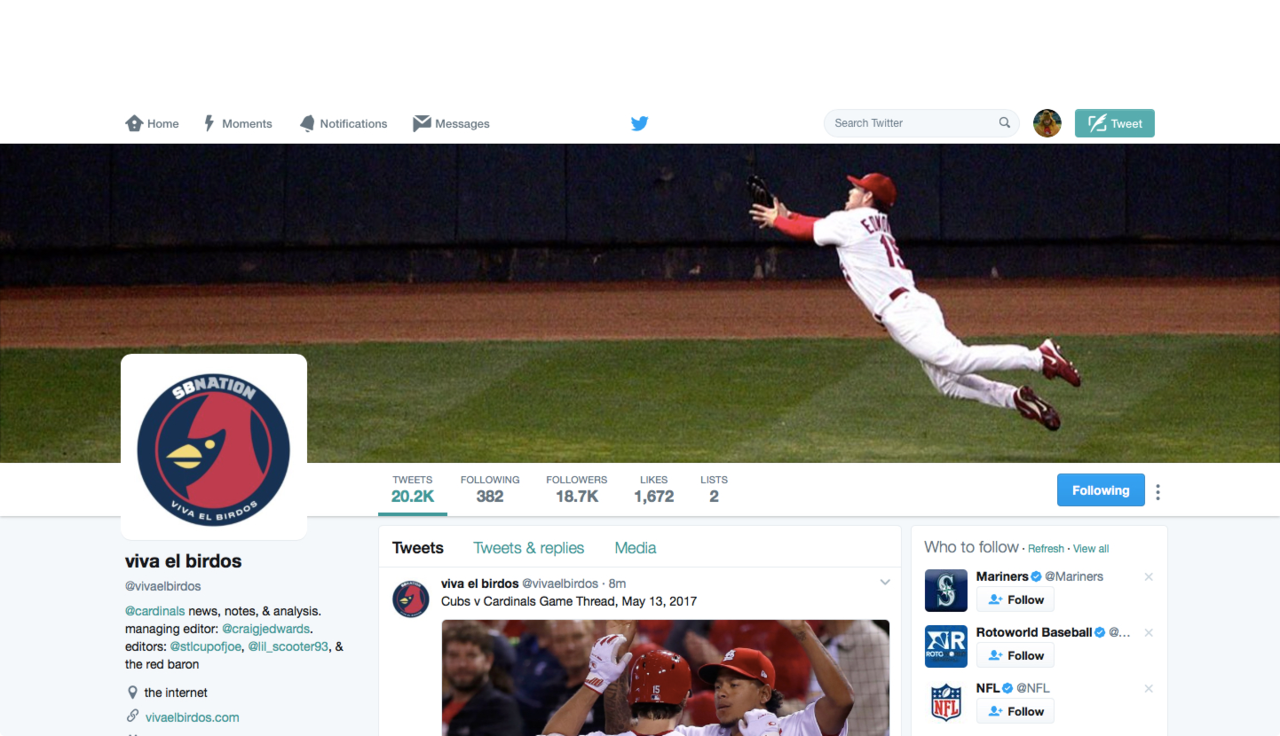 However, the Cardinals still trailed the elimination game 2-1 entering the home half of the 6th. An Albert Pujols RBI-double tied the game at two to bring Scott Rolen to the dish. Rolen wasted no time, pulling the first pitch from the seven-time Cy Young winner down the left field line and over the fence to give the Cardinals their first lead of the night. St. Louis never looked back as they won the game, and subsequently the pennant, 5-2.

So Taguchi's go-ahead homer in Game 2 of 2006 NLCS vs. Rick Ankiel's homer in first game back

After being shut down by Tom Glavine in Game 1, the Cardinals were in dire need of a win over the favored Mets to avoid heading home in a 2-0 hole. Carlos Delgado hammered a three-run homer off Chris Carpenter in the bottom of the first to pave the way for a 6-4 Mets lead entering the 7th. The Cardinals worked a two-out rally on a Pujols single, Edmonds walk, and Scott Spiezio triple to knot things up at six, which remained the score going into the 9th. Billy Wagner, the NL's second most valuable reliever in 2006 per FanGraphs, engaged in a nine-pitch battle to begin the inning. Taguchi lined a go-ahead homer into left field as the Cardinals went on to win 9-6.

Okay, maybe I was influenced by reading Rick Ankiel's new book while putting this bracket together. The saga of Ankiel the pitcher is a sad one I'm sure you're all familiar with. After converting to the outfield and working his way back up to the big leagues, the Cardinals led 1-0 following the 7th inning stretch. Al Hrabosky jokingly asked on the TV broadcast if the Padres were going to work around Ankiel and pitch to Pujols instead. San Diego should have listened. With runners on second and third, Ankiel launched a two-out, three-run homer over the right field wall to blow the game open and make it 5-0, the final score.

Here is where you can vote.