Note: All stats in this piece do not account for Wainwright's April 16th start against the Yankees.

Last season, Adam Wainwright passed both Jessie Haines and Dizzy Dean on Fangraphs' all-time Cardinals WAR list. When you account for his bat and glove, which add another 4.2 fWAR, Wainwright checks in as the 9th most valuable player in Cardinals history and the second most valuable pitcher behind Bob Gibson. If he ends his career in St. Louis, there is a chance Waino leaps over Enos Slaughter, Ted Simmons, and Ken Boyer, which would put him at 6th all-time. The names that would still be ahead of him? Ozzie Smith, Albert Pujols, Bob Gibson, Rogers Hornsby, and Stan Musial. Adam Wainwright is the best pitcher the franchise has had since the President of the United States fell down the stairs.

In many respects, 2016 Adam Wainwright resembles Gerald Ford. A variety of factors, some out of their control, brought both down to a production level that could be considered below average, but not horrible. Okay, maybe I just wanted to keep talking about presidents and their battles with stairs (seriously, click on that link), but the point is Adam Wainwright was extremely good, is now not as good, and it is time for nerdy baseball things.

It's no secret that the the 35 year old Wainwright will not be getting any younger. Take a look at some of his PitchF/X stats courtesy of brooksbaseball.net

Since returning from Tommy John surgery, Wainwright's fastballs have been slower and his curveballs have had less drop. That's concerning but also not surprising for a pitcher laboring into his mid-thirties. But turn your attention towards the far right column. His curveball has seen a gain in horizontal movement since returning from his achilles injury in 2015. This is because Wainwright's arm slot has evolved as he has aged, just look at his fastball release point.

With a 6'7" frame and long arms, Wainwright has enjoyed the luxury of being able to mix up his release points over the years. Here is a side-by-side of two fastballs, one from his first career shutout in 2010 and the other from his 2017 season debut. 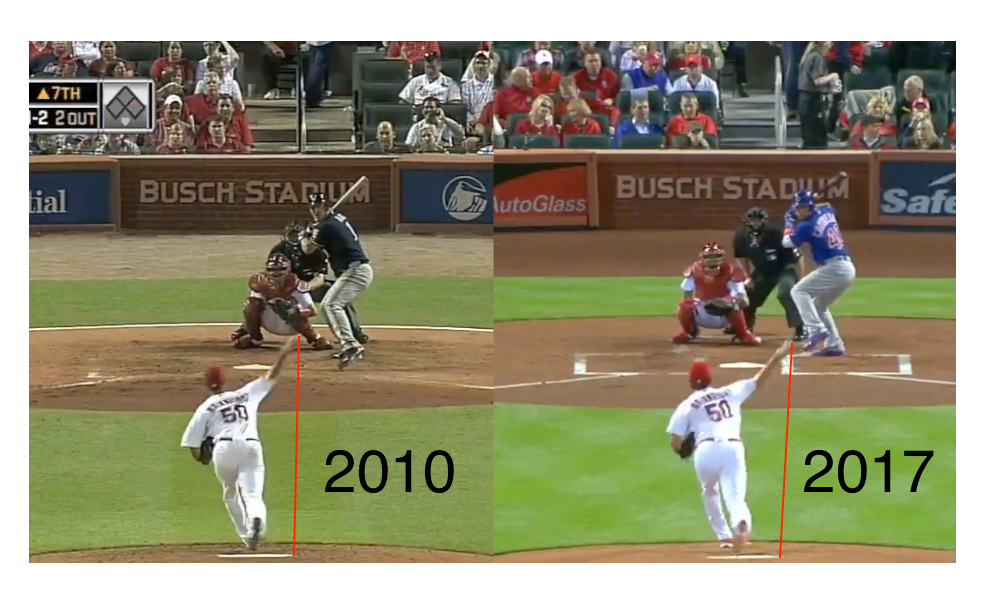 The 2010 ball is released from a higher point but also a point closer to the rubber, whereas the 2017 ball is the exact opposite. But remember, the picture above shows two fourseamers. While Wainwright's hand has moved further and further from the rubber on his harder pitches, his curveball release point hasn't. Take a look at his horizontal release points in 2017.

The curveball, still Wainwright's best pitch, lacks the deception coming out of the hand it once had. Earlier in his career, virtually every pitch Wainwright threw had a release point in the 1.2 feet range. Throw in a lowered arm slot that removes some of the downward plane his curve used to have, and Wainwright's refined mechanics have only hurt his top weapon.

Earlier this month, Joe Schwarz wrote about how horizontal movement helped Carlos Martinez tunnel pitches in his Opening Night masterpiece against the Cubs.

When you include the (relatively) newly-introduced curveball in the conversation, Martinez possesses two clusters of pitches that follow equal but opposite horizontal movement paths....the mimicking of horizontal movements across pitches can take over the lead role in pitch tunneling and sequencing.

To top it all off, Martinez's arsenal is held together by his blazing fastball which Joe referred to as "the great equalizer". But Wainwright has neither an array of pitches with filthy movement or the ability to light up a radar gun with triple digits. Wainwright never dominated through tunneling pitches or blowing away hitters. It was his ability to sequence at-bats using a straight fourseamer, a cutter with good run, a sinker with good dip, a changeup to sprinkle in against lefties, and one of the best curveballs in the game. He doesn't possess overpowering stuff, but Wainwright has a variety of pitchers that can work together for a great outing.

Note: All stats in this next section are cumulative since 2015.

Wainwright's fourseamer, introduced in 2012, has become a pitch whose primary usage is behind in the count when facing left-handed batters. Of Wainwright's four major pitches, the fourseamer results in the lowest percentage of strikes in two and three ball counts against lefties. And why is this pitch becoming more-and-more southpaw exclusive?

The cutter used to be a pitch Wainwright began at-bats with over 30% of time. That number is now closer to the teens than it is the thirties. At 46.64% (not including balls in play), the cutter has the highest first pitch strike percentage plus the highest whiff rate and groundball rate of his four predominantly thrown pitches.

The curveball to finish off helpless batters (e.g. Carlos Beltran) has been the hallmark of Wainwright's repertoire for his entire career. Yet when he works hitters into two strike counts, he's going with the curve less often.

The two strike curveball has a higher strikeout and whiff rate than any of Wainwright's other major pitches. It has the lowest flyball rate but also the highest popup rate. Both the curve and cutter have two strike batting averages below the Mendoza Line, making them an interesting combo with two strikes.

Maybe Wainwright doesn't raise his arm slot back to what it was at the start of the decade. Even if he reverts back to his 2012-13 form, when he came back from Tommy John surgery, that might be enough to compensate for his declining velocity by making the most of his pitches' movement. Mix in some 90 mph sinkers and Wainwright still has three pitches at differing velocities with decent movement to keep hitters off balance when they're in the hole.

We have seen peak Adam Wainwright. It is virtually impossible that we will ever see him again. Watching pitchers age can be a painful experience, but there are numerous case studies of pitchers who have remodeled themselves to stay effective in the waning years of their careers. Adam Wainwright has made changes, some with noticeable levels of success. (Example: using his sinker more when he is ahead in the count.)

So long as Adam Wainwright is making adjustments to better his craft, faith cannot be fully lost in him; and faith I shall have. After all, we are talking about Adam Wainwright.