At 24 years-old, Adam Wainwright burst onto the scene, closing out the 2006 World Series and bringing the Cardinals their first championship in almost 25 years. Over the next 10 years, he was the opening day starter 5 times and racked up the 7th most wins of any pitcher despite missing the entire 2011 season and most of the 2015 campaign. If you prefer to measure a pitcher's performance in Wins Above Replacement as opposed to wins, Wainwright was still a top 10 pitcherfrom 2007-2016. 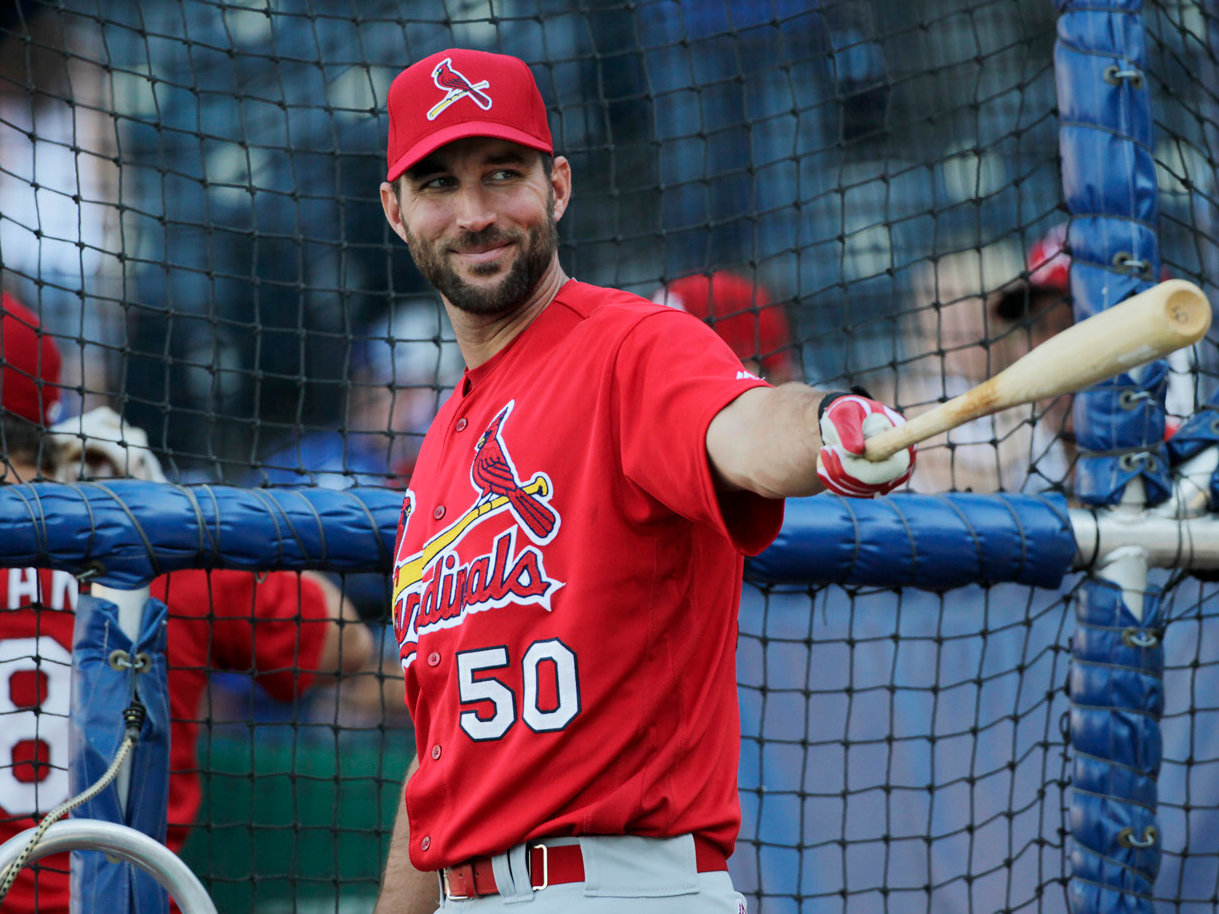 If you're still not convinced, he finished in the top 3 of Cy Young voting 4 times and received MPV votes in 2009, '10, '13, and '14. By all accounts, Adam Wainwright was an elite player for the better part of a decade, even after recovering from Tommy John surgery in 2011. Still, by all accounts, he has been anything but elite since.

In 2014, Wainwright's last dominant year (6.1 WAR), he threw almost 230 innings on his way to a 20-9 record with a 2.38 ERA. Since then, he has posted a 4.35 ERA--almost a full 2 runs worse than 2014. Is this just the decline that comes with age, especially as he pitches in his age-35 season? Is it lingering effects from his devastating achilles injury in early 2015? Admittedly, it's probably a combination of both. They key, however, is the pitch he used to break onto the scene way back in 2006.

The curveball, which was his go to pitch for years, is no longer devastating hitters with the consistency that it once did. 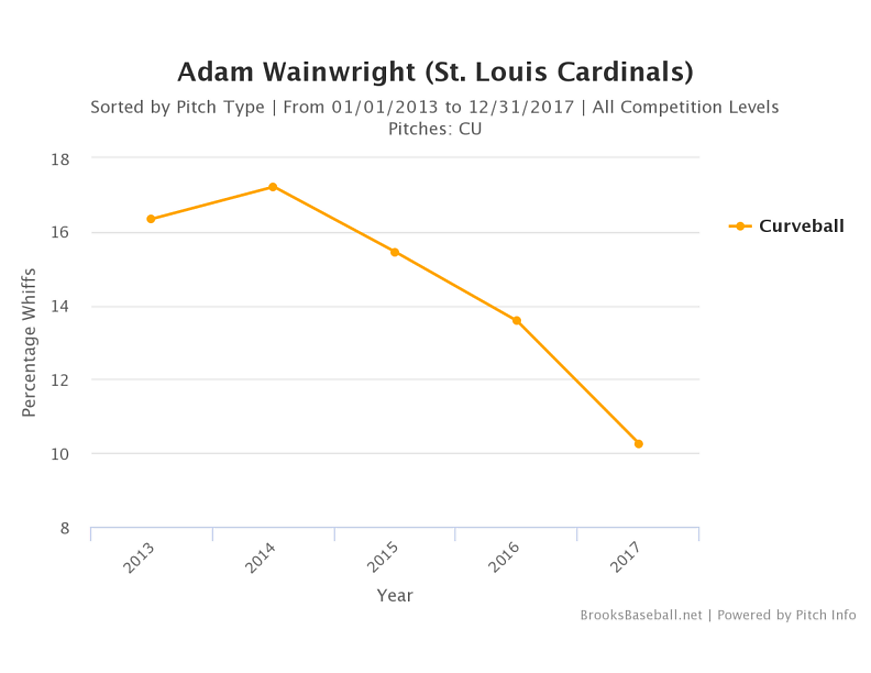 But a decreasing whiff rate doesn't necessarily mean the pitch is failing him, maybe the batters are just making more contact?

When looking at how the vertical movement of his curveball has changed over the last few years, it is evident that the pitch has regressed. 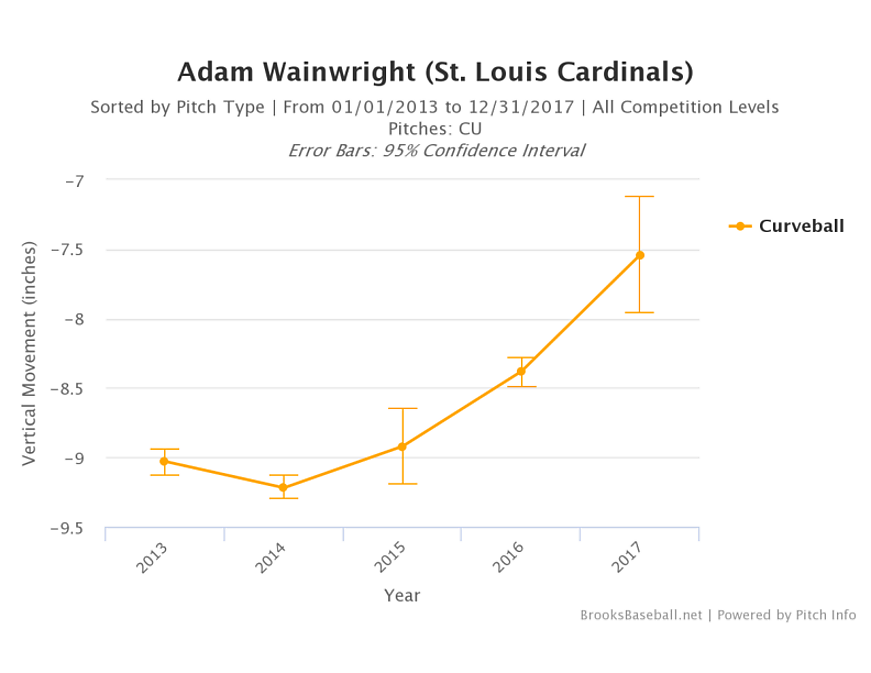 This is probably a result of age. How many pitchers maintain the efficacy of their best pitch for their entire careers? None. But the most important thing to do, especially with a curveball, after realizing you can't get the ball to move like you once could is to selectively pick when to use it. If Wainwright used his regressing curveball more sparingly, it might be more successful. Instead, he has taken an obviously less effective pitch and increased how often he uses it. 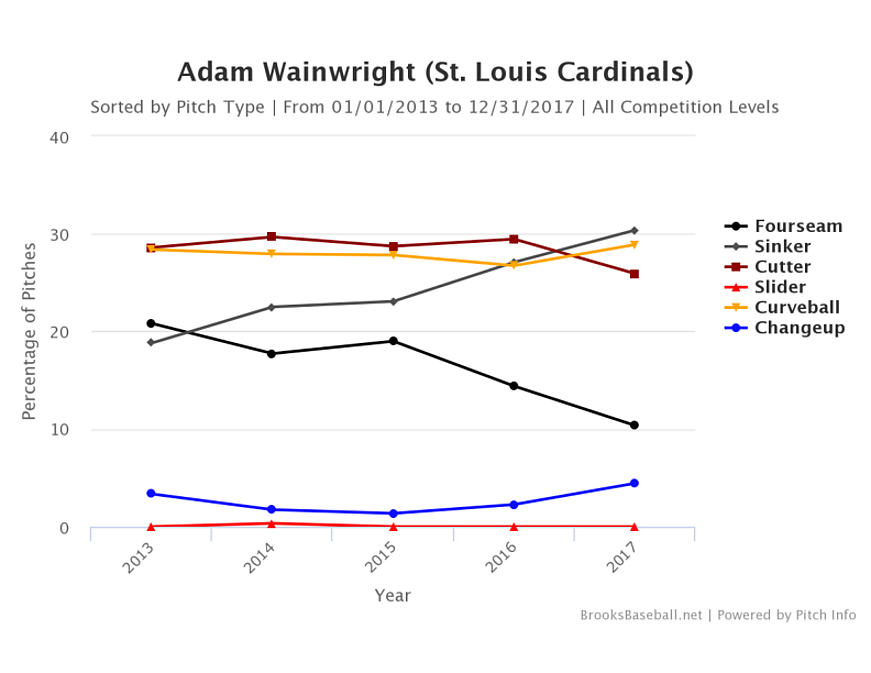 Wouldn't it make sense to use a decreasingly effective pitch less often? As you can see, instead of markedly decreasing how often he uses his curveball, the long-time Cardinal's ace actually increased its usage rate. Now, the graph shows a variance of only a few percentage points--relatively insignificant. Notably, the 28.89% usage rate is the most Wainwright has ever used his curveball.

Let's do a quick recap. Adam Wainwright is not getting whiffs from hitters because his curveball doesn't have the movement it once did. And instead of lowering its usage rate, he increased it to an all-time high.

What should we expect to happen when a less effective pitch is used more and more? 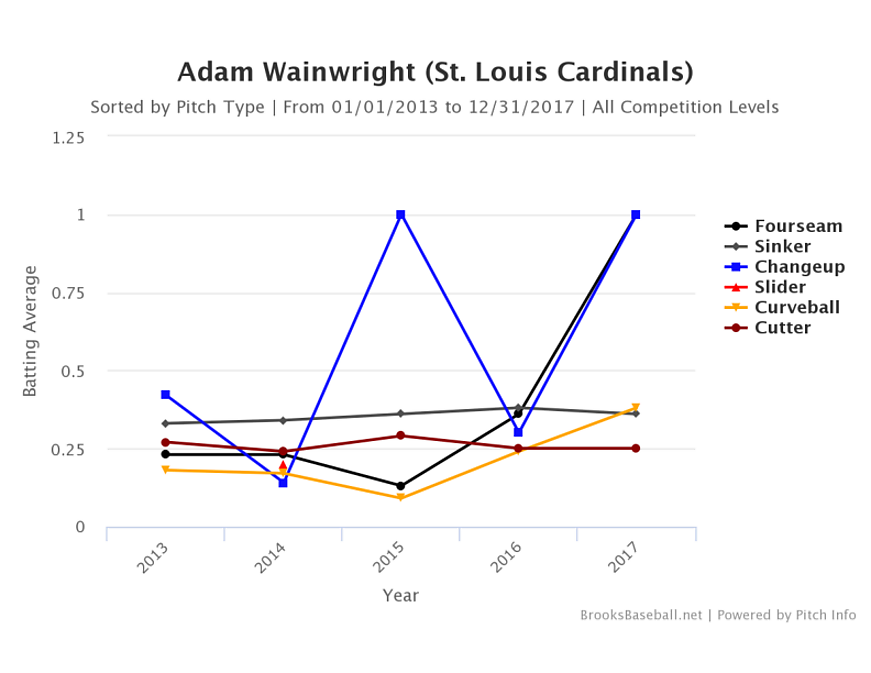 The batting average against his curveball has risen to .380 in 2017--more than doubling since 2014. This is alarming. It leaves hitters hoping Wainwright throws them a curve--a stark contrast from a pitch that used to buckle knees.

Recently, we've seen less of Wainwright's dominant curveball, and more of his less effective curveball, leading to more hits, runs, and losses. Wainwright's success is directly linked to the effectiveness of this pitch. While it may no longer be elite, it can be effective if he saves it for the right moments.

Will we ever see the elite Wainwright again?