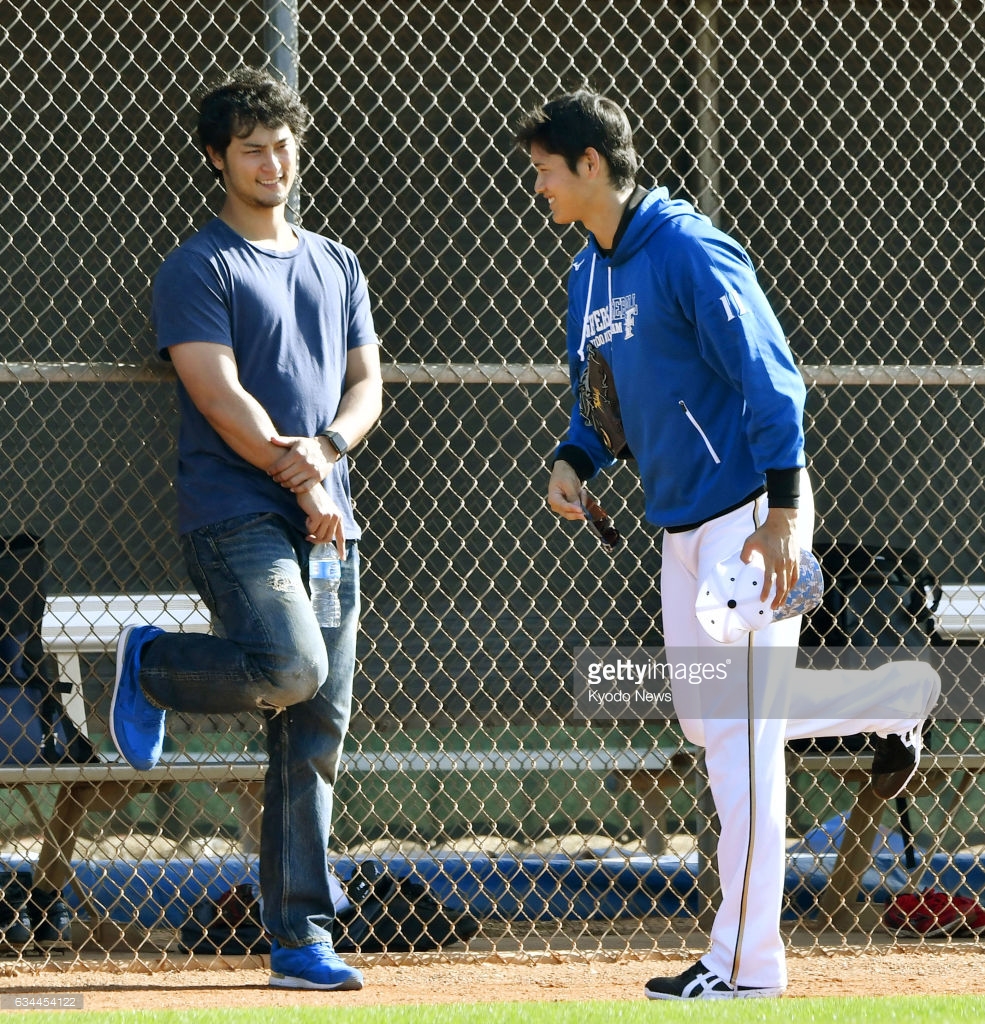 Mo: "Watashi no namae wa JMo. Unfortunately, that's all I have in my Japanese toolbox, but I hope you've been enjoying your whirlwind winter. (takes 2.5 second, three-quarter bow)"

Mo: "Shohei and Yu, Mike and I have been solidifying what we see as a revolutionary new approach to our pitching staff and we think the two of you will be the final pieces to cap our offseason. We revamped our offense, rearranged our outfield, brought in multiple elite hitters and with your additions, we believe we have a super team that can rival the Dodgers performance from last year. "

Yu: "That sounds amazing. Mike, what's different about this new philosophy of pitching?"

Maddux: "Instead of typical starting and bullpen staffs, our idea is to exclusively acquire high quality arms that provide hard counters to our evaluations of opponent offenses. We will still have a "starting 5", of which you both could be apart, but we want to aggressively manage each game, allowing each pitcher to go for as few or as many innings as they can for each outing. The Cardinal pitching system is deep enough, that we think we can fill out an entire staff of long-reliever/starter quality arms."

Yu: "That sounds... different. That seems like it would limit my innings and throw off my preparation rhythm."

Mo: "We're willing to work with yu to accommodate, but we envision a staff of elite ERA and FIP's totaling around ~150 innings each for our aces. Our organization has been on the forefront of injury management for over a decade now and we think this system will not only improve individual performance, but extend your career. We've worked with old workhorses like Chris Carpenter and Adam Wainwright as well as young guys like Michael Wacha and they will all attest that our efforts lengthened their career and always respected their career goals."

Chris: "These guys are fucking brilliant. I can tell you that thoracic outlet syndrome is no joke. The fact that Jaime Garcia is still pitching is all on these guys. I was shooting the shit with McCarthy the other day and he was kind of pissed he didn't get a shot with the Cardinals at some point. Money isn't everything. Uh, this place is like a family.. uh, fucking blah to the blah blah blah. Sorry, mo." (awkward bow)

Ohtani: (through a translator) "Why should we choose a team, who hasn't made the playoffs in 2 years, is experimenting with their pitching staff and already has a full outfield?"

Mo: (beaming grin) "That's exactly it. We aren't just a team trying to convince you to sign because you're such an extraordinary... AND CHEAP... talent. We have actively been on the forefront of revolutionary changes for decades. Cardinal history is something to behold, but YOU are an experiment and with our very successful track record..."

Ohtani: "I know you've won some of your league tournaments, but why are you more successful than Boston or San Francisco? The Dodgers or Houston? The Yankees?"

Mo: "Our current dynasty spans from the late 90s. Our organization is healthy enough to compete year in year out and create sustained pushes of elite play. We were able to do that with the MV3 and we were able to do that later opportunistically by attracting the league's veteran star players for one last chance at a World Series title."

"We have an elite pipeline with proven MLB production, not waves but a constant flow of MLB ready players being promoted and dealt. After a decade of stability and growth, our internal organizational confidence is established. The past two years have been building to this very offseason. We almost made the postseason with mostly homegrown players around our famously "aging core". We had such a glut that we capitalized by trading for Yelich, Donaldson and Stroman."

Ohtani: "Yelich, he's the outfielder you traded for? If you talk about him with as the same fear as Donaldson, he must be pretty good. How am I going to get at bats? You don't have DH. You don't have an OF position for me. How can I possibly prove myself as a hitter through only batting practice?"

Mo: "We have a very talented outfield, this is true. We'd like to take a slightly different approach to our roster with you on it. I mentioned we were experimenting with our pitching staff, but that extends beyond pitching. We have a deep lineup of elite hitters and fielders, enough to give all of them plenty of rest days to stay sharp."

"We want to showcase your abilities in every way. You can start in place of one of our starters, you can come in as a pinch hitter and take the ball for 4 or 5 innings. You can come in as a reliever to silence a rally and then move to the outfield once the threat is gone."

"We envision you as a swiss army knife... uh jack of all trades... uh. You can do everything and we can balance your workloads as you acclimate to the league, deploying you in the ways our analytics department find will accelerate your growth as a player best."

"As DH during inter-league play, starting pitcher, starting OF and..."

Mo: "Fewer games than the AL, but yes. We can give you an opportunity as a hitter as well as an OF. And we can give you 3-400 at bats and 100-150 innings pitched, while you settle into the league. If you excel at both, we will have the experience to balance your workload to keep you fresh, while maximizing your performance."

"We also have a well documented history of extending our organizational players early in arbitration and rewarding those players at the end of their careers with legacy contracts."

/Ohtani and Yu raise eyebrows and look at each other

/Ohtani looks at Yu and nods

Yu: "This has been a very interesting meeting. We still have a few other teams to meet with, but we’d like to talk again soon."

Mo: "We also understand the cultural differences faced when moving between countries such as Japan and the US. We are open to acquiring any two players you might be interested in playing with, within reason of course."

"Also, Yu, what kind of contract is your agent looking for?"

"Yu is being pursued by the Yankees, Dodgers, Red Sox and of course your Chicago Cubs"

Mo: "That quite a list. Maybe there’ll be less competition from the Luxury Boxes than we thought in the Machado/Harper sweepstakes"

Yu’s agent: "These two are quite the hot commodity."

Mo: "That’s a *very* aggressive evaluation. Ohtani, I’m sorry the posting rules keep you from signing a massive contract! We should meet to discuss contracts soon. Your demands aren’t so far off to stall negotiations."

Maddux: "Ohtani, you should have been there when Yu and I were tearing up the AL, we had a great group. We all went out on the town together. Ron was doing blow in the bathroom, Hamilton too to be honest. We stayed in the nicest hotels. It was just great. I think we’re set up in an even better situation here."

Maddux: "Uh, sorry. Um, we had a great time. Blow is just a word Americans use when things are going so well, they think its never gonna end."

Manager Mike: "Oh me? I just knew we were going to be best friends. The whole team is really excited to have you on the team. They all wanted to show you a good time. Here’s our enigmatic Carlos. He’s just the best. I’ve always had faith in him and I’m just so excited to have YU guys pitching complete games behind this crazy offense. See what I did there!?"