The Cardinals will enter camp with seven position players fixed into the starting lineup: Molina, Carpenter, Wong, Diaz, Grichuk, Fowler, and Piscotty. What the Cards do with the eighth position, presumably third base, remains to be seen. Jedd Gyorko and Jhonny Peralta both project to share time at the hot corner right now but the Cardinals' infield flexibility will give them options going into 2017.

Peralta, in the final year of his four-year contract, is the favorite to play third on Opening Day. After missing the first 57 games of 2016 with a thumb injury he suffered during Spring Training, Peralta was activated from the DL on June 7th and posted a measly wRC+ of 76 in his first 30 games back. Peralta then strained a ligament in his left thumb after undergoing surgery to repair the ligament back in March, costing him another 14 games. He returned August 2nd, putting up a wRC+ of 87 for the month before breaking out with a September wRC+ of 121, good for second on the team.

None of Peralta's batted ball stats significantly declined in 2016, but his OBP dropped 27 points from the previous year. He wasn't any less disciplined at the plate, however his BABIP of .294 this past season was 18 points below his career average. That isn't a drop in production unheard of, and the 34 year old won't get any younger, but Steamer Projections expects Peralta to slightly improve upon his 2016 performance.

Peralta is projected to be Gyorko's superior at third base defensively in 2017 and there is value in keeping the latter as a utility man. Gyorko played all four infield positions last year and putting Peralta at third could possibly set up a platoon at second base (more on that later).

Gyorko responded to skeptics of the Jon Jay trade (i.e. Mike Matheny) with the best year of his career, highlighted by that one week in July where Babe Ruth resurrected in Jedd's body. Gyorko's homer run per flyball rate nearly doubled from 2015, but his BABIP fell from .290 to .244 in 2016. The real question with Gyorko lies in how much his offensive production will regress this season.

Cardinals fans saw the best and worst of Gyorko in 2016, with his rock bottom being a wRC+ of 18 in June and his peak of 151 the very next month. Gyorko wasn't hitting the ball any harder or softer than normal, so his drastically lowered BABIP should in theory improve in 2017–a cause for optimism.

The Cardinals aren't going to replicate their historic pinch-hitting performance from 2016, and leaving Peralta on the bench in favor of Gyorko would leave Matt Adams, Greg Garcia, and Peralta as the Cardinals' backup infield options.

Here's a comparison between Gyorko and Peralta's Steamer Projections:

Plus, leaving Jedd Gyorko on the bench can lead to things like this: 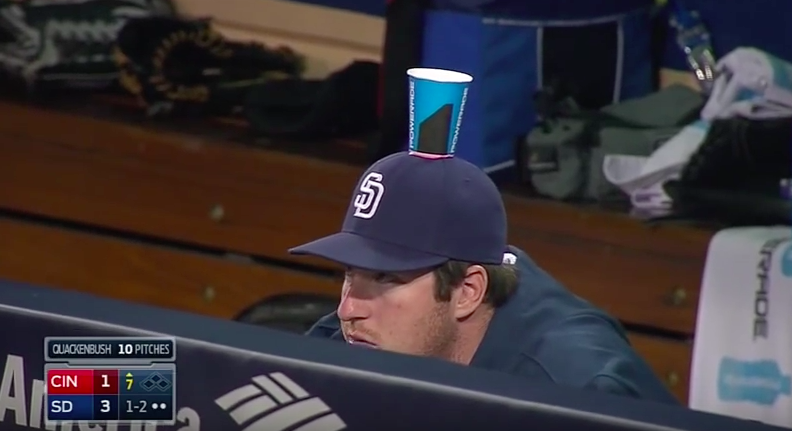 Just look at the poor guy trying to protect himself: 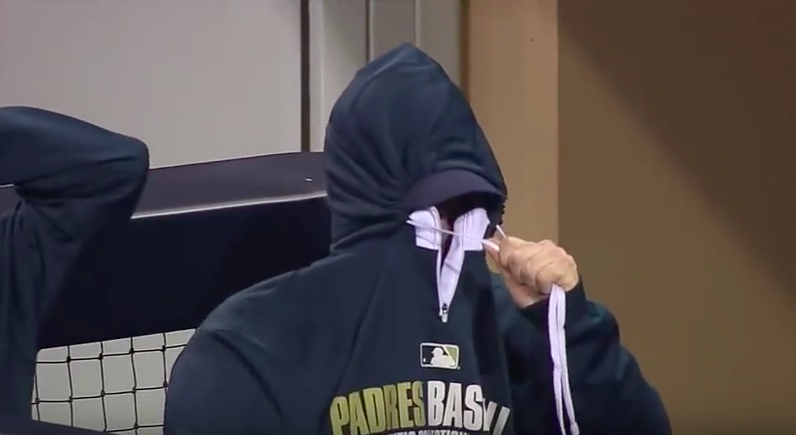 John Mozeliak has verbally committed to Wong as a piece in the Cardinals' long-term picture and batting him against righties would still put him in line for at least 110-120 starts a year (71% of all current major league pitchers are right-handed). Gyorko would serve as the top pinch-hitter off the bench when he's not starting while serving as the primary backup to Diaz and Peralta.

Wong is clearly the better of the two defensively, but Gyorko's has a higher career UZR at second base than any other position. Unfortunately for this article, there are no Steamer Projections for splits.

There is a faction of Cardinal Nation that has been pushing for this route all along. From worshipping Justin Turner to begging for Edwin Encarnacion, some fans aren't satisfied with the signings of Brett Cecil and Dexter Fowler. I tend to disagree, but that's a discussion for another day.

Brandon Moss, Mark Trumbo, and Jose Bautista all remain free agents who, to some degree, the Cardinals have been linked to. Bringing Moss back to St. Louis has been thrown around on VEB by Ben Markham, the red baron, John Fleming, and probably others whose articles I couldn't find. (Leave a comment if there was a Moss article I left off and I'll add it to the list.) The Cardinals have the payroll ability to "overpay" for any of the three by increasing the annual salary in exchange for a shorter contract.

Steamer projects all three free agents to produce a higher wRC+ in 2017 than Gyorko and Peralta, but they would require the Cardinals to realign defensively. Moss plays a below average first base, Trumbo has a career UZR/150 of 6.3 at first, but he hasn't regularly played the position since 2013. Bautista used to play third base many years ago, but at age 36 he would likely be forced to learn first base. (Tell 'em Wash.)

All three would provide the additional outfield depth the Cardinals need, but force Matt Carpenter back to third base. Carpenter is a below average third baseman and the team has already informed him that he would be the team's first baseman this year. Defensive flexibility is a luxury the Cardinals possess, but a fragile luxury easy to misuse. Adding Moss, Bautista, or Trumbo when Carpenter has been training to play first all winter would inevitably lead to the same turmoil around the infield that the Cardinals' infield defense suffered from in 2016.

For those concerned about losing a draft pick by signing Bautista or Trumbo (both very unlikely), there is any easy plan to combat this. Since the Cardinals already forfeited their first round selection by signing Dexter Fowler, it would be their second round pick they would lose. Mozeliak could sign either on a short term deal, offer them a qualifying offer when the contract expires, and recoup that second round pick under the new CBA should the free agent leave St. Louis.

Bottom line: adding any one of the three would add a power bat to beef up the Cardinals lineup overnight, but none are a good fit for the Cardinals defensively. Is the tradeoff worth it in your opinion?

Which option is most appealing for the Cardinals?