This was an idea I got a while back but only now did I get around to writing about it. I began with the PC game OOTP Baseball 17, an interactive baseball simulator where you can call the shots—or in this case subject yourself to the computer's mercy. I told the game to simulate everything until the year 2116 and after nearly 48 hours of waiting, the results were in. There was no zombie apocalypse and the 2016 election cycle didn't burn America to the ground. But baseball changed so much, yet so little from the game we know and love today. Into the time machine we go... 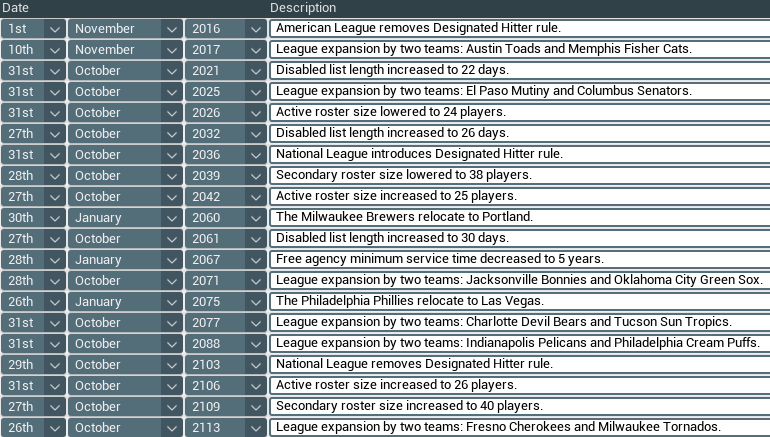 Records are meant to broken, or are they? Joe DiMaggio's record 56 game hit streak remains unbeatable while nobody has even sniffed the records of Barry Bonds and Cy Young. That being said, the record books have welcomed many new faces in 100 years.

Notable World Series History and Droughts:
Contracts:
While the average contract grew in value, I was suprised to see the richest contracts in 2116 weren't much different compared to 2016. According to Cot's Baseball Contracts, Clayton Kershaw salary this year is larger than any player in the 2116 simulation. In 2016, 34 players have a salary of $20 million or greater. The 2116 MLB had 53 such players. When looking at salaries of $10 million or more, real life 2016 had 119 players compared to 172 in 2116 in OOTP 17. The highest paid pitcher in the simulation was Austin Toads starter David Stacy who, despite only supplying 17.9 WAR over his first five seasons, had a salary $33 million in 2116. The highest paid player overall was Rockies catcher Lyle Hawn, a three time MVP, who at age 37 made $34.5 million. Salaries in general were on the rise, however. Case in point: the Rays payroll surpassed $185 million in 2116.
Hall of Fame:
For the Cardinals, not much happened in terms of inductees. Ten players were enshrined in Cooperstown over the 100 year simulation, although no 2016 Cardinals were inducted. Even in the simulation, no player ever received a unanimous vote. Astros second basemen Karl McDonald, a 4 time MVP, tied Ken Griffey Jr. for the highest induction percentage ever when he was voted in with 99.3% support in 2068.