Back by popular demand I have returned to spew even more statistical controversy. The story of Brandon Moss is seemingly the work of a playwright. Floundering from team to team, he contemplated retiring to become a fireman. That all changed when he signed a contract with the A's. In the year and a half following his 2012 promotion to the majors, Moss belted 51 homers and made the AL All-Star team in 2014. The rollercoaster ride continued in the second half of 2014 when Moss' average plunged to .173 and his slugging percentage dropped to .275. After an offseason hip surgery and a slow start to 2015, Moss was dealt to St. Louis for Rob Kaminsky that fans initially loathed. But backed by the powers of his BFF Jedd Gyorko, Moss rebounded in 2016 before falling into his most recent slump.

That takes us to the present, where Moss is months away from cashing in this winter. Moss was a guy who some considered non-tendering last offseason but now it appears Mozeliak could slap a qualifying offer (estimated at $16.7 million) on him. I asked my followers on Twitter what they would give Moss in free agency the results were rather varied. Offers ranged from 4 years deals at $18 million a year to a lowball offer of 2 years at $34 million. The topic of Moss' aforementioned streaky performances were brought up as one person said the stretch run could be a determining factor in his contract. It's inevitable that teams will line up to pay Moss 4-5 year deals worth upwards of $70 million. The Cardinals should not be one of those teams. Going on 33, Moss will only continue to regress and become a bigger injury liability. John Mozeliak has flexibility going into 2017 to accommodate for a potential departure of Moss. The gap in production between a Matt Adams, Tommy Pham, Jedd Gyorko, etc. and Brandon Moss can be easily compensated by using Moss' potential salary to make various roster upgrades.

Any discussion with Moss has to begin with his past and current production. While his peak performance, his breakout in 2012, was artificially inflated by a .359 BABIP, Moss has since steadied out with a career BABIP of .296 and wOBA of .337. His walk rate has hovered around 8 or 9% while his strikeout rate hangs from 25-30%. If you're willing to sacrafice a lower contact rate for harder contract, Moss proves to be a strong offensive asset.

The concern begins with Moss' worsening plate discipline and his below average line drive rate. The average HR/FB rate is 10%; Moss sits at 21.4% this season. While sluggers like Moss normally exceed the 10% baseline, his career average is down at 15.6%, a nearly 6% difference from his 2016 rate. If Moss' fly balls left the yard at his career 15.6%, he would only have 18 homers this year.

Moss' defensive value (or lack thereof) can't go unnoticed either. He is simply put a defensive liabilty at first base, where his career UZR is -16.2 and according to DRS he's 22 runs below average. In the outfield Moss isn't nearly as bad, in fact he's a shade above average using the same metrics. But Moss is being signed for the next four years, not the previous four.

With a four year contract running through his age 36 season, Moss is unlikely to be able to endure the rigor of playing in the outfield (or the field at all) on a daily basis. Take Matt Holliday for example. From 31 to 33, Holliday was a slightly below average left fielder. In his limited playing since, due to injuries that playing left field likely contributed to, Holliday has been arguably the worst outfielder on the Cardinals roster. While no two players age the same, history shows that Moss would be better fit on an AL team.

I continud my analysis of Moss by lookinging at how position players aged in their mid thirties. Look at the table below. 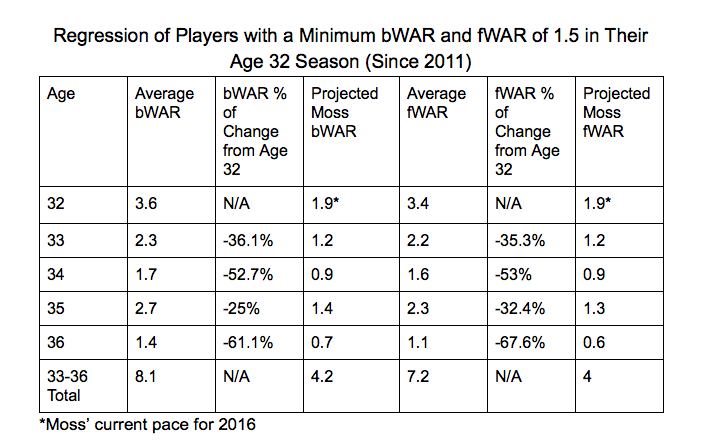 I'm not saying these projections are set in stone: there are obvious flaws in this simplistic method. Like I side earlier, no two players age the same. That being said, trends are trends. There's a direct correlation between age, production, and health. I tested the projection out on numerous players and with the exception of some Cooperstown-bound outliers, players consistently fell within 1 WAR of their projection. Just to be nice let's give Moss some leeway and add an extra 1.5 WAR onto his projections. Even then, for a four year deal to be at market value it would only be worth $45-$50 million.

The Cardinals have enjoyed nice production out of Moss this season, so replacing him would be a natural concern. The Cardinals have various lineup possibilities not only now but in the future. For this excercise let's go as far as to assume Matt Holliday isn't on the 2017 team, though he could easily return next year to add another bat into the mix. It's safe to say that Molina, Carpenter, Wong, Diaz, Piscotty, and Grichuk are "locks" to enter 2017 as starters. That would leave Pham, Adams, Gyorko, and Peralta to tangle for the final two spots in the lineup.

We've already compared Moss to the average MLB player but of more importance is his value relative to other Cardinals. As Moss moves further and further away from 30, he will obviously regress. Let's give Moss an unfair advantage by using his stats this year in comparison to potential replacements. Going forward Moss will regress while Pham, Adams, and Gyorko remain in their prime years.

To test his value compared to other Cardinals I hypothetically placed Brandon Moss on a completely average team. The hypothetical team had a Pythagorean expection of 81-81 by scoring 729 runs while also allowing 729 runs. When taking the amount of runs Moss has created per 600 plate appearences and substituting that number with the runs created by Adams per 600 PAs the team was expected to win 0.8 fewers games. When replacing Moss' bat with Gyorko and Pham the team was projected to win 0.5 fewer games.

This is before we've considered baserunning and defense values, however. I used UZR, which puts a run value on a player's defensive production, to compare Moss and Adams at first base. Adams had a UZR of 1.8 for every 150 games he played. Moss had a UZR/150 of -9.4. Not only would I rather have Pham in left field over Moss defensively, Pham's baserunning ability easily trumps (shoot, I should have chosen a different word) that of Moss. In Pham's career, he has added 4.75 runs on the basepaths per 150 games. Play Moss 150 times and he will cost you 0.5 runs through baserunning. It bears repeating, these numbers don't account the physical regression Moss will suffer in the coming years. At most retaining Moss would add a fraction of a win. Can't the Cardinals at the very least bridge this value gap with the $15-20 million a year Moss expects to make?

This article may have seemed cutthroat, but I'd be lying if I said baseball wasn't. To quote Trey Parker, "Saying goodbye doesn't mean anything. It's the time we spent together that matters, not how we left it." When the Cardinals acquired Moss from Cleveland they were acquiring a year-and-a-half of a power hitter they desperately needed. Before going down with an ankle injury, Moss had been of the most productive bats on the Cardinals this season. As he prepares to make tens of millions of dollars, it's hard for me to justify paying Moss, who turns 33 on Friday, upper tier money for declining production. I write this knowing many of you will argue me with admittedly valid points. With that being said, I rest my case.