Yesterday I published a post detailing my attempt to quantify some possible outcomes for the Cardinals' young position players. In that post I examined Randal Grichuk and Kolten Wong in particular, whereas in this post I consider the potential of Stephen Piscotty and Aledmys Diaz.

I don't want to rehash all of the details of my process, since I'm well aware that my posts often get unnecessarily lengthy. All of the details are in the previous post, and I will repeat some of them as I deem necessary below. In short, I consider three distinct scenarios for each player: fairly pessimistic, moderate, and his ceiling. I calculate WAR according to the model detailed by Fangraphs in this article, with the various constants, all from the 2015 season, taken from the site's extensive database and leaderboards.

With that said, let's take a look at the man (kid? guy? dude?) that the Cardinals' have tabbed to start in right field this season: Stephen Piscotty. My assumptions for Stephen are as follows: 600 PA, -2 BsR (below average), and 5 fielding runs in right field. His table is given below.

The fairly pessimistic scenario sees the power demonstrated by the Stanford graduate regress toward the level he produced in the minor leagues before 2015. In addition, Piscotty's BABIP takes a tumble, leaving him with a batting average and OBP slightly above average and an ISO slightly below average.

That .315 wOBA is .002 higher than the league-average mark in 2015; in other words, the worst scenario presented here for Stephen Piscotty is that he becomes a roughly average hitter. You can that one of two ways: (1) you can be understandably upset at the thought of the Cardinals' former top prospect becoming an unremarkable big leaguer, or (2) you can remind yourself that this is likely near Piscotty's floor, and is still a lot higher than that of many other players. It is exactly by drafting players like this that the Cardinals have made their name over the recent years: relatively high-floor players that have a good chance to put together a string of 3 to 4 solid seasons at the major league level before being shipped out or leaving in free agency.

While I'd love to continue discussing the unexciting version of Stephen Piscotty, perhaps it would be more, well, exciting to move on. The next step up for Stephen sees him hitting for more power, getting on base more, and in general producing results closer to what we would expect after last year's performance. He doesn't run an exceptionally high BABIP this time around, so his average isn't as gaudy, but it's still a solid offensive line. Indeed, all three parts of his triple slash line are noticeably better than the league-average numbers in 2015.

Don't take this calculation as exact, but a .344 wOBA in 2015's run environment is probably around a 120 wRC+. Indeed, Jason Heyward's .346 wOBA translated to a 121 wRC+ last season, and he played his home games in the same ballpark as Piscotty will in 2016, so that estimate checks out pretty well.

You can't tell, but I'm patting myself on the back right now, not only because I guessed well, but also because this is a great opportunity to point out the impact baserunning and defense can have on a player's production, even if that player is a right fielder. My moderate projection for Stephen has him posting nearly identical numbers at the plate as Heyward last year, and yet his WAR total is only half that of Heyward's: 3.0 in 600 PA versus 6.0 in 610 PA. Whereas I'm projecting Stephen to add 5 runs on defense (before the positional adjustment) and lose 2 on the base paths, Heyward added 22.6 and 7.0, respectively. Those are both exceptional numbers, and together they added 3 entire wins to JHey's production last season. Yeah, defense and baserunning matter.

Let's take a look at what I've termed to be Stephen's ceiling. To be honest, I don't actually think this is his true ceiling; if you wanted my honest opinion, I think he can boost it a bit higher than this. Why? If you look closely at the table above, you'll see that Piscotty's home run total isn't the only thing that increases from his moderate projection; I have his BB% rising as well, to a very solid 10%. You may question this, but I have my reasons.

Namely, in 372 Memphis PA last season, Stephen had the chance to repeat the level, but this time with his new swing mechanics that we've read so much about. The result was a dramatically increased walk rate--one that I'm willing to bet was due to the similarly dramatic increase in his ISO. Piscotty never really showed outstanding patience in the minors, with a career walk rate around 8.8%. However, he never used the same swing mechanics or demonstrated the same amount of power that he did in 2015, either. Before last year, Stephen was a hitter who prioritized putting the ball in play. If the changes are real, then I think we'll see Piscotty's walk rate creep up as he gets more experience in the big leagues and establishes himself as a guy who can punish mistakes--if not always for homers, than certainly for resounding doubles.

Barring a sudden increase in his baserunning skills or defensive prowess, Piscotty's strength is always going to be his bat. Even then, he's probably never going to wield exceptional power, so what will be truly important for Stephen will be how often he gets on base. One of the best ways for him to go about improving in that area is to be more selective and take more walks. I'm sure Piscotty realizes that: by all accounts, he's a pretty smart guy. That's why I think that his true ceiling would probably include a Matt Carpenter-like walk rate, in addition to an ISO around .180. That would boost his OBP near .400, and that's exceptional.

Even so, Stephen's ceiling as I've projected it in the table above is nothing to sniff at. Ryan Braun's .366 wOBA translated to a 129 wRC+ in last year's run environment, and I'm sure we'd all be more than happy with that--along with over 4 WAR--from our young, starting RF.

Now it's time to look at our final contestant: Aledmys Diaz. I won't go into specifics about Aledmys' history, but with Jhonny Peralta sidelined for the beginning of the season and Jedd Gyorko not capable of handling the shortstop position defensively, Diaz is probably going to get a shot this season to show what he can do as a starter.

Because Diaz has never played in the major leagues before, I had to go about calculating his table a little bit differently. With the other players, I was able to provide many details about their offensive profile because I calculated their wOBA from scratch using past performance and set thresholds for batting average (in the case of Randal Grichuk) or OBP (for Wong and Piscotty). For Diaz, I had to come up with a different, and admittedly less precise way of doing things.

Basically, I calculated Diaz's wRC+ across all of his (few) minor league PAs and used the 2015 batting leaderboard to translate that wRC+ into a wOBA in-line with the 2015 run environment. Yes, I'm aware of the flaws in this line of reasoning, but it's the best I could come up with, and I think it gives us a fairly good estimate of what Diaz can do at the plate. In order to temper expectations, I set this wOBA estimate as the number that would determine his ceiling, since it really is pretty high, especially for a shortstop. If, in the future, he turns out to be a major league regular shortstop with a career wRC+ better than 125, then you can fault me for not fully buying into the hype.

There's not much to say about my assumptions for Diaz: 600 PA, of course, but I decided to give him average scores for baserunning and defense. I've heard good and bad things about his defense at short, and I have no idea how well he runs, so why not have just leave the null hypotheses alone and assume he's average at both? Here's the table. 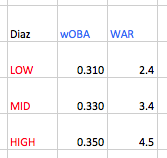 Boy, when you've got an average defender at short with an average bat who's average on the base paths, you've got yourself a player with an above-average floor. There's not too much to say about the low scenario, since I couldn't really calculate any particular pieces of his offensive profile, but Diaz's minor league numbers suggest that he's a contact-oriented hitter with above-average pop and who'll take a walk. I don't see why that wouldn't translate to at least barely below-average offense (league-wide wOBA in 2015 was .313). I could be wrong, but that's kind of the reason the Cardinals' signed him: as a member of the Cuban national team he was coveted for his ability to hit and play defense well. It's a good deal harder to hit in the major leagues than in Cuba (I assume), but I don't think it's unlikely his great offensive numbers in Cuba translate to at least average numbers stateside.

The middle scenario is more bullish on Diaz, giving him credit for a .330 wOBA, which translated to about a 110 wRC+ in 2015. A shortstop who doesn't give back runs on defense and who's better than league-average with the bat is a great asset to have, and it shows with Diaz producing 3.5 wins in this scenario. While not eye-popping, that's very solid production from a position player, and exceptional for a shortstop: only Brandon Crawford and Xander Bogaerts were more valuable at the position in 2015.

In the best-case scenario, Aledmys Diaz posts a .350 wOBA, good for a very solid 126 wRC+ in 2015 Busch Stadium's run environment. Such production at the plate is fantastic when coming from a shortstop, and it would likely make Diaz the newest face of an organization that continues to churn out valuable major league players and occasionally produces a star. 4.5 wins is fantastic production regardless of one's position, but receiving that value from shortstop would be particularly good news for the Cardinals, given the dearth of middle-infield prospects in the system.

Remember, the high scenario is supposed to approximate what I think is Diaz's ceiling; based on his reputation in Cuba and his numbers in the Cardinals' minor league system, I don't think a 126 wRC+ is completely out of the question if everything clicks for Diaz. And even if Diaz does not reach his ceiling (and you should never expect a player to do so), I hope this analysis shows that he can still be a valuable mid- to long-term piece for the Cardinals--and that's without considering the possibility that he might actually provide some value on defense or on the basepaths.

I'll end this post here, but I plan on writing one more that summarizes everything in this post and in the first one. As always, if you have any questions, comments, or disagreements concerning anything I've written here, please don't hesitate to say so below.