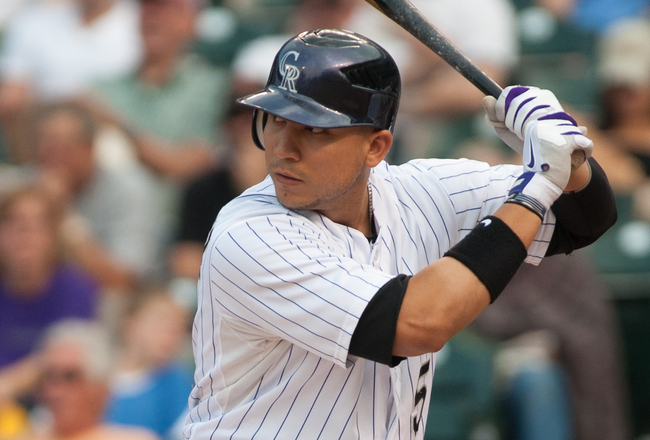 Well the news is in. Jason Heyward has signed with the Chicago Cubs. So Yeah. That Happened. Now we all get to pretend that he isn't worth the money and that he is overrated. Let me describe my current symptoms:

Trying to accept that he's overrated

Curling up in a ball signing The Show Goes On by Lupe Fiasco.

So Now we have to all act like mature adults and get over it. Jason Heyward is an excellent defender. He was a quality hitter, a great base runner, and damn did he have a cannon of an arm. Now lets put ourselves in John Mozeliak's shoes. What would we do. How do we stop Cardinal Nation from burning down Busch Stadium. Obviously we're all upset, its acceptable. We watched Jason Heyward swing, dive, and throw his way into our hearts. But now he is a Cub. a Cub. I know, gross right. It came down to the money and the Cubs offered more. Maybe this means we can lower our ticket and drink prices at the stadium since we're not spending any of it anyways. Kidding. Anyways now its time to Moneyball this shit. We need to execute the mighty plan B. What is plan B you may ask? Well wouldn't you like to know.

Here's the thing. The Cardinals strike out a lot. More than a team that needs a contact hitter like Jason. So if you are going to strike out as much as the Cardinals did this year, you need to implement power. Strikeouts are o.k. as long as it comes with power. That was the sole problem this year for the cardinals.

So Lets think this through. Cardinals are trying to replace Jason Heyward. The man has a quality glove, and a decent bat, but is he worth the money that the Cubs are paying him? Arguably I would say no. But the best part of baseball is coming up with new plans. There are many routes the cardinals could take. Personally, I am in favor of initiating a trade for the Rockies right fielder, Carlos Gonzalez.

These are Gonzalez's splits from the 2015 season.

These would be Heyward's splits.

Obviously Heyward got on base more. But many of us would argue that the Cardinals are in need of a big bat. I mean a BIG BAT. That's where the slugging percentage comes into play. Sure Carlos played majority of his games at the hitter friendly Coors field. But that power can easily translate. Besides, the Cardinals don't need 40 home runs. They just need a little bit more power. They need the power that Heyward is unable to give them. It's not Heyward's fault, but, maybe he should have ate more Wheaties. So I think we can all agree, that Car-go is the superior hitter.

Lets talk about defense. Obviously this is where Heyward's wizardry in right field makes him irresistible. He is clearly the superior defender. But I don't know about you guys....but I wouldn't pay 20+ million per year for a defense first player. Defense is great, don't get me wrong. But I wouldn't break my bank over it.

Base running? Yeah, Heyward snags that too. But again, we aren't a hit and run team. We don't steal bases, and we don't bunt for hits. That's not the team we are. Maybe you wish we were, and sure the royals proved it works, but we just aren't a fast team. The Cardinals are a pitching first team. Thats obvious. So lets surround them with quality hitters. I'm even in favor of trading Wong for a quality third baseman. Because the difference between a power hitter and a contact hitter is one swing. A power hitter can put their team on the board with one swing. That's it. Homerun's are and always will be the most sure thing in baseball.

We really just don't need Jason Heyward. I loved them man, I'm also going to miss the man. But we can get better without him. We just need to open our horizon to other players. That's why Carlos is my first choice for a trade candidate. The Cardinals are missing that one guy. You know, the guy that people try to pitch around because of their firework phobia. The guy who strikes fear into pitchers hearts when they hear his name going through the speakers. Once they get that guy, people will say "Jason who?"

What are you doing right now?