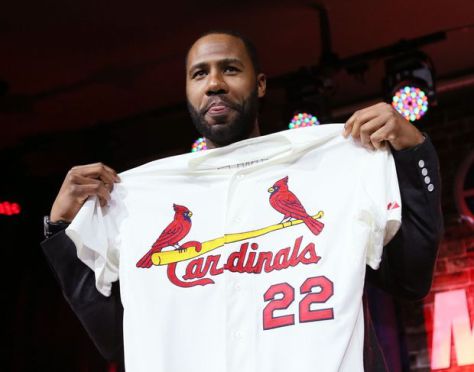 If you asked me a few weeks ago how I felt about Jason Heyward, I would have told you I was iffy about paying him a boat load of cash. But for some odd reason, as the days go on, i'm slowly become irrationally attached to him. I don't know why. Maybe it's the sort of logic behind when children only want a toy when other children are interested in it. You know, when other children are willing to pay 25 million dollars to a player who doesn't belong to them. Anyways, we are reaching the finish line, and the anticipation is killing me. I wish Heyward would just choose a team already so we could all get on with our lives.

Now I understand where the cardinals are coming from. They refuse to pay stupid money, when they can find replacements for a cheaper amount. I also understand where some front office officials are coming from when they say "we won 100 games last year, we don't need to improve". Which is true to a certain extent. But that is also no excuse to let the team get any worse. Take a look at what the cubs have done this off season. They were aggressive, and now they look to be the front runners for the National League Central. Now we can talk about how...you know.... its the "Cubs". "They suck. They wont win. Snarf Snarf". But in reality, they look good. I mean DAMN good.

The issue with the Cardinals offseason to this point, is that they haven't improved at the same pace as the Cubs have. The Cubs got aggressive this off season. They signed the Cardinals most consistent pitcher (John Lackey) and they traded away Starlin Castro for pitching depth. They then proceeded to sign Ben Zobrist to be their new second baseman. I repeat, the Cubs look good, DAMN good. If you dissect each position player and compare them to the Cardinals, it makes sense why people are favoring the Cubs next season. The Cubs saw a breakout season from Kris Bryant, Jake Arrieta, Kyle Schwarber, and Addison Russell. We also saw Jorge Soler tee off Cardinal pitching in the NLDS like it was batting practice.

Now I am a firm believer in good pitching beats good hitting. But if all you have is good pitching, then you become the Met's in the first half of 2015. I like Stephen Piscotty, I think the kid is going to be a hell of ball player. I also think that after next season (assuming the Cardinals purchase the team buyout and cut Holliday loose), Piscotty will be a great left fielder. But if we let Heyward go, and then go into next season with Piscotty in right and platoon Moss and Adams at 1st, then we got worse. At the same time, I believe if the Cardinals are unable to resign Heyward, they will make a trade for either a left fielder or a 1st baseman. But why not secure your future outfield with a long term deal.