Share All sharing options for: Cardinals at Reds Recap: Cards hit a lot, score some, win 5-0 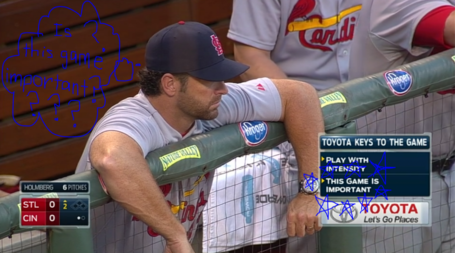 All right, now that that's settled, on to the top of the first and the Reds' starting pitcher:

The 29-year-old righty has a large FIP-xFIP gap in his 17 innings this season, and tha--hold on. What the heck.

Still, the Cardinals hitters licked their chops and bided their time, making lots of contact and taking walks against Holmberg but not producing any runs--which is boring. Let's skip ahead.

This game turned on the top half of the seventh inning, which began with the Cardinals having outhit the Reds but with no runs to show for it.  I'll just say right now that the Cardinals scored only two runs in the inning, but it turned out those two were enough.

First of all, in order to gain a platoon advantage over lefty reliever Manny Parra, Mike Matheny brought in Randal Grichuk to pinch hit for Oscar Taveras (0-2 on the night). While I begrudge every Oscar at-bat Matheny has taken from us this season, this move seemed defensible. Grichuk worked the count in his favor, laying off Parra's curves out of the zone and reaching a fastball count: Parra did indeed throw a fastball, and Grichuk hit the tar out of it to right field for a lead-off double. Randal Grichuk can square up a fastball. I think it's safe to say.

Kolten Wong then hit a hard grounder to the shortstop--to the right of Grichuk--and Grichuk bolted for third, perhaps inadvisedly! But Zach Cozart's throw to third was imperfect and bounced, Grichuk was called safe, and the Cards then had runners at the corners, no outs.

And then? With Shelby Miller up, having thrown just 58 pitches through six innings? Surely Matheny would pinch-hit for him in this situation, the leverage being so high and the world's confidence in Shelby (however efficiently he'd pitched up to that point) still very low. Add in a well-rested bullpen, which should have a better chance of navigating the Reds' lineup a third and fourth time better than Shelbster. Pinch hit, right Mike?

Well no. Not if your plan is to sacrifice bunt anyway, which Matheny's plan was, and which Shelby ultimately did. And with two strikes, too. Anyway: One out, runners on second and third, Matt Carpenter up. WILL THE CARDINALS EVER SCORE? Yes. Carpenter hit a low dying liner to right field that landed just in front of Jay Bruce, who threw home, but glory be: the ball arrived after both baserunners had scored. 2-0, St. Louis.

The rest of the inning was a series of events that produced a fertile run-scoring environment but no runs: Jon Jay walked; Matt Holliday popped out to second; Matt Adams struck out on a pitch that was so in the dirt that it bounced away from catcher Devin Mesoraco: bases loaded, two outs, Jhonny Peralta up.

But I already told you the Cards didn't score again. Peralta struck out to end the frame.

The rest of the game was mostly determined by:

In Aaron's preview of this series, he wrote:

I'm interested in seeing Shelby Miller's pitch selection. Three games ago he invented a sinker and threw it a bunch, and then the last two games have featured the highest percentage (nearly 40% each) of curves of any two games in his career. Will the curveball renaissance continue?

It did indeed. First, Shelby's line:

He allowed one line drive, six ground balls, and, somewhat dangerously, ten fly balls, though two of those were on the infield.

His pitch selection closely mirrored his last start: Of Miller's 81 pitches, 40 were four-seam fastballs, 31 were curveballs, and nine were sinkers (with one random cutter). Shelby commanded his three pitches very well, throwing 54 strikes and inducing three swings-and-misses on his four-seamer and two each on his curve and sinker. Even better news is that his fastball averaged 4.58 inches of horizontal break, which is almost two inches more movement than in some of his early-season starts.

Improved command and improving stuff: I am dipping my toe into the waters of optimism. Keep it going, Shelby.

Tommy Pham is 26 years old, and this is his first call-up to the bigs. He has had a minor-league season derailed or ended by injury so often that the stink of those injuries came to be attributed to him and not to chance or the gods or the sport itself. I wonder how many times he lost it--was injured, realized the gravity of the injury, knew the long road back, and just despaired Old Testament-style. Despaired like Job to his three obnoxious friends, or like that preacher in Caddy Shack who rails at God for allowing him to get this close to perfection, but no closer.

Making the majors is already a preposterous dream even for those toolsy, rangy outfielders who once were considered gifted enough to play shortstop--or even to pitch. So when one of them finally, finally, after nine seasons in the minor leagues, excels at the very last level and earns a call to the majors, it's reason for admiration and joy.

At any rate, DanUp said it better than I can: "Why I Keep Rooting for Tommy Pham." 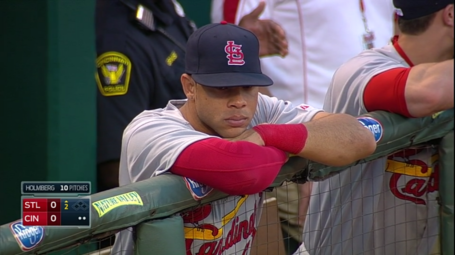 *Cruelly, his coffee is still percolating: he didn't make it into Monday's game.