Jonathan Lucroy says the Brewers are a better team than the Cardinals, but do the numbers agree?

After quickly being overtaken in the standings, the Milwaukee catcher was vocal in what team he believed was superior.

Share All sharing options for: Jonathan Lucroy says the Brewers are a better team than the Cardinals, but do the numbers agree?

The Cardinals are rolling. After winning three of four against the Brewers this past weekend, the Cards were able to put five games between themselves and the Brew Crew. Pittsburgh was able to take advantage of Milwaukee's recent struggles and now sit a half a game in front of them, putting them second in the Central, four and a half behind the Cardinals. After being in first place for 159 days this season, the Brewers find themselves in third place in the NL Central and on the outside looking in in the playoff race.

Bernie Miklasz reported that when asked about the disastrous series against the Cardinals, Brewers catcher Jonathan Lucroy said something very interesting, or at least I thought so.

Jonathan Lucroy on Cardinals: "They always play us good but I still believe we're better than they are. I do." (1/2)

(2/2) Lucroy on Cardinals: "All around, player for player matchups, I believe we are (better.)"

Lucroy, like most other players would, is attempting to stay positive in the midst of a slump, which I find entirely reasonable. He thinks that the team he is employed by and plays on is better than a team he does not play on. Well, duh, of course he does! The timing for such a statement is a little poor, having just lost badly to the team he referenced, but that isn't the part I am really interested in.

Being an inquisitive person who prefers facts to subjective ideas, his statement about comparing player to player made me curious if it were true. And so, I unveil to you a side-by-side comparison of the Cardinals and Brewers fWAR by position: 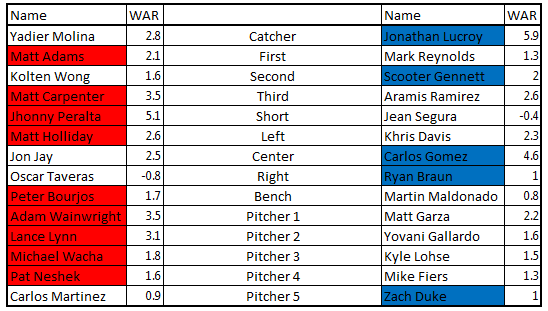 Basically what I did was looked at the Cardinals players for each position and picked the one with the highest fWAR at his respective position. I did the same for the Brewers on the right.

The first thing I found interesting about this table was the dominating Cardinals pitching staff. If I were to just compare starting position players, it would be even four-to-four. However, when you include the pitchers, the table is overwhelmingly red. If Pat Neshek were ranked with the Brewers' pitchers, he would be tied for second with Yovani Gallardo. That is a pretty impressive difference.

One thing you might notice is I did not account for the Cardinals centerfield platoon, nor the Brewers platoon at first base. To keep the table as simple as possible, I did not consider platoons versus non-platoons, but to help account for the WAR being missed, I added a "Bench" position. This position is just the position player that was not included in the starting eight with the highest WAR.

What this table shows is that, frankly, Lucroy is incorrect. Compared position-by-position, the Cardinals have an obvious advantage, especially in pitching. Starting position players is much closer, being four to four - five to four if Bourjos is accounted for on the "bench". The Cardinals team everyone has seen for the past ten days, while yes, are on a bit of a hot streak, are not just getting lucky. The team is actually good and this is what everyone expected and waited for since the beginning of the season.

When Lucroy said the Brewers were better player-to-player than the Cardinals, he probably didn't mean in a snarky fWAR comparison. The Brewers were in first place for 159 days - that is not insignificant by any means. But we all know it isn't who is first the longest, it is who is first at the end - they call this season a marathon for a reason. Baseball has this strange way of ironing itself out at the end, and if Mr. Lucroy is correct, the final numbers will reflect that. Numbers never lie.