The 79-64 Cardinals head to Cincinnati for four games against the 67-76 Reds.

Share All sharing options for: Cardinals at Reds preview, September 8-11

For the first time this season, I have a picture of the Cardinals rather than the opposing team in a preview post. I chose to do so because after a stunning seven game dismantling of the Pirates and Brewers, the Cardinals need only be concerned with their own performance from here on out. So entirely has the landscaped shifted in a week's time that what looked like a mad scramble to the finish now appears to be an easy glide as long as the Birds take care of business, especially in their remaining series with the Brewers.

A little math: The Cardinals have 19 games remaining. If they can go 10-9 over that stretch, which includes just one opponent with a winning record and half the series at Busch, the Cardinals will reach 89 wins. For the Pirates to reach 89 wins, they would need to go 15-5, and for the Brewers to reach that number they would need to go 15-4. Both teams have more challenging schedules than the Cards. 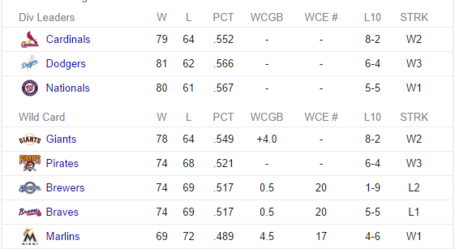 There are a few things to watch here on the Cardinals' end:

As far as the Reds,

Before I go, I asked for a certain pitch to be gif'd from game three of the Brewers series, with the promise that if someone came through for me, I'd feature it here with full credit. cschepers was kind enough to create the piece of art for me. Carlos Martinez' eighth inning ended on an unhittable three pitch K of Lyle Overbay (98 on the hands, 99 on the hands, 89 changeup away), but my favorite moment of the inning was the last pitch to Jonathan Lucroy. Luc struck out on four pitches without lifting his bat off his shoulders. His hips and his face in response to this slider are glorious. Thank you, cschepers. Thank you, Carlos.