John Lackey's declining velocity a concern for the Cardinals

John Lackey has had his share of good and bad performances since coming over at the trade deadline. Some of the poor performances could be due to luck given his track record, but declining velocity on his fastball is not a good sign for the aging right-hander.

Share All sharing options for: John Lackey's declining velocity a concern for the Cardinals

John Lackey's first seven starts provide a good template for using numbers to mean whatever you want them to. To wit:

If you read only Column A above, you would think Lackey was performing perfectly fine, showing exactly why the Cardinals made the trade. Column B presents the opposing viewpoint and highlights an inconsistent performance. He has provided the Cardinals' innings, but some of those innings, due to luck and poor performance have been of poor quality. The most concerning part about Lackey's performance is not the hits, the homers, and the accompanying runs. The biggest concern with Lackey right now is his pitch velocity.

I first stumbled across Lackey's velocity drop prior to his last start thanks to Daniel Rathman. In his piece at Baseball Prospectus last Thursday, he noted Lackey's loss of velocity and explained some of Lackey's performance problem.

Look a little deeper, though, and you'll find five unearned runs lurking in the background, to go with seven gopher balls in just 38 1/3 innings. Opponents are batting .361 and slugging .583 against Lackey's sinker since the trade; they were hitting .241 and slugging .367 off of it before the deal. And it may be worth noting that while only 84 of the 278 (30.2 percent) sinkers Lackey threw for Boston were terminal pitches in plate appearances, 39 of 100 (39 percent) have been during his first month in St. Louis, suggesting that hitters may be looking for the diminished pitch.

Rathman wrote about Lackey's velocity prior to his last start against Milwaukee, where he gave up six earned runs in six innings while striking out six, walking one, and giving up one home run. Below is a graph from Brooks Baseball showing Lackey's velocity by start in his seven starts with the Cardinals as well as his last two with the Red Sox. 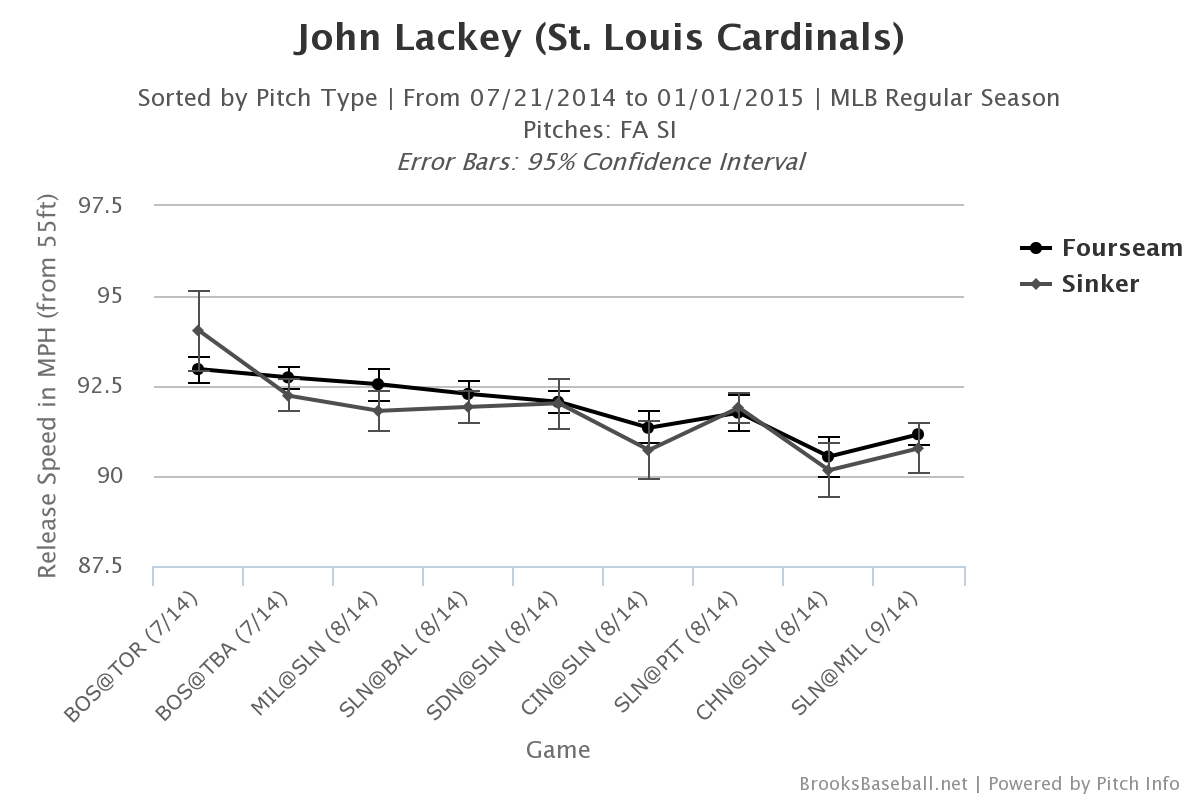 Lackey has lost roughly 2 miles per hour on his fastball over the past two months. The next chart from Brooks Baseballshows is yearly averages in 2011, 2013 (he missed 2012 with surgery which is how the Cardinals will receive his services for 500k next year), 2013, and 2014. 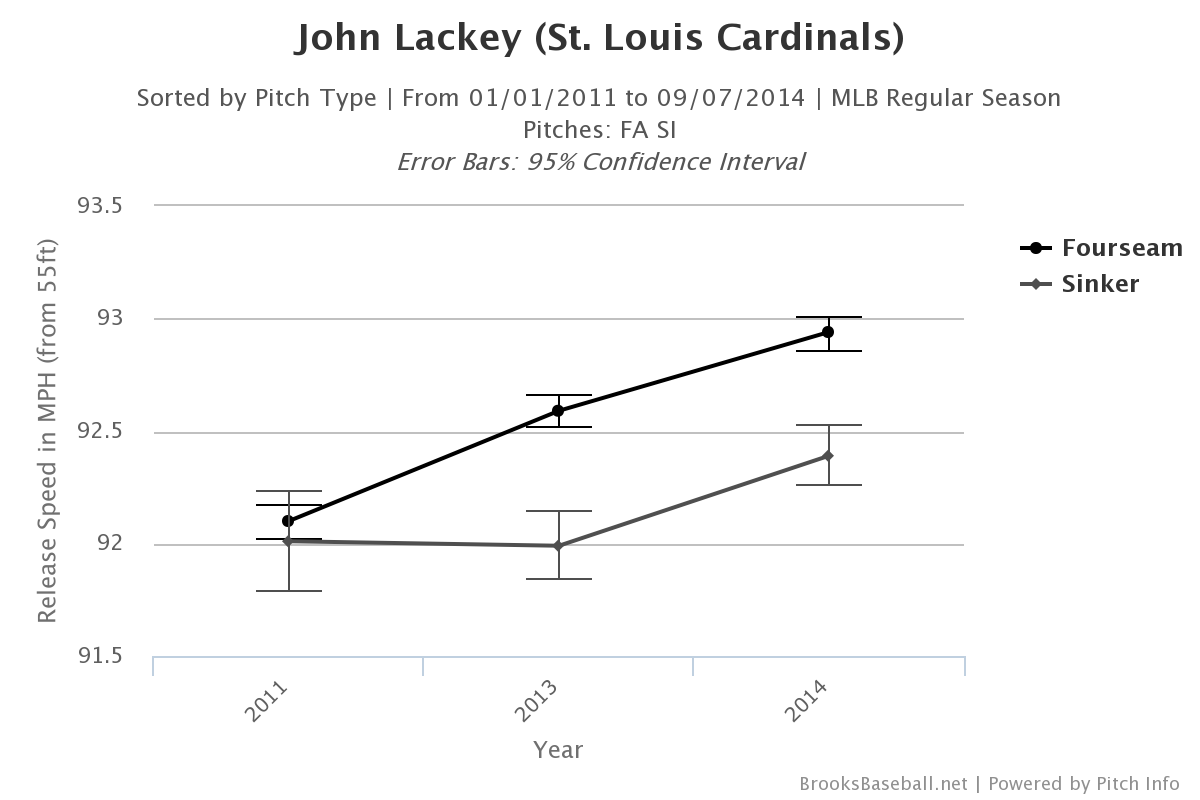 The uptick over the years is not as dramatic as seen on the chart. His fastball and his sinker are between 92 and 93 miles per hour. While Lackey's handful of disappointing starts could be chalked up to a small sample size, when paired with a loss of velocity, it could help explain his inconsistency. Loss in velocity often means a loss in performance, especially when the loss occurs above 90 miles per hour.

Lackey's velocity did move up slightly in his last start. If he can get his velocity back, an uptick in performance is to be expected. If it remains at current levels or drops lower, Lackey may drop himself further down the pecking order if he cannot figure out how to compensate in other ways. Lackey's next start is scheduled for Wednesday against the Reds. We are all interested in the results, but consistent performance the rest of the season could be tied to readings on the radar gun.