Wacha, of course, is back from a shoulder stress reaction injury.  After a single 34 pitch rehab start with Springfield, he was limited to 50-60 pitches tonight. Marco Gonzales was set to spell him in this abbreviated, piggyback start.

Xavier Scruggs was called up today, finally providing the Cards a backup first baseman since the departure of Allen Craig. It's been pretty clear that Matt Adams has been nursing an oblique injury. Scruggs gets into the lineup immediately, and Smash gets the night off.

For the Brewers, Carlos Gomez (wrist) and Ryan Braun (new daddy) were unavailable.

A nailbiter, indeed. After getting out to an early lead, the Birdos stranded 11 baserunners. The Brewers stranded just as many, causing heartburn throughout Cardinalsland and Brewersland (or whatever portion of Wisconsin that wasn't watching the Packers) alike.

The Cards built that early lead in the first. Serial singles by Matt Carpenter, Jon Jay, and Matt Holliday juiced the bases. Jhonny Peralta popped out to right, but not deep enough to get a run home, especially with Parra's arm. (A note for later). But Yadier Molina drove in two on a single, the second runner Jay sliding in just ahead of the tag at home. It was something of a noodly throw by Khris Davis. 2-0 Cards.

In the bottom of the first, Jonathan Lucroy doubled home Gerardo Parra to cut the Cards lead in half. With Lucroy standing at third as the tie run and two out, Jay made a hecuva diving catch to rob Davis of a hit and Milwaukee of a run. 2-1 Cards.

Danny Mac heroically caught a foul back into the booth to no doubt save Hrabosky from certain plunking. Dan gave the ball to a kid who was so impressed, she continued eating her ice cream as though nothing happened. Dan's hand is listed as day-to-day.

In the 3rd, Holliday was hit by yet another pitch. He now leads the league with 17 HBP, surpassing Jay. Yadi walked, then Kolten Wong laid down a patented nice piece of hitting, going the other way for a single and scoring Holliday. 3-1 Cards.

Leading off the 4th, Mark Ellis made his first post-DL appearance to pinch hit for Wacha, ending his night. Why Ellis was pinch hitting there rather than a lefty against Peralta is anyone's guess.

Wacha favored his curve (which looked quite good at times tonight) over his change. His fastball velocity looked good all night. 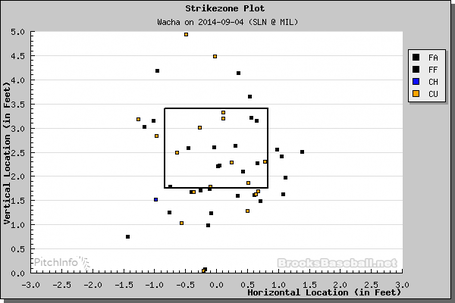 Maybe had a bit of trouble keeping the ball down at times, but he's still knocking the rust off. I think you have to be pretty pleased with this outing.

As planned, Marco Gonzales took over for Wacha. Marco set down the side in order in the 4th and 5th.

But in the 6th, Rickie Weeks drove a pinch hit dinger to dead center, again reducing the Cards to a slender one run lead. Marco got Parra to strike out, but Lucroy singled to short. Apparently Matheny had intended to treat Gonzales as a long reliever rather than a second starter, and that was enough to bring in the bullpen.

Mike called for Jason Motte, also also making his first appearance since returning from the disabled list. Motte gave up a single to Aramis Ramirez. Then Davis hit a deep fly to right that Jay made yet another great catch on, running to the track. After a walk to Lyle Overbay , Matheny had seen enough and brought in Seth Maness to clean up the bases loaded jam.

It was a never ending string of near misses and close calls all night long. Maness put two on in the 7th and Carlos Martinez got Lucroy to pop out to Scruggs to kill that threat. A.J. Pierzynski struck out with two on and two out in the 8th. Peter Bourjos made a sensational catch at the wall to rob Logan Schafer with two on... this game was a 3 hour 35 minute high wire act.

The 9th kicked off with a Grinder single. Jay, one of the hottest hitters on the team, was asked to bunt but drew a walk. Then, as if to top the anxiety of the previous 8 innings, Holliday ripped a grounder to the left side, but it hit Carpenter on the basepath going to third. Unreal. Peralta walked to load the bases. Then Yadi got a fly into right, but not deep enough with Parra's arm. Jay thrown out at the plate. Matheny had a bit of a chin wag with the umps about whether the catcher was blocking the plate, but to no avail.

With the save situation in play, Trevor Rosenthal was brought in for the 9th. This was fraught as well, with Trevor walking Weeks and Lucroy, but he was able to nail down the save and the victory.