The Cardinals head to Milwaukee for a pivotal four game series. 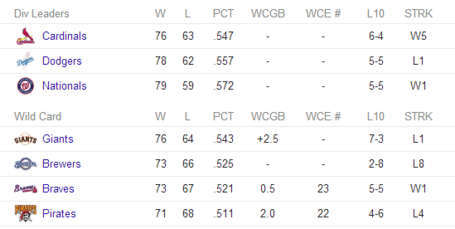 The Brewers come into this series having lost eight games in a row, Carlos Gomez, and the NL Central lead they held most of the season. Not even a sweep by the Cardinals would knock the Brewers out of contention, but if this means that the series is not "must-win" for the Brewers, it's certainly one of those series that everyone will say is "must-win" anyway.

I wrote recently that I believed the NL Central would be won not by one team getting hot and rolling through the month, but by a team that manages to be a slightly better mediocrity than the other two competing for the crown. Despite the Cardinals' sweep of the Pirates, I still expect this to be true. But if my prediction is wrong, if one team does win by getting hot, it's looking less and less likely to be the Brewers who do so.

But it hasn't been all bad. Jonathan Lucroy, Khris Davis, and Aramis Ramirez have continued their strong production, and Rickie Weeks has a nice .276/ .364/ .461 line in his 88 PA since the break. He sits at 998 hits in his career (h/t lil_scooter93)
Most impressively, "whatever happened to" Mike Fiers has been absolutely terrific. He was called up when Garza went on the DL, but it was Jimmy Nelson who was moved to the pen, not Fiers when Garza returned.  Fiers' deceptive delivery and pristine command have befuddled hitters to a 9.86 K/9 and 1.93 BB/9 line over 42 innings. So if you're annoyed when the Cardinals can't hit the guy without the blazing fastball or remarkable looking stuff, remember nobody else can either. He has a 1.93 ERA, 2.51 FIP, and 2.86 xFIP.

All eyes on Michael Wacha and Adam Wainwright.

Joe Schwarz has an in-depth look at Wacha here. If he can work his way into vintage Wacha shape in the coming weeks, it would be a huge development for the Cardinals. Brandon McCarthy has pitched well after his periods of rest when dealing with this condition, so there's reason for optimism. If Wacha's condition becomes chronic, we'll never know if the timing of his return this season was a contributing factor, but it will likely be something folks will wonder about. In the meantime, it's exciting that the Cardinals think his rehab stuff is so good that he's already a better choice to start than Lyons or Gonzales.

Adam Wainwright has insisted he's "just around the corner" from working through his struggles for several starts. He's continued to not look like vintage Adam Wainwright in them, though his stuff is starting to look a little better. Even more than Wacha, I think Adam's performance for the rest of the month is the key concern for the Cardinals, not just as far as their ability to make the playoffs, but what they'll be capable of doing should they reach them.

Finally, Matt Adams has been struggling mightily of late. It'll be interesting to see how much playing time freshly called-up Xavier Scruggs gets against the Brewers' all-righty rotation. Regardless of that, Scruggs should get starts against LHP for the rest of the year, with an opportunity to grab a bench spot doing just that next season. Matt Adams has a .200/.232/.324 line against lefties this season. To put that in context, Daniel Descalso has been a significantly better hitter than Adams against lefties over their careers. Bring on X. Here's a look at Scruggs from Eric Johnson.

edit: I intended to put this in earlier. Bruce Seid, the Brewers' scouting director, passed away unexpectedly yesterday. This article by The Brewer Nation highlights the kind of person he was. It's so very sad.