Cards are now two games up on the Brewers and four on the Pirates.

The Cardinals won again, folks. They won again and the Brewers lost again, and now the Cardinals are two games up in the NL Central.

He induced lots of grounders (52%), and very few line drives (9.5%), and a few fly balls (38%). But about those eight fly balls he allowed: three of them ended up in the outfield seats, creating all four runs for the Pirates.

The first was hit out by Russell Martin, on a cutter that was on the outside of the plate but up a little--not a terrible pitch at all, but Martin hit the tar out of it. Strangely,

The next time Martin came to the plate (after Jordy Mercer homered on a 90mph middle-in sinker to lead off the third), Waino and Yadi decided to start him off with the exact same pitch that Martin had just homered on the last time he was up: cutter to the outside edge of the plate. Waino's pitchability and Yadi's pitch-calling are considered to be fantastic, so I'm going to go ahead and assume that this was a brilliant decision.

And it worked out! Martin fouled off the cutter to the first-base seats. The count went to 3-2 and Waino threw that same cutter again--to the outside edge of the plate, slightly up and not down where Yadi wanted it--and Martin again fouled it off to the right. Finally, Wainwright threw an 88-mph cutter down and middle, and it was beautiful: just a bit slower than the previous cutters, in a different area of the zone, the ball starting inside, and in a count where Martin was going to be aggressive. Here's BrooksBaseball: 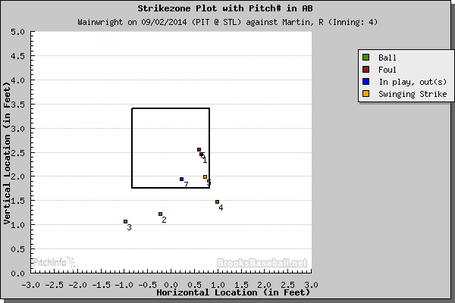 The swing Martin did put on that final cutter was off-balance and defeated, resulting in a groundout to third base. Rejoicing.

Unfortunately, the GOBs are jerks and pitching is hard and the line between a good pitch and a bad pitch is pretty often inscrutable. And so it was that Waino's third and final homer allowed came against his final batter of the night: Starling Marte, in the seventh, on a cutter down but above the plate. Basically the same pitch Wainwright had used to make Martin look so foolish: 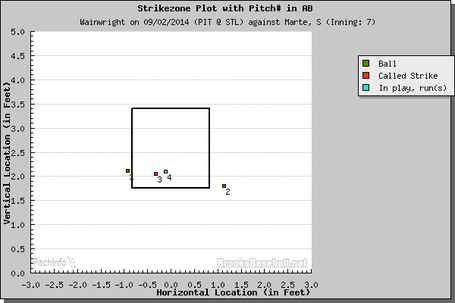 The home run scored two and brought the Pirates to within one run of the Cardinals. So let's say it was a below-average start for Adam Wainwright. And though I'm tempted to try and claim that he was just unlucky with how many of his fly balls ended up as homers--that wouldn't be fair, because the Pirates really hit the tar out of the ball a few times. Like, into Big Mac Land, where balls rarely go. He also struck out only three batters, got only five swings-and-misses on the night, and benefited from great defense behind him.

A disappointing night, then, for Adam, on the mound...

...but in the batter's box Waino acquitted himself *quite* well.

Scoring runs is very important, but so is preventing them. Sometimes your all-star pitcher gives up home runs at an alarming rate, and so it becomes very important to take those balls that do stay in the park and convert them into outs.

Randal Grichuk, whose forearms are being touted as Holliday-esque in some parts, batted second and went 3-4 on the night. But more impressive than his 104.3-MPH singles and his woulda-been-a-dinger foul balls was the catch he made in the fourth inning to save a run: tracking a Starling Marte line drive into right and, with wonderful closing speed, he leaped to catch it. Leaping in the air just like a damn jaguar: 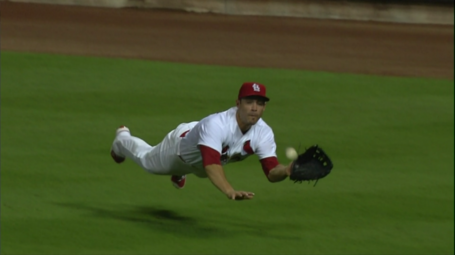 A great play. A great play for sure...BUT, Dan McLaughlin, I'll need you to please reconsider your rash words:

"Does any other outfield wearing the birds on the bat make this play?"

In the top of the fifth inning, with a man on first and two outs, Andrew Lambo hit a grounder past a diving Matt Adams and to a sliding Daniel Descalso. He grabbed it, turned his back to first base, and executed a great contrapposto throw to Wainwright at first base: 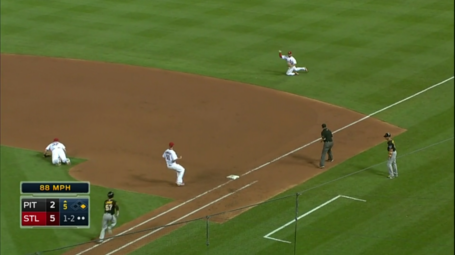 It really is fun to root for Descalso when he succeeds.

Let us now praise Seth Maness: He entered the game in the seventh in relief of Wainwright, with no outs and the Cards having only a one-run lead again. Here's what our Seth did:

Both strikeouts came on Maness's changeup, and all but one of the grounders came on his sinker. Which is just about how you'd draw it up. Well done, Seth Maness.

The Cardinals go for the sweep on Wednesday: Shelby Miller versus Edinson Volquez, 12:45 central.

editor's note: I don't see anything from RB in the queue yet this morning, so we'll call this the daily thread while we wait.