Did a rotation turn off resurrect John Lackey's dead arm?

It appears that a rotation turn off has rejuvenated John Lackey's once-dead arm.

Share All sharing options for: Did a rotation turn off resurrect John Lackey's dead arm?

The concerning velocity drop on John Lackey's fastball precipitated the veteran righty declaring that he was afflicted with a case of the dead arm and explaining that he was experiencing some troubles getting his throwing shoulder loose. The Cardinals responded by giving Lackey a rotation turn off, much to the salty bulldog's chagrin. Dead arm being more a nebulous baseball term of art than concrete medical diagnosis, so it was unclear whether the short respite would successfully resurrect Lackey's throwing arm to the point where he could again be effective. The early returns are that Lackey's short break did the trick.

We'll check in on Lackey today using the indispensable Brooks Baseball. Some of this terrain has been covered in Craig's piece sounding the alarm on Lackey's declining velocity, so I don't want to double-back on that ground too much. That being said, we need a point of reference.

At the beginning of the year, Lackey's fastball had some serious zip. From April through June, Lackey's fastball was averaging 93.5 mph. In August and September, the average speed of the righthander's fourseamer dropped about two miles per hour. It's easy to see this and panic, but I'm not so sure that's the best reaction. After all, Lackey hasn't averaged that many miles per hour on his fourseamer much during his career.

The following chart from Brooks Baseball shows Lackey's fourseamer and twoseamer velocities throughout his career, by monthly average. 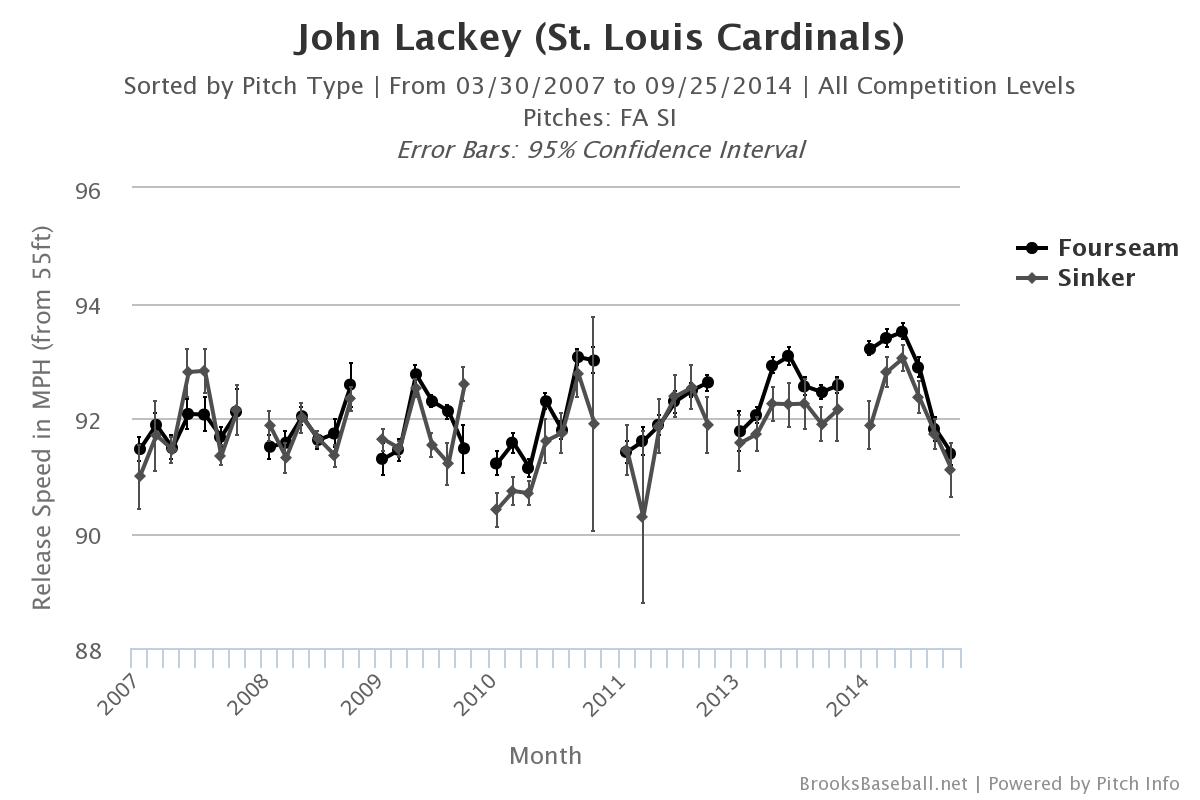 Broken down by year, here are Lackey's average fourseam and twoseam velocity averages. 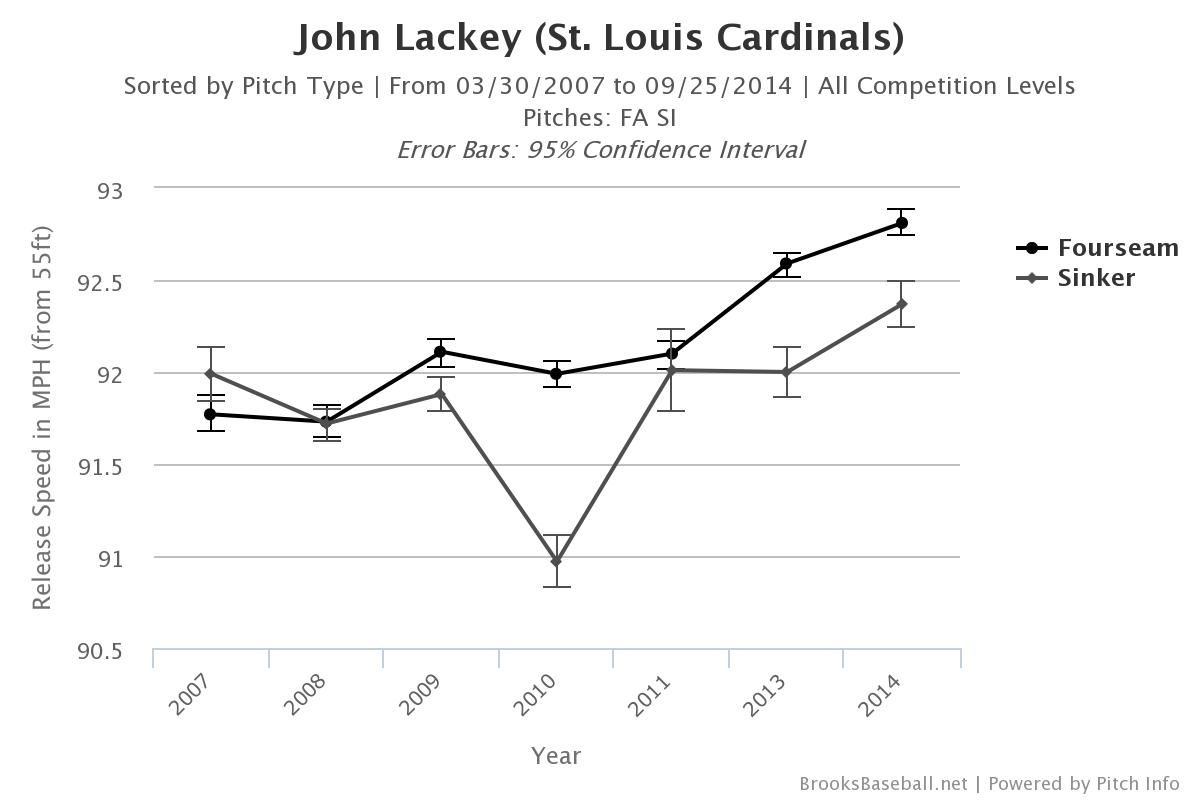 When asked about the dip in his velocity, Lackey quipped to St. Louis Post-Dispatch columnist Joe Strauss:

"I’m 35. It’s not going to go up. At the beginning of this year I was still able to hit 94. I think it’s still in there when things get a little bit more intense down the stretch."

Yet that's exactly what happened in 2013 and 2014. At least until this season's All-Star break. 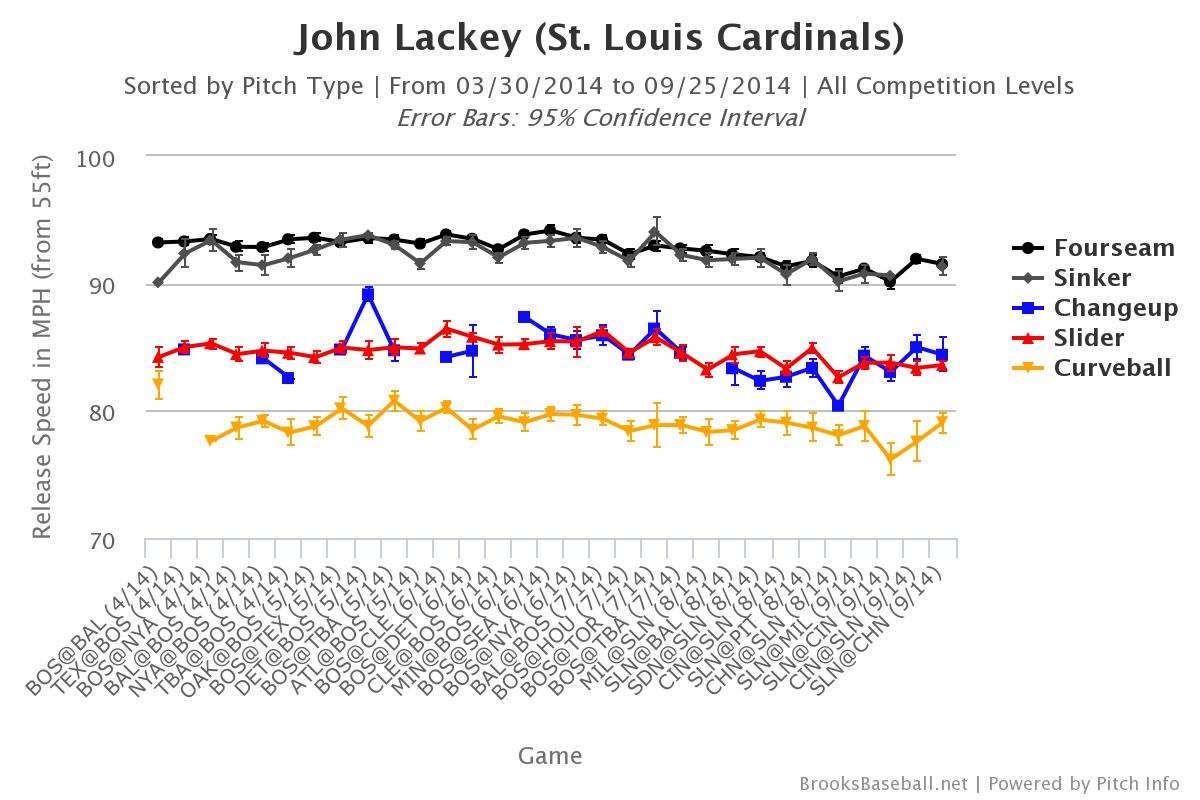 Lackey's fastball velocity has rebounded his last two starts, both of which have come after the Cardinals elected to give Lackey a break in the hopes of rejuvenating his dead arm. This week, Lackey conceded that the time off did him some good. From STL Baseball Weekly's Brian Stull:

Although he had preferred to pitch through some arm stiffness, Lackey admitted that he being skipped for a turn in the rotation had resulted in him feeling stronger in that last start where he went 7.2 innings and scattered six hits while allowing only one run.

"The ball was coming out better," he admitted. "And when you don’t have to manufacture effort, it’s easier to locate."

Lackey's results reinforce his statement. Against the Reds on September 19, he induced swinging strikes 9.2% of the time. For the season, Lackey's SwStr% is 9.7%. Lackey's SwStr% against Chicago on Wednesday night was 18.7%—his highest of the season. It appears that a rotation turn of rest has done the trick.

While his average fastball speeds aren't approaching April-June 2014 levels, they're close to his career rates. And that has helped boost his effectiveness on the mound these last two starts. All in all, Lackey's zombified pitching arm is looking pretty good as October approaches.