Share All sharing options for: Revisiting the tenth inning of last night's 4-3 loss to the Chicago Cubs

Up to this point in the season, true #Mathenaging posts have been written exclusively by Ben, but after witnessing, comprehending (well, trying to, at least), and discussing what occurred in the tenth inning of last night's 4-3 loss to the Cubs, I figured it was as good a time as any for me to write one as well. Also, in case you missed it, I briefly discussed what took place in the tenth inning on the KMOX Sports Hub with Chris Hrabe after the game last night, and you can find a link to the audio here (the link wasn't updated when I wrote this so keep checking back if it still isn't after this post is published).

But, now, let's expand on some of the thoughts I shared on air...

First and foremost, what was the reasoning behind giving Pat Neshek a second inning? A very reliable source has informed me that Neshek, like many of his teammates, has been recovering from an illness the past few days, so why not ease him back in after having a successful inning of work? Sure, it required only 13 pitches for him to get through the ninth, but he has thrown his most innings in a season since 2007 and luckily for Matheny, rosters are expanded, giving him at least a handful of options for the tenth. Would any of the available options have been better than a second inning of Neshek? Maybe not, but it is still the manager's responsibility to put his players in the best position to succeed.

The fact is, Neshek remained in the game, and after inducing a ground out from Jorge Soler, he was one out away from extending the game to the eleventh. Left-handed hitting Luis Valbuena was due up with the winning run standing on third base. If Matheny was not going to bring in one of his left-handed reliever options (of the four available LHPs, Tyler Lyons and Randy Choate had already been used), then intentionally walking Valbuena with two outs and the winning run ninety feet away from home is a perfectly reasonable decision. Valbuena has a 76 wRC+ versus LHPs, as compared to a 126 wRC+ versus RHPs. Despite the development of a devastating changeup, Neshek had no business facing Valbuena and because of this, Matheny called for the intentional walk to get to right-handed hitting Welington Castillo.

Well, retiring major league hitters is not easy. Retiring major league hitters, who are also pretty good like Castillo, after lobbing four straight pitches out of the zone is even harder. Now, I don't currently have statistics to back up this notion, but it is understandably difficult to "bear down 100%" after issuing an intentional walk. No pitcher will openly admit it, because it will question their manager's decisions, but I'm not in the least surprised if it takes one or two pitches for the pitcher to get recalibrated with the strike zone after throwing four straight balls. Neshek threw two pitches to Castillo—both breaking balls out of the zone—and unfortunately, the second one was more of a "spinner" and was sitting on a tee for Castillo to drive to the gap.

Off the bat, if you thought Castillo's flyball would result in out number three, you are not alone. Bourjos was brought into the game in the bottom of the ninth for defensive purposes, and as we have seen all season, if the ball is in the air long enough (as Castillo's was), there is a really good chance he catches it. Yet, why was Peter Bourjos playing in with two outs and the winning run at third base in the bottom of the tenth inning? Who knows. Upon reviewing the Castillo's spray chart from this season, one is really left to wonder: 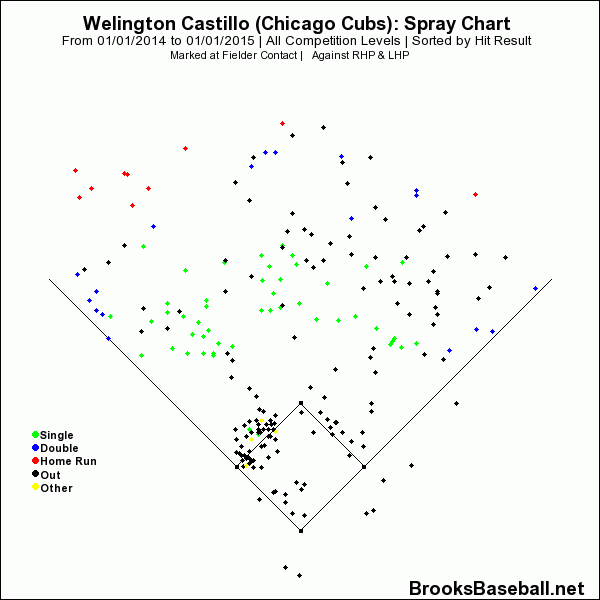 As you can see, Castillo has had his fair share of deep fly balls to right-center field in 2014. Thus, the fact that Bourjos was playing in is inexcusable. However, the majority (virtually all) of the blame should be placed on Matheny and his coaching staff, particularly Jose Oquendo, who is in charge of defensive positioning and shifts. If Bourjos was naturally playing in due to his terrific ability to go back on the ball, at least one member of the coaching staff should have noticed, stopped the game, and re-positioned him. If Bourjos was playing in because the coaching staff specifically asked him to, then that's an even bigger issue. It would be nice to have Bourjos take away a flare hit by playing in, but Castillo's spray chart implies that this is not all that likely to happen.

In conclusion, was last night's game lost in the tenth? Technically, yes, but as many have already noted, the offense just cannot fail to score in the top of the eighth after a lead-off double by Matt Holliday with Matt Adams (4), Jhonny Peralta (5), and Yadier Molina (6) due up. Poor offensive execution is not on Matheny in the slightest. However, this doesn't mean his tenth inning decisions are without fault. Even if Matheny managed the tenth inning differently, the Cardinals still could have lost, but it is his job to put his players in the best position to succeed, and he failed at doing this (in the 158th game of the season).