In 2011, the Cardinals fielded a starting eight that averaged over 30 years of age. Over the past few seasons, the Cardinals have made a series of moves resulting in its youngest team of position players in more than two decades.

Share All sharing options for: Cardinals take young roster towards the playoffs

As the Cardinals inch closer to the playoffs, they have leaned on their veterans, with 31-year old Yadier Molina providing stability to the pitching staff and catcher position, 32-year old Jhonny Peralta having a stealth, near-MVP level season, and 34-year old Matt Holliday, putting up an incredible second half with a .286/.375/.541 slash line to go with 14 homers and a wRC+ of 159 in 251 plate appearances since July 10th. After those three, however, every significant contribution has come from a position player under 30, ranging from Oscar Taveras at 22  to 29-year old Jon Jay.

Getting younger is not a new trend for the Cardinals. They have gotten gradually younger every year since winning the World Series in 2011. Below is a chart showing the average age of all contributors (minimum 200 PAs) as well as the playoffs starting eight. I was forced to make a few judgment calls on the starting eight. I went with Allen Craig ahead of Matt Adams in 2013 given that Craig was the starter all year long. I also went with Taveras ahead of Peter Bourjos for this season, although it is unclear how Mike Matheny will divvy up playing time come the postseason. 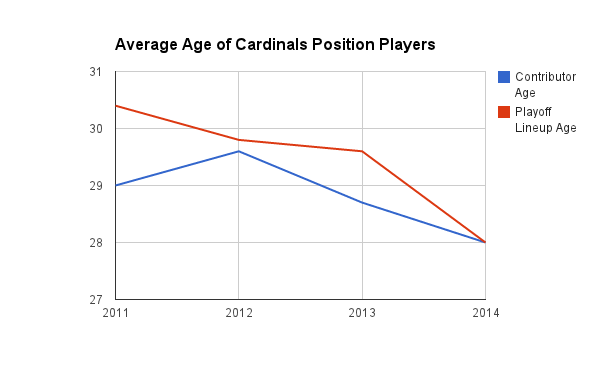 Using Bourjos instead of Taveras would move the lineup age up to 28.6, but still a full year younger than the squad that made it to the World Series last season. Lance Berkman, Carlos Beltran, Rafael Furcal were all jettisoned in recent years. Even the moves to let Skip Schumaker and David Freese go have made the team younger. Consider one potential lineup: 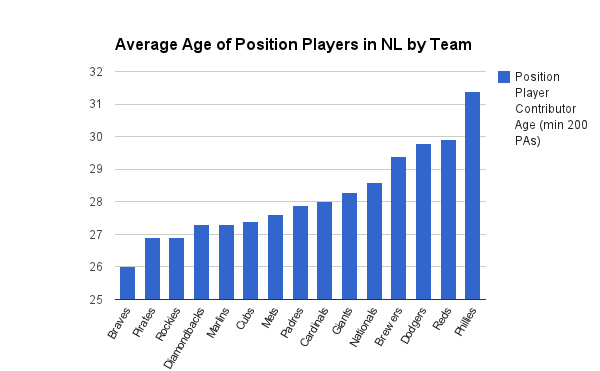 The Cardinals rank in the middle of the pack in terms of National League teams, with the Phillies at the high end showing how difficult it is to compete on a yearly basis when keeping together an aging core. Looking to the left of the Cardinals with the younger teams shows how difficult it can be to compete using solely younger players. The Braves competed and were very young, but they also had only eight players accumulate more than 200 plate appearances. Only the Pirates fielded a younger team and are likely to make the playoffs. The Cardinals have ten players with more than 200 plate appearances with Mark Ellis (who I'll get to) and Daniel Descalso not too far away from the threshold (which is admittedly arbitrary).

Boiling the above list down to the five likely playoff teams shows a slightly different picture. Here are the average ages of the likely lineups once the postseason begins. 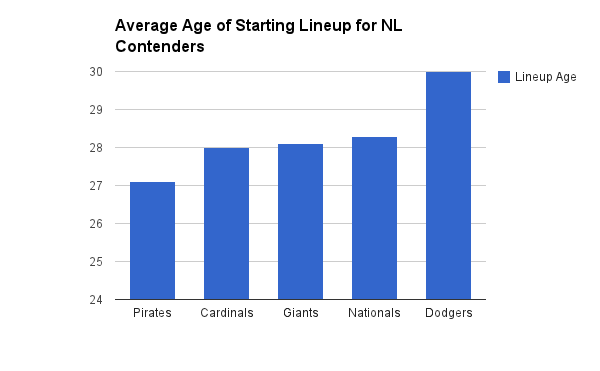 With the Dodgers on the aging end and the Pirates youth on the other, the Cardinals fit in nicely with the Giants and Nationals. Both the Giants and Cardinals have continued to compete at a high level while remaining young. The Pirates have a terrific young group of position players and good young pitching, but lack the rotation depth that would have them a mid-90 win team.

The group of Cardinals contributors is a historically young one for the team dating back two decades. Looking back year-by-year at position player contributors, the Cardinals have not had a team average 28 years old or below since 1993. That season, Joe Torre managed a group headlined by ace Bob Tewksbury and .342 hitting Gregg Jeffries along with Bernard Gilkey, Ray Lankford, and a still effective Ozzie Smith. That team won 87 games and missed the playoffs, although if the current setup had been around, they would have won the Central Division. Getting back to Mark Ellis, he currently sits at 199 plate appearances. Once the 37-year old gets another, he will push the Cardinals contributor average age to 28.8 and above a few other teams in the past few decades.

The narrative entering the season focused on defensive improvements, but the moves also served to get the Cardinals younger. Every move to improve the Cardinals defense also made them younger. Trading 30-year old David Freese allowed Matt Carpenter to return to his natural position at third base. Kolten Wong replaced Carpenter and provided adequate defense at second. Peter Bourjos was acquired in the Freese trade to upgrade centerfield from Jon Jay, and Allen Craig was supposed to be at least as good as an aging Carlos Beltran.

The moves did not go exactly as planned with Bourjos and Wong each losing their jobs just weeks into the season. The Cardinals defense has been improved, but Jon Jay has been getting the majority of the starts in center while the trade of Allen Craig has provided more opportunities for younger players like Oscar Taveras, Peter Bourjos, and Randal Grichuk. Wong eventually regained the second base starting job. As the Phillies have shown, it can be very difficult to maintain contention year in and year out. The Cardinals have introduced multiple young players to their aging stars, putting themselves in position to compete this year and into the future.