After the All-Star break, Adam Wainwright struggled. After working through what he called a dead-arm period, Wainwright's stuff and velocity are back as the Cardinals head towards October.

Share All sharing options for: Adam Wainwright's dead arm period is over

At the All-Star break, Adam Wainwright turned in the best half-season by a pitcher in the National League. In 138 innings pitched, Wainwright had a league-leading 1.83 ERA. His Fielding Independent Pitching (FIP) also topped the league at 2.51 and he had built a half-win lead on his nearest competitor in fWAR at 3.4. Clayton Kershaw missed the first month of the season and Wainwright took advantage in the Cy Young race. After the All-Star break, Wainwright struggled, succumbing to the mysterious dead arm.

In Wainwright's first nine starts after the All-Star break, he was far less effective than his sterling first half, posting a 4.82 ERA and 4.34 FIP in 56 innings. He gave up six home runs during this period after giving up just four the entire first half. In just three starts in the first half of the season Wainwright gave up three runs or more, but he gave up at least three runs in seven of his first nine second half starts. His strikeout rate went down, from 7.5 K/9 (21.7%) to 6.1 K/9 (15.4%). His walk rate went up, from 1.8 BB/9 (5.1%) to 3.1 BB/9 (7.7%). Despite not being at his best, Wainwright did gut out five quality starts and went at least six innings in seven of nine starts.

There is nothing glaring in those numbers to indicate why Wainwright struggled. As Ben wrote yesterday in reference to John Lackey's dead arm

The term "dead arm" isn't a medical one. You won't find it in a medical text book as an orthopedic diagnosis made only of baseball pitcher's arms. It's more a term of art, used by Baseball Men, in the dog days of summer and infancy of autumn, to describe a pitcher who is not quite himself.

After his last three starts, Wainwright's dead arm appears to be undead, and his zombie arm has proved very effective. Over his last three starts, Wainwright has gone the distance in two of his starts and pitched eight innings in the third. In his first nine starts of the second half, he failed to pitch more than seven innings in every start. He has given up just two earned runs, good for a 0.69 ERA. He has allowed just three walks in 26 innings, good for a 1.04 BB/9 (3.1%). Combining the low walks with no home runs allowed over that period results in a FIP of 2.09. Even if he allowed home runs at a more expected rate, his xFIP is still a very low 2.52, likely related to a high 60% ground ball rate.

Wainwright's strikeouts are not yet back to where he would like them to be. In his last three starts, he has a K/9 of 6.2, although due to the low number of walks and baserunners, his K% is a decent 18.8. His strikeout rate is still below the last few seasons, which were in the low 20s for strikeout percentage. However, Wainwright showed last night he can still bring the heat we needs to. According to the raw data not yet calibrated by Brooks Baseball, here are Wainwright's velocities from the ninth inning last night. 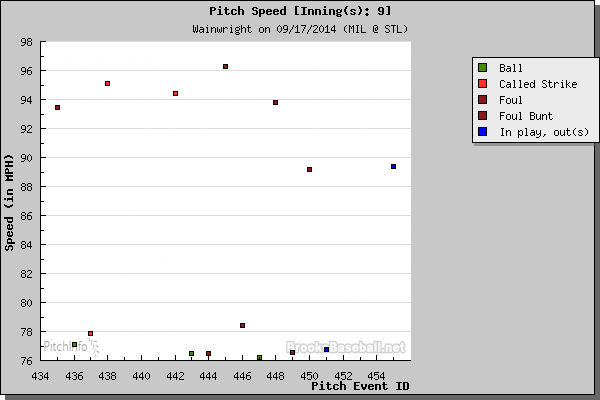 Wainwright had five pitches above 93 miles per hour, three above 94, and one pitch above 96 miles per hour. If that velocity holds after calibration, it would be Wainwright's fastest pitch of the year as he had yet to top 95 miles per hour this season. He did not top 96 miles per hour last season until October. In the playoffs last season, Wainwright pitched 35 innings, struck out more than 25% of hitters, walked just 2.2%, and gave up one home run for a 2.57 ERA and 1.73 FIP.

Wainwright struggled coming out of the gate in the second half, and once again he will finish the season without a Cy Young as Kershaw has blown past everyone. However, whatever problems Wainwright had appear to have dissipated. Three starts is not a lot to base conclusions on, but when those three starts conform to a years-long track record present a few months prior, there is a lot more confidence in declaring Wainwright back. Those nine starts could have been random fluctuations that happen throughout a season. Whether it was a dead arm, a now-living zombie arm, or Cardinals Devil Magic, Wainwright looks ready to face down any competition.