The Cardinals have more than one magic number, so to speak. Here they all are.

On Twitter last night, the Viva El Birdos crew was posed an interesting question: What is the St. Louis Cardinals' magic number to secure the second MLB wild card berth? I found the question interesting because magic numbers tend to focus in on head-to-head races. When it comes to teams chasing a division crown down the pennant race's home stretch, it's amazing how often the race is reduced to two primary competitors. Sure, there's often another team somewhat in the picture around the bend, but the reality is that it's a two-team race. Not so with the wild card, especially after MLB expanded the playoff format to include a second such berth and play-in game.

So the question from one of VEB's readers got me to thinking about the Cardinals' magic numbers. They have their magic numbers against the Pirates and Brewers in the Central race. Those numbers are relevant to the wild-card standings as well, since the Pirates currently sit in the second wild card slot with the Brewers behind them. Then there are the Giants, who are in the first wild-card slot at present—the Cardinals have a magic number when it comes to them, too. Theoretically, the other two division leaders, Los Angeles and Washington, are also still in the wild-card picture, but the Cards' magic number relating to those two clubs has more to do with home-field advantage than postseason qualifying.

So I thought we could take a look at all of the Cardinals' magic numbers this morning.

Before we do, a reminder of how a team's magic number is calculated as it relates to another team. The formula (for any sport) is the number of regular season games plus one. From that you subtract the number of wins for the team whose magic number you are seeking and the number of the losses for the primary competitor.

Remember that the magic number is reached by a combination of Cardinals' wins and the other team's losses. So the Cardinals could theoretically go 0-10 for a stretch and, if the Pirates also went 0-10, St. Louis would be guaranteed of finishing ahead of Pittsburgh in the standings.

Using the above formula, here are the Cardinals' magic numbers against the handful of clubs currently in the MLB postseason picture through play on September 15. I've subdivided the six primary playoff race competitors into three groups (division, wild card, and home-field advantage), but keep in mind that every one of these teams has both wild-card and home-field advantage implications, including the Pirates and Brewers. The Cards can elbow out either of them for a wild-card berth just the same as the division title. 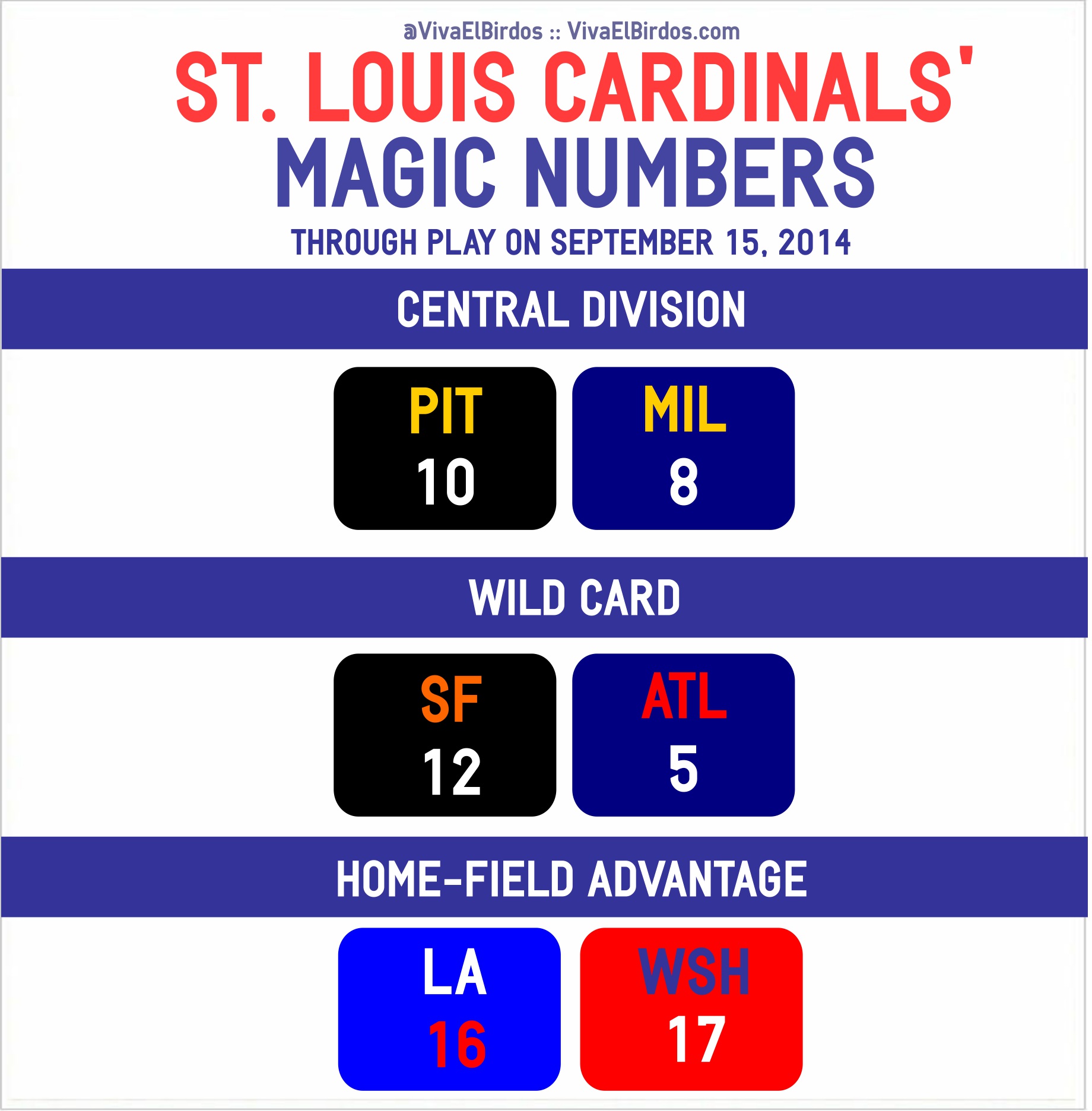