So far in this series, the Birds have looked pretty good.  We got a good/great outing from Shelby Miller.  Matt Holliday has homered twice.  The offense has put up a 5-spot on the Rox in each of the last two games.  At the time of the series preview, brought to you by Mr. Finkel himself, we were anticipating Michael Wacha starting this game, and instead, team management thought it might be better to give Wacha a breather and start Marco Gonzalez instead.  Here's a Ben Humphrey piece on the very topic.

Marco had a little trouble finding the strikezone early.  In the first and second, he threw 38 pitches.  He only walked two in those two innings, but was falling behind hitters, and one of those walks (Matt McBride) scored on a base hit by Brandon Barnes in the second.  Rockies up 1-0.

After a 1-2-3 third, Marco issued another two walks in the fourth.  He was able to work around the runners, but in a rather inefficient manner.  Marco finished strong and efficient, though.  He threw another 1-2-3 frame in the fifth (only 7 pitches!), and allowed two singles in the sixth to finish his day.  Seth Maness came in to get the last out of the sixth.

Randy Choate struck out Charlie Blackmon to lead off the seventh.  Carlos Martinez came in and ended up giving up a triple to the speedy Drew Stubbs, but left him on (aided by a Peter Bourjos diving catch).

Pat Neshek came in to pitch the eighth for the Cardinals.  He was dominant, making up for his shaky night last night.  He retired the three batters he faced, including 2 via strikeouts.

Trevor Rosenthal's ninth was the best part of this game.  As much as I've enjoyed watching him deploy his changeup with success this year, today was all about the gas.  Here's the speed graph to the pitches he threw today: 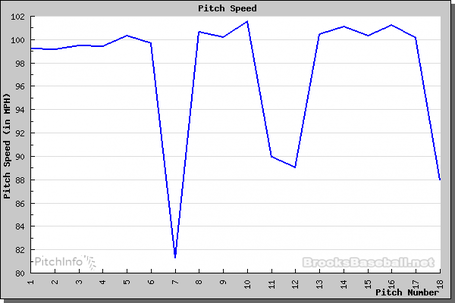 See the line that represents 100 m.p.h.?  See the pitches charted up above that line?  That was fun.  He threw 3 changeups today, including the game-ending strikeout pitch to Charlie Blackmon.  The Blackmon at bat was a lot of fun.  Charlie worked a 10-pitch at bat, seeing 7 pitches of 100 m.p.h. or more and three excellent changeups (Brooks classifies one as a 89.9 m.p.h. "fastball", but I don't think so).  It was the sort of save that looked a lot like one that he was throwing this time last year.  Here was the result of his outing: Rick and Dan had some fun with the scripting of Matt Holliday's inevitable first-inning home run, even throwing out some Boom! goes the dynamite references, but alas, the big Cardinal left fielder lined out to center to end the inning.

The Cardinal offense got something brewing in the second. With one out, Oscar Taveras ripped a line-drive single to right field, Yadi ripped a single of his own to left, and Daniel Descalso worked a walk to load the bases.  With two outs, Gonzalez stepped in to help himself, and put a good swing on the ball, but unfortunately Josh Rutledge foiled his plans, taking away an up-the-middle grounder that probably would have scored two.

In the third, Matt Carpenter led off with a single, but was retired when Jon Jay grounded into a forceout (a near double play).  With Jay on first, and Holliday batting, Lyles tried a little pickoff move that got past Michael Cuddyer at first, allowing Jay to advance to second.  Holliday doubled him in.  Then Jhonny Peralta stepped up.  He knocked a dinger to the left-center seats to score two more.  Cards lead 3-1.  Taveras also collected his second hit in the inning.

Marco showed off his prowess at the plate once again in the fourth, doubling down the left field line.

Yohan Flande took over in the seventh.  Holliday continued his assault on his old team by rocketing a double to right.

In the eighth, pinch hitter A.J. Pierzynski led off with a single.  Greg Garcia ran for him.  Molina sent a ground rule double over the head of Charlie Blackmon to get runners on first and third for Mark Ellis, pinch hitting for Kolton Wong, whom Ricky deemed "jumpy" or "jittery" at the plate today.  He grounded the ball to the pitcher.  Garcia stupidly tried to come home on the play, and got thrown out.  Molina advanced to third on the play, however, and then scored on a wild pitch from Rex Brothers.  Cards lead 4-1.

Descalso legged out an infield hit, clear to everyone except the umpire at first base.  Luckily, Major League Baseball instituted a replay system, in which plays that have been called incorrectly can be corrected.  Mike Matheny used his challenge with success.  Unfortunately, it didn't matter, as Descalso and Ellis got stranded on the bases.

Tune in Tuesday as the Milwaukee Brewers come to town.  Wily Peralta will take on Lance Lynn.  First pitch at 7:15 CT.