The Cardinals begin their final homestand of the 2014 season with a three game series against the Rockies. It is pivotal. Everything is pivotal. 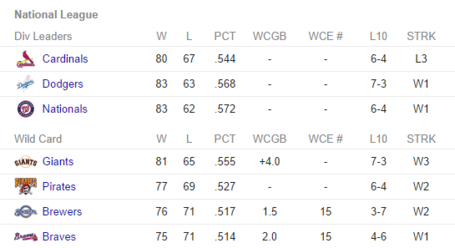 Keep Ben's chart handy, and add a loss for the Birds and win for the Brewers and Pirates since it was posted. Let's hope today is a better day. The Cardinals' magic number remains at 14.

As was the case last series, I'm watching the starting pitching closely. Is Wainwright's dead-arm a thing of the past? His complete game against Milwaukee was heartening, but the lack of strikeouts (three in the game) are still a little concerning. There's a difference between Wainwright pitching well without his best stuff and Wainwright pitching with his arsenal fully functional. I'm hoping to see signs of the latter.

Shelby Miller has allowed two runs in his last three games (seven IP each) while suddenly featuring his curveball around 40% of the time. This is a big development for him, and I hope to see it continue.

And of course Michael Wacha's progression from major league "rehab" outings to his old self will be key. His fastball velocity is there, but he needs to be able to throw the changeup to be the pitcher he was at this time last year. As Craig Edwards wrote yesterday, there are a lot of questions about the pitch until we see it. Perhaps Sunday will provide some answers.

A Rockies Q&A with Bryan Kilpatrick of Purple Row

We know about Jorge De La Rosa, but what can you tell us about Franklin Morales and Jordan Lyles? I remember the former as a reliever and the latter as a terrible Astro, though he doesn't look terrible now. What should we expect?

Morales still should be a reliever, but the Rockies' rotation has been such an injury-riddled dumpster fire that he's ended up logging the second-most innings of any of the team's 16 starters this year. Against even fairly decent lineups, Morales does not have a very good chance of winning. If he had the few extra innings he'd need to qualify, he'd have the worst home run rate in the National League. Personally, I think he has some sort of hex on the rest of the Rockies' pitchers; any time he's about to get demoted to the bullpen, someone else gets hurt and winds up on the disabled list.

Speaking of getting hurt, Lyles was pretty good until he suffered a broken hand on a weird play at the plate against the Diamondbacks in early June. He's still been quite serviceable, particularly if the Rockies had him in the role they had planned at the beginning of the season, which is No. 5 starter. He's a wholly league-average pitcher who has shown flashes of being even a little bit better than that when he's not having issues with walks, like when he allowed 30 in 48.1 innings between May 10 and Aug. 28.

What are your thoughts on the De La Rosa extension?

That all depends on what the Rockies plan to do going forward. If De La Rosa and his $12.5 million per year are supplemented with at least one other good rotation option, I love the deal. He's one of the best pitchers in franchise history and has somehow figured out how to completely master Coors Field. But, I have a bad feeling that the Rockies view him as not just a de facto ace, but an actual real No. 1. He is not that, and as such, this could be a problem, particularly because it would mean that the Rockies are counting on the health of injury-prone pitchers Jhoulys Chacin and Tyler Chatwood in future seasons. Counting on health hasn't been a good recipe for success for them.

I really don't believe so. The Rockies had their doubts about him coming into the season, and that is evident both in conversations with people around the team as well as the front office's contract offers to Brian McCann and Carlos Ruiz last offseason. Any strides Rosario might have made this year have been undone by the disappearance of his bat and the deterioration of his health. Not only will Rosario not stick behind the plate -- he is more than likely a non-tender candidate at this point, so he could be playing out his final month in a Rockies uniform.

I look at your depth chart and see Arenado, Tulo, Rosario, Dickerson, Gonzalez and think that's a damn good offensive core. Is it just pitching holding the team back?

Pitching and health. Troy Tulowitzki simply can't be counted on to remain healthy for more than 120 or so games in any given season, and Carlos Gonzalez seems headed that same direction as well. Nolan Arenado and Corey Dickerson are both establishing themselves as All-Star caliber players, but even if they stay healthy and wind up producing at similar levels as Tulo and CarGo, it won't mean a thing if the Rockies don't execute an aggressive pitching plan. They've had some success with reclamation projects, but reclamation projects won't win with this roster.

Are there any promising recent call-ups we should be watching?

Kyle Parker has not received much playing time, but he is the Rockies' highest-ranked prospect to receive an expanded-roster promotion. Parker is a decent outfielder who can also play first base and has some good raw power, but he didn't hit many home runs in Triple-A this year despite playing in big-time offensive environments, and that tells me he hasn't quite adjusted to higher-caliber pitching. Parker, who will be 25 at season's end, isn't a young prospect by any means, and it actually appears that he's falling out of favor a bit due in part to the real or imagined (depending on who you ask) emergence of 26-year-old first baseman and fellow September call-up Ben Paulsen.

There are few people who actually believe that Paulsen is a better prospect than Parker, so I'm hoping the Rockies start giving Parker a shot to show what he can do as he enters a very pivotal season in his young career.

What do you expect to see this off-season? Will Tulo be traded?

Unfortunately, I expect that the Rockies will retain Michael Cuddyer even though it will be horribly cost-ineffective given the team's other options in the outfield and at first base, and one of the domino effects from that will probably be a trade of one of the team's two stars. I personally don't expect it to be Tulo, but CarGo on the other hand? That seems like a pretty distinct possibility despite the fact he'll be coming off the worst and most injury-filled season of his career. Charlie Blackmon, Drew Stubbs, Justin Morneau and Josh Rutledge are also candidates to be traded, and it would greatly behoove the Rockies to explore deals for those players. The odds of it happening, though, are unlikely, given the team's insane loyalty to most of its players (except for those who gain the reputation -- deserved or otherwise -- of not being "gamers").

It will also be interesting to see what the team decides to do with Brett Anderson, who has a $12 million club option. Anderson pitched very well this season when he was healthy, but that's the thing with him: he's never healthy. It wouldn't be wise to pick up that option from a financial standpoint, but the Rockies could renegotiate a smaller deal and take a chance on Anderson bouncing back. If he does, it would definitely make the De La Rosa extension less of a problem, but much like Chacin and Chatwood, Anderson should not be counted on to be healthy.

Is there any sort of clear plan going forward to get the Rockies back into contention? What is it? Or if not, what should it be?

I think there are signs of a plan emerging, and they heavily involve at least two of top pitching prospects Jon Gray, Eddie Butler and Tyler Anderson becoming good major league pitchers. That could happen next year, or it could happen a few years from now, but either way it looks like there is enough talent in the organization to where the major league team could be a good one whenever those pitching breakthroughs take place. Whatever happens, the Rockies need a catcher in a bad way, and it would benefit them to make a run at Russell Martin, even if it means overpaying a bit. They need someone who knows what they're doing behind the plate and can properly handle a pitching staff that will probably already be at a disadvantage.

The Rockies also need to address their bullpen situation. The whole unit aside from LaTroy Hawkins, Adam Ottavino and sometimes Tommy Kahnle, has been absolutely atrocious this season and has cost the team a large number of games. Bullpens in theory should be the easiest part of a team to fix, and the Rockies have actually fared very well in this area prior to 2014, so I have confidence that they can turn it around. Or, at least, I hope so, because there are a ton of other holes to fill without worrying too much about an area that is, by nature, very volatile anyway.

We thanks Bryan for his time! You can find him on twitter @purplerowBK and you can find my answers to his questions here.