Share All sharing options for: Cardinals at Reds Recap: Lynn flinches first in duel to the death, Cards lose 1-0

With the loss yesterday coupled with a Pirates win, the Cardinals' magic number stays at fourteen. Looking to lower that number today is the incomparable Lance Lynn. Challenging him today is Reds ace, Johnny Cueto. Cueto is having a great year and his defeat will be no easy task, but if the Cardinals want to earn a split before starting their upcoming home stand, it is a task they must complete.

On paper this game looked like a pitchers' duel. This is what everyone expected. At first, it appeared that all of us were to be disappointed in that regard. Cueto looked to be fighting his control, Lynn gave up some hits. The first three innings of the game produced six base runners. And then, it happened.

At around high noon, Lynn and Cueto looked each other in the eyes. A tumbleweed rolled in the distance. Cueto gave Lynn a cold, distant stare. Lynn spat at the ground and snarled. These two men didn't like each other. You see, Cueto and his gang are rumored to have rolled through town and and burned buildings and robbed banks. There may have been a brawl in the local tavern. He might have cheated at a hand of poker. Whatever the story was that led to these two men facing one another in the middle of town is irrelevant. But what happened next, now that is the real story.

The two pitchers stood back to back, weapons in hand and began pacing off... three... six... nine... twelve... fifteen... eighteen... twenty-one... twenty four... twenty-six hitters faced between the two and then...

He flinched bad. After sitting down 17 straight batters on his own, he issued the fatal walk to Brandon Phillips. A single and a fly out later, the duel was over. Lynn fell in a pool of his own sweat.

Aroldis Chapman came in to finish the job. Matt Carpenter battled tough for his fallen friend, but was dismissed swinging at an eighty-eight mile per hour slider after fighting through one hundred and one hundred and two mile per hour fastballs. Randal Girchuk put the first pitch in play, but to no avail, Matt the Elder worked a walk, but it was for naught as for the third straight day, Mark Ellis, the pinch hitter, would make the last out of the game.

Why does splitting a four game series feel 83% better than dropping three of four?

LIL SCOOTER'S PAIN IN THE ASS OF THE GAME:

The clear recipient of this award is Johnny Cuteo. His .457 WPA leads all players. He also pitched eight innings of shutout ball, with seven strikeouts and only surrendered three hits, one walk, and hit Jon Jay with a pitch. 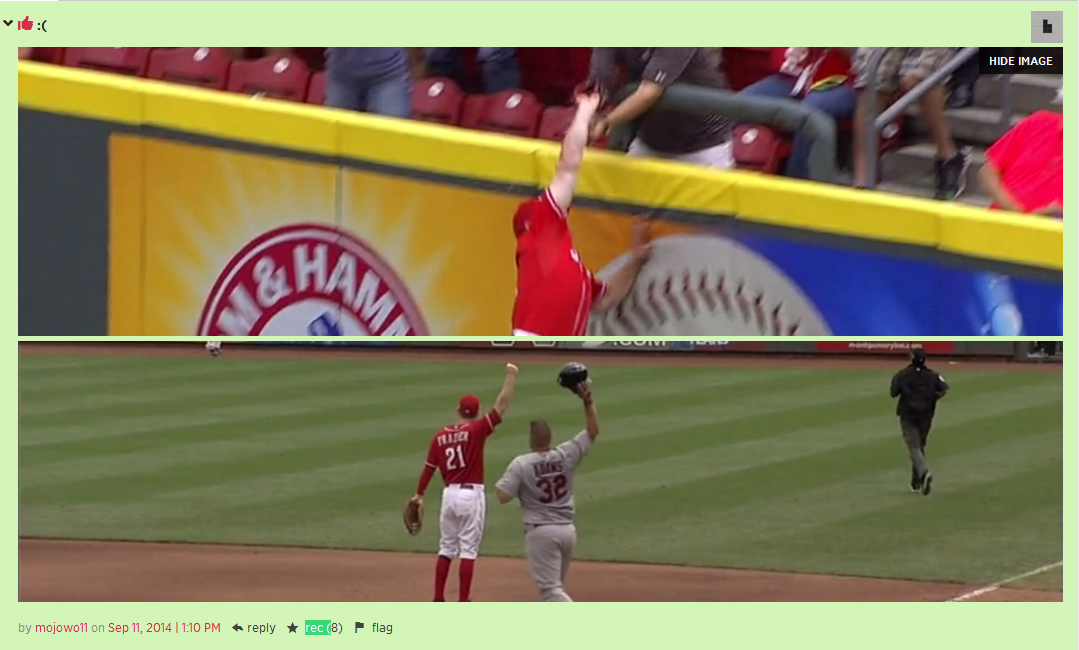 So here is the thing. Sometimes you just run into a tough series. That is exactly what this one was. The good news is that even with the loss, the Cardinals are still three games up on the Pirates. With no games left against the Pirates, the only way for them to catch the Cards is to win more games than they do the rest of the way out. It is very possible, so don't get comfortable, but it will be challenging, so don't panic, either.

The Cardinals return to the safe confines of Busch Stadium where milk, cookies, and the Colorado Rockies await them. Adam Wainwright will look to stop the losing skid against Jorge De La Rosa. Game time is 7:15pm.