Where is Michael Wacha's changeup?

As Michael Wacha fights rust in a September pennant race, he has struggled on the mound. His best pitch, the changeup, has been mostly absent from his arsenal so far.

Share All sharing options for: Where is Michael Wacha's changeup?

The Cardinals and Michael Wacha are conducting an experiment. The hypothesis: if the Cardinals put Michael Wacha through a virtual Spring Training in the middle of a pennant race, they can still make the playoffs and get Wacha ready to repeat his postseason heroics. So far, the Cardinals are starting Wacha and are likely to make the playoffs, but it remains to be seen if Wacha can get himself back to his dominant self. In his start on Tuesday, Wacha struggled with the command of his fastball, got hit hard with his curve, and rarely used the cutter or his signature pitch, the change.

Out of 120 pitches Wacha has made in two starts, he has thrown just seven changeups. he threw five changeups out of 50 pitches in his first outing and threw just two changeups in 70 pitches on Tuesday night against the Reds. The simplest, perhaps most hopeful, solution comes from Wacha. He indicated he elected not to use the changeup because he could not locate his fastball. From Derrick Goold's game story:

It was the fastball that Wacha couldn't harness throughout his four complete innings. It found the middle of the plate or none of the plate, and without the fastball his fierce changeup was "a non-factor," he said. Back from a 2½-month absence because of a stress reaction in his right shoulder, Wacha pitched strongly last week in Milwaukee through three innings. But the Cardinals knew by prepping him for the playoffs in this way, there would be times he wouldn't be at his best, just like any rehabbing pitcher or starter in the middle of spring.

There is some truth to Wacha's fastball command. Below is a chart (again from Brooks Baseball) showing Wacha's pitch location on Tuesday. 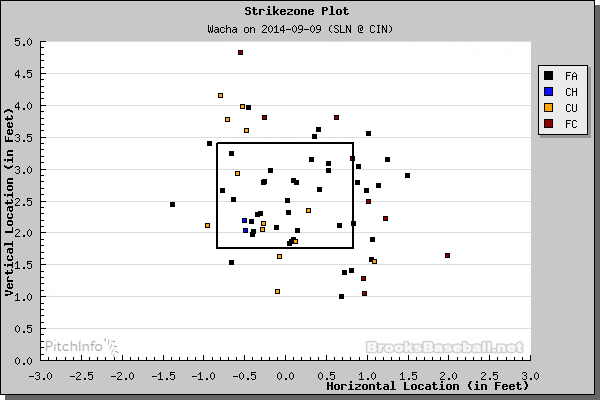 Wacha was not exactly painting the corners, missing his fastball off the plate. The fastballs in the zone do show many that are in the heart of the plate. However, it was not the fastball that led to poor results. Fifteen plate appearances ended with the fastball. Wacha struck out two and walked two. Of the eleven balls put in play, just three landed for hits, two singles and a double. The Reds did their damage on Wacha's curveball.

Wacha threw 14 curveballs against the Reds. Hitters took eight of those curves, six for balls and two for strikes. They swung through two of them and made contact on four. Only one of those four connected swings ended in an out. A double, triple, and home run followed the other three swings. As mentioned above in the Derrick Goold piece, this is somewhat expected as Wacha goes through the rehab process against major league hitters. Wacha has always performed very well in Spring Training, but the hitters he is facing are also going through Spring Training at that time. These hitters have been facing major league quality pitching for five months. A less than sharp curveball and less than desirable results are to be expected and are acceptable at this time.

The question becomes, if Wacha is going through the rehab process and working the kinks out, shouldn't he be working on all of his pitches, including his very successful changeup. In his career, the changeup has been Wacha's most successful pitch. Looking at individual pitch effectiveness comes with some caveats as the success of any pitch is dependent on a pitcher's entire arsenal, but it is hard to deny just how good Wacha's changeup has been. In his career, Wacha has gotten a swing and a miss on nearly 20% of his changeups, roughly twice that of his next best pitch (fourseam fastball). Out of the 203 at bats that ended with a Wacha changeup, 74 have been strikeouts. Hitters have just a .182 batting average with a minuscule .222 slugging percentage against the changeup.

Wacha's injury carries with it very little in the way of precedent. Brandon McCarthy, currently with the Yankees, is the most prominent pitcher to have similar problems to Wacha, but even his situation is not entirely similar. As Aaron Finkel wrote when Wacha was placed on the disabled list,

It seems like Wacha's version, if it is indeed analogous to McCarthy's, was caught far earlier than Brandon's initial battle with it, and hopefully can be managed better as well.

Before Wacha's injury, McCarthy said he represents four of the five documented cases of a scapular stress fracture/reaction and joked that the injury should be named after him (McCarthy Reaction, baseball injury or spy novel?). Given the rarity of the injury, it becomes easy to jump to conclusions when Michael Wacha's drop in changeup use is paired with this quote from Derrick Goold's story at the time of the injury

They are gathering information, Mozeliak said, to consider ways to prevent recurrences such as McCarthy has seen. Determining if there are links between the two lithe, righthanded pitchers is part of the research, including a look at similarities in their mechanics. Bone density, nutrition, and biomechanics are all being audited. It is the same search McCarthy has had to take the recurring element out of a chronic injury.

Brandon McCarthy threw his changeup 10-15% of the time through 2010. After his injury, he revamped his mechanics and stopped using his changeup. When 1) Brandon McCarthy is the test case, 2) the Cardinals look at Brandon McCarthy to help develop a plan for Wacha, 3) McCarthy stopped throwing a changeup, and 4) Wacha has backed off his changeup, it is easy to theorize that Wacha's lack of changeup use is part of an injury prevention plan. The theory does have merit, but there are a few holes.

McCarthy's revamping of his mechanics and a change in pitching philosophy might have had a lot more to do with abandoning his changeup. From this Kyle Boddy piece, here are two Brooks Baseball charts showing McCarthy's release point before and after the injury. 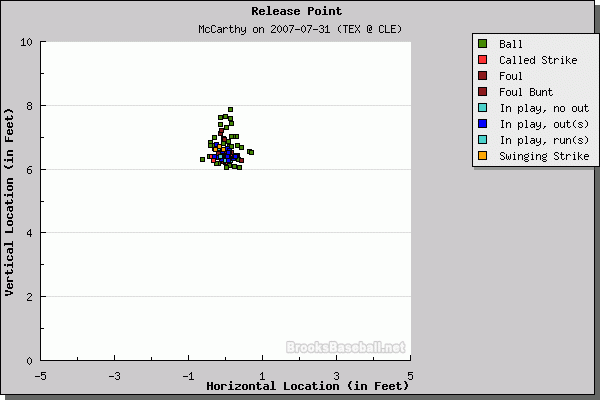 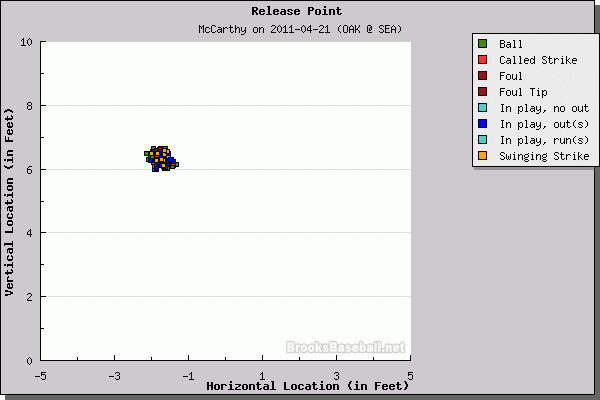 Now compare those with Wacha. 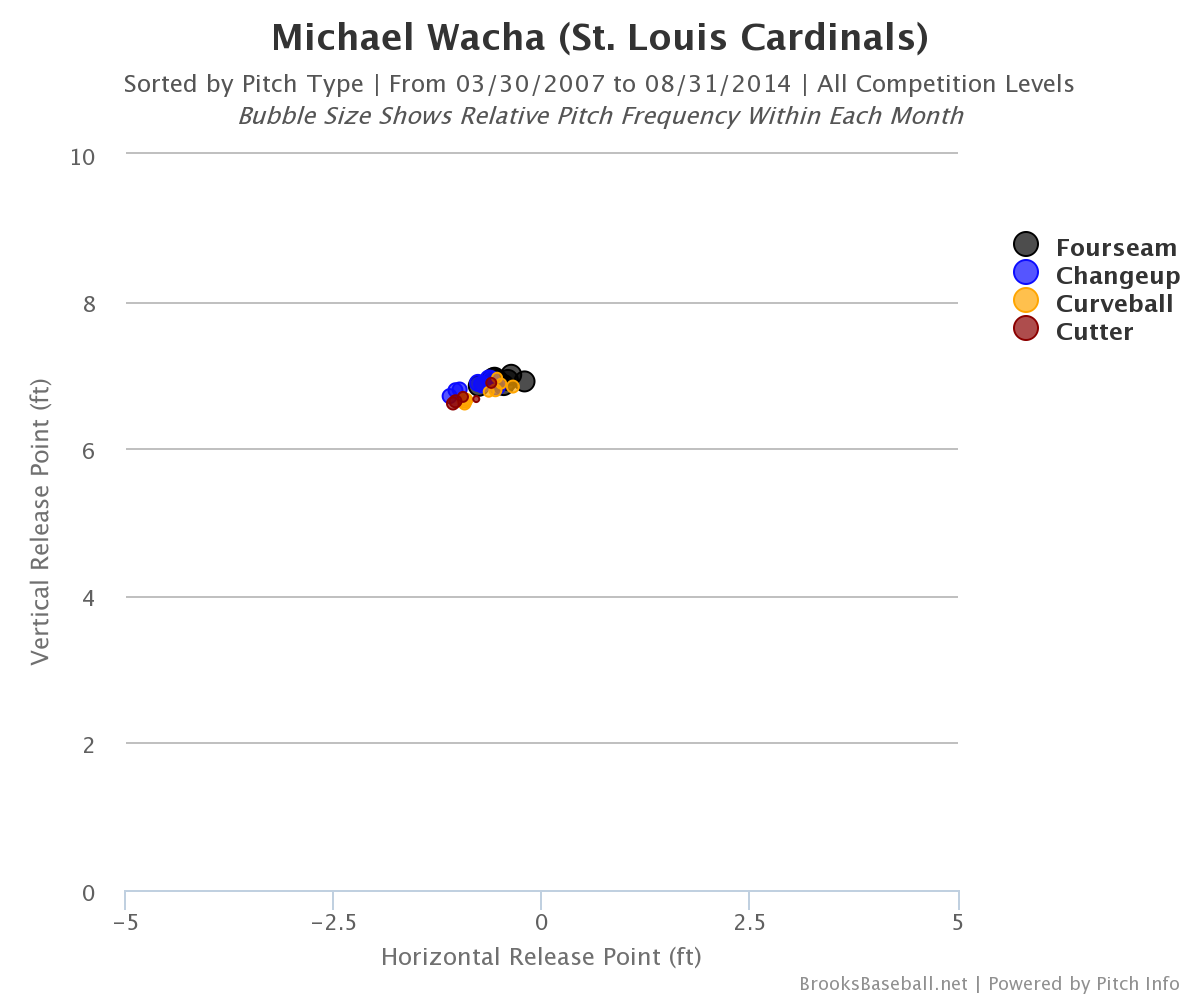 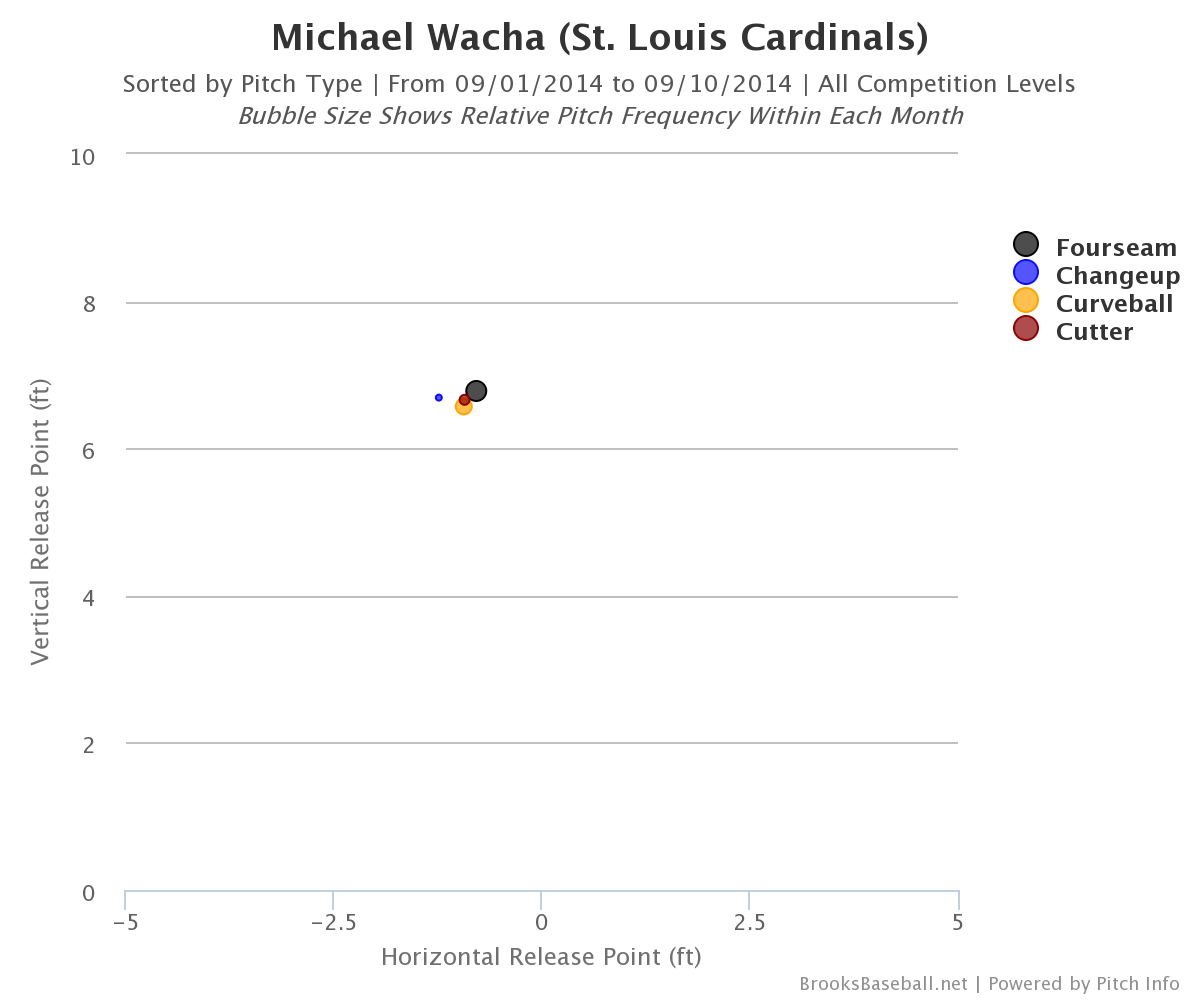 While there are some slight changes, nothing to the degree of McCarthy's changes. McCarthy purposefully changed his pitching philosophy to get more ground balls, resulting in more sinking fastballs and cutters beginning in 2011. In an interview with Eno Sarris last offseason, McCarthy discussed his philosphical change.

Changing from a fly-ball arsenal to one more ground-ball friendly altered everything. "When I changed things over, I tried to work the mental side with it, but I also had way more confidence in the 2-1 count, of, here's the sinker, here's the cutter, swing as hard as you want, I don't care, my goal is for you to hit it, just not well," McCarthy said.

Michael Wacha is not a heavy ground ball pitcher, inducing ground balls at a 43% rate. When throwing a sinking fastball and a cutter, a changeup might be somewhat duplicative and unnecessary. Wacha's fastball is still the fourseamer with velocity McCarthy cannot reach. In the interview with Sarris, McCarthy discussed his difficulty with the changeup, and how it lacked consistency. McCarthy also discussed the mental aspect of throwing a change.

Some of this anxiety is inherent to the changeup, maybe. "I feel like it's the most mental pitch of any pitch you throw," said McCarthy, "It's the one pitch you truly have to trust the grip. ... You're taking velocity off your fastball, which is scary: if it misses, it's probably going to get clobbered." He agreed that organizations that develop good pitching stress the pitch and have all sorts of ways to "force guys over the hump" by encouraging changeup usage. "But you can give me any grip, and if it doesn't feel right, and I don't trust it, you can make me throw it 70 times and all 70 times are going to suck," he said.

McCarthy's change is a slower one, sometimes misclassified as a curve, unlike Wacha's faster changeup. There very well could be a mental block about throwing it now, but it provides some encouragement going forward as Wacha has had tremendous success with the pitch and should develop confidence as he continues to build up for the postseason. McCarthy, for one, is not concerned.

While McCarthy has struggled some over the past few years, his career is a sign of encouragement for those like Wacha who have been diagnosed with a McCarthy Reaction. Three years ago, McCarthy realistically worried that he would never be able to pitch beyond 140-160 innings in a season. He has pitched over 180 innings so far this season, and has had a resurgence since throwing more cutters with the Yankees.

Despite Tuesday's poor outing, the Cardinals' experiment is going well. Wacha's velocity is back up and it is reasonable to expect his fastball command to improve with more outings. If, when the fastball command comes back, Wacha is still not throwing his signature change, questions will be raised regarding the Cardinals' decision to put him in a pennant race at less than his best.

It is fair to question whether Wacha would be better off resting the rest of the season and figuring out what kind of pitcher he can be in the offseason. However, with the amount of rest Wacha was given, the deep bullpen, and the slightly comfortable lead in the division, giving Wacha the opportunity to right himself in September has the chance to pay huge dividends in October. Wacha has made just 154 competitive pitches between the minors and the majors since coming back. We are still in the experimentation phase. Let's wait a bit before we reach a conclusion.