Dusak pulled off the rare trick of playing in the majors as both a pitcher and position player. Even more rare, he did both within the same season.

While investigating my last post on Cardinals position players who pitched, I stumbled onto an interesting anomaly. Like Rick Ankiel, he transitioned between hitting and pitching in his major league career, but like Babe Ruth and only a few others in history, he even pitched and played as a position player within the same season. That player was Erv "Four Sack" Dusak. 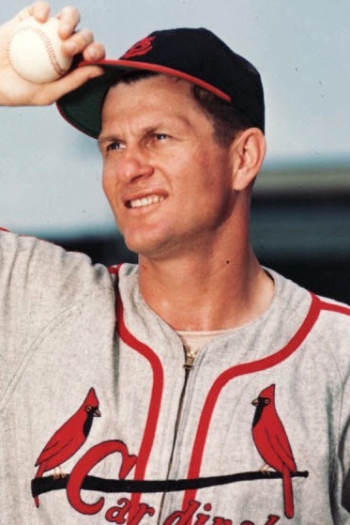 Erv Dusak came through the minors along with fellow outfielder Stan Musial. Both were signed in 1938 and both made their major league debut as September call-ups in 1941. Dusak made a handful of appearances in 1942 before enlisting in the military.

When he returned to the majors in 1946, he did so as something of a utility player. He made more than 300 plate appearances in each of the next three seasons, mostly shifting around the outfield, but also occasionally playing third, second and even once at shortstop.

Dusak was always a fringe-type player, his WAR topping out at 1.7 and dancing around zero most of his career. His batting average as a Cardinal never impressed, but he had a little pop and he could take a walk - enough so to put up a .378 OBP in his best season, 1947.

The few biographical mentions of Dusak online say his hitting abilities declined around 1948. While there was a bit of a dip in his numbers, the bigger issue might have been that Stan Musial, who had primarily played first base following his return from the war, was then back in the outfield regularly. With Musial and Enos Slaughter as fixtures in two of the outfield slots, there was less room for a guy like Dusak.

But a funny thing happened in the last inning of the last game of 1948: Erv Dusak came in to pitch. Trailing the Cubs 4-3, Dusak issued one walk but got out of the inning without giving up a run.

In 1949, Dusak got into one April game as a pinch-runner before returning to the minors. There, he worked to pull off the reverse-Ankiel and make himself a pitcher. By May 6 of the next year, Dusak was back up with the Cardinals as a relief pitcher.

Dusak made 14 appearances and racked up 36 1/3 innings in 1950. He often came in in the 7th, 8th or 9th inning and finished the game. He was a closer before there was such a thing, except Dusak most often came into games which were already out of reach. But he pitched well enough to earn two starts in September. While Dusak was primarily a pitcher, he was occasionally still tapped for his other skills. He was often used as a pinch runner, and even stuck around a few games playing Center Field.

As a pitcher, Dusak was just as fringy as he was as a position player. His K/9 was actually a tick above league average, but his BB/9 was significantly worse. His 4.37 ERA as a Cardinal nearly matches his 4.38 FIP.

Dusak was back on the mound to start the 1951 season, with his K/9 reaching an impressive 7.2 during the first month of the season. He also homered in one of his two at-bats as a pinch hitter. But on May 17, he was traded to the Pirates, acquired by the new Pirates GM, Branch Rickey. Did Rickey see Dusak as a pitcher or a utility player? It's hard to know. But after three disastrous pitching appearances for the Pirates, Dusak was moved back into the outfield.

Surely clinging to his baseball life, Dusak responded by putting up some of the best numbers of his career. Playing all three outfield positions and occasionally second or third, Dusak put up a slash line of .308 / .357 / .462 for the Pirates in 1951. But he could not repeat that performance in 1952, and by mid-season he was released by the Pirates and out of baseball for good.

By most measures, Erv Dusak had a mediocre major league career. Both as a hitter and a pitcher, few of his skills ever reached above league average. To transition between the two roles puts him on a very short list in the history of baseball. But to log significant time as both a pitcher and a position player in the same season, as Dusak did in 1950 and especially 1951, that was something that virtually nobody had done since the era of Babe Ruth and George Sisler, and nobody has done since.