Yadier Molina: Capitalizing on his extensive knowledge of the strike zone, his reputation?

Does Yadi's extensive knowledge of the strike zone have an impact on his performance as well as influence pitch calling by umpires?

Share All sharing options for: Yadier Molina: Capitalizing on his extensive knowledge of the strike zone, his reputation?

Since returning from the disabled list, six-time All-Star and six-time Gold Glover Yadier Molina has struggled mightily at the plate for the Cardinals. In 12 starts, he has struck out seven times and has tallied just 10 hits—all of them being singles. His timing is not exactly where he needs it to be (which is understandable given the fact that he missed 40 games), and it is disturbingly apparent that he is expanding his zone much more than we have grown accustomed to over the years. One of the things that helped Molina develop from a "poor" to "below average" hitter early in his career (2004 through 2007) to where he is now is his ability to capitalize on his extensive knowledge of the strike zone—a skill that is inherent in him as one of the best catchers in the game.

Sure, Molina doesn't walk very often (7.1% career walk-rate), but a main reason why is his propensity to swing at the first pitch (17.4% of his career plate appearances have ended on the first pitch). With a career slash line of .316/.322/.461 on the first pitch, one cannot really complain about him taking this approach to the batter's box. To break down Molina's approach even further, roughly 25% of his career plate appearances have ended after just one or two pitches. When Molina is ahead in the count, he is slashing .316/.467/.462. Conversely, when he is behind in the count, his production predictably drops off to .244/.253/.335. Thus, though Molina doesn't walk all that often, it makes statistical sense as to why Molina would benefit from having borderline ball versus strike calls go his way.

After hours of PITCHF/x data collection from Daren Willman's fantastic Baseball Savant website, I was determined to see whether or not Molina's knowledge of the strike zone has influenced the pitch calling of home plate umpires. Were borderline strikes being called balls with him at the plate? What about borderline balls? Were they going his way or were a lot still being called called as strikes?

Starting with the 2008 season, I looked at yearly graphs of every single pitch that was called either a ball or a strike with Molina at the plate. Unfortunately for internal comparative purposes (to the years Molina struggled), 2008 happens to be the season he began to turn it around as a hitter (97 wRC+), but 2008 is as far back as one can reliably go with PITCHF/x data, so this had to do. Fortunately, at that stage in his career, Molina had yet to establish himself as the best defensive catcher in baseball (BDCIBTM ), so there's still a chance that we could see a difference in the way umpires called borderline balls and strikes with Molina at the plate, especially as his Gold Glove awards piled up and as his reputation grew. 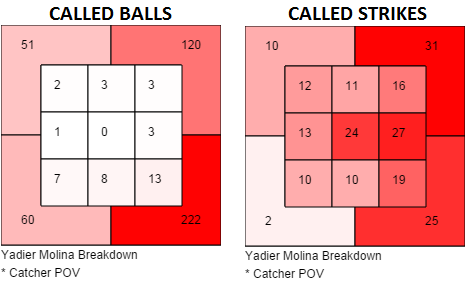 As you can see, 32.4% (68 out of 142) of the called strikes against Molina were out of the strike zone, with outside pitches being the two main culprits. Of the 493 balls called, 40 of them (8.1%) should have actually been called strikes. For the theory being tested, this isn't all that surprising because the "Legend of Yadier Molina" was still in its very beginning stages at this point in his career. Without any data to compare to, no real descriptions can be given other than that 32.4% seems somewhat high. 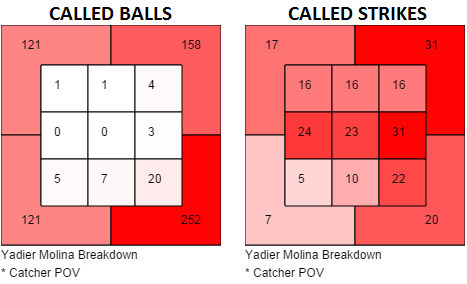 In 2009, 31.5% of the strikes (75 out of 238) called against Molina were out of the strike zone—a statistically insignificant decrease from 2008. On the flip side, of the 693 pitches called balls, 41 of them (5.9%) should have actually been strikes. Despite experiencing more hitting success in 2009, as compared to 2008, it appears that umpires remained steady in how they called borderline pitches with Molina at the plate. 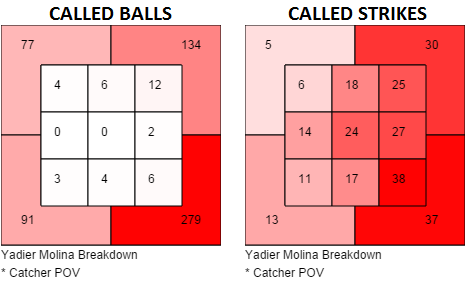 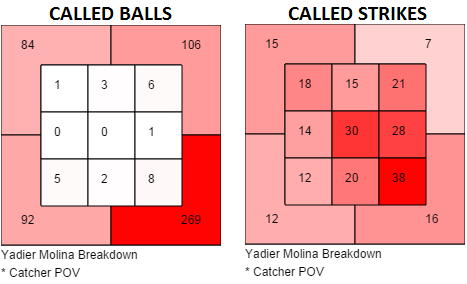 In 2011, which is statistically his third best hitting season in his career thus far (126 wRC+), Molina experienced a pretty significant drop in percentage of strikes called on pitches out of the zone—down to 20.3% (50 out of 246), roughly a 12% decrease from the rates he experienced in 2008, 2009, and 2010. He gained 26 balls on pitches that were actually in the strike zone, with the outside corners being where he benefited most. The ~12% decrease was beneficial to Molina and played at the very least a slight role in his 2011 hitting success. 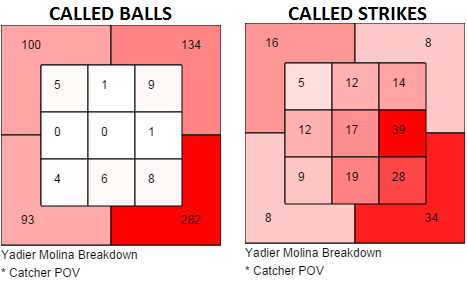 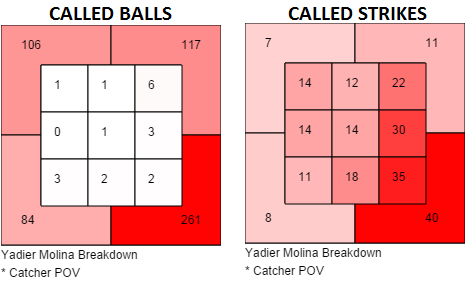 Coming off two great seasons, 28% (66 out of 236) of the strikes called against Molina were out of the strike zone in 2014. He gained only 19 balls in all of 2013, but somehow, one pitch that was right down the middle was called a ball, so I figured that was worth noting (likely a pitch framing issue by the opposing catcher). Molina captured the Silver Slugger for his hitting performance in 2013, and his statistics benefited from his slash lines on the first pitch (.347/.340/.505) and while ahead in the count (.364/.470/.563). 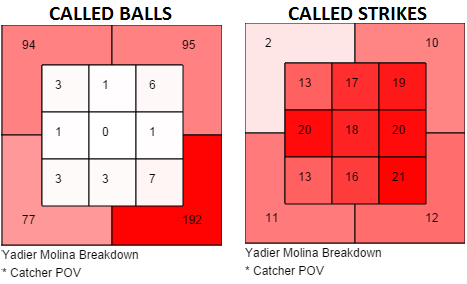 So far this season, 18.2% (35 out of 192) of the strikes called against Molina have been out of the strike zone. This is the lowest percentage yet, and subsequently the biggest benefit to Molina as a hitter. This number makes sense because the "Legend of Yadier Molina" is in full effect at this point in his career—given the fact that he won his sixth-straight Gold Glove last season and was in the running for National League MVP.To go along with a decreased rate of called strikes that were actually balls, Molina has gained 25 balls on pitches that were actually strikes. Yet, from a hitting perspective, 2014 has been a disappointment for Molina, despite getting better calls on borderline pitches. Sure, some of the blame can be pointed toward his issues since returning from the disabled list, but what's the explanation for him having a less-than-stellar May (.266/.330/.351) and a downright poor June (.210/.278/.309)?

Well, the year-by-year breakdown is nice and all, but without comparators, the information provided doesn't really mean all that much and is not nearly enough to draw conclusions. Thus, the graph below has the totals from the seven seasons of data that is publicly available on Baseball Savant: 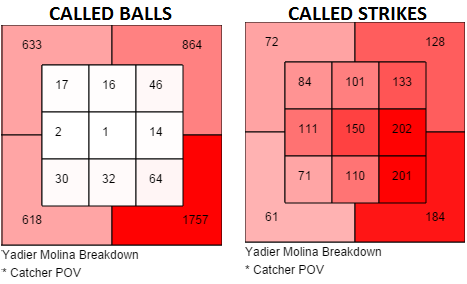 During this span (3,555 PAs), 27.6% of the strikes called against Molina were out of the strike zone. He gained 222 balls on pitches that were actually in the strike zone. So, how does Molina stack up against right-handed hitters deemed as having a "good batter's eye" by some of my Twitter followers?

Note: The skill of having a "good batter's eye" means not only that the hitter has a good eye for the strike zone (duh), but also that there's a likelihood that this impacts the umpires' pitch calling (ball versus strike, especially on borderline pitches). 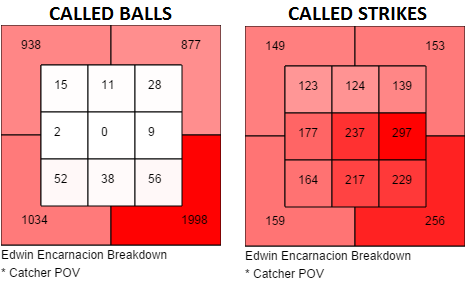 Difference in PAs versus Molina: negative 9 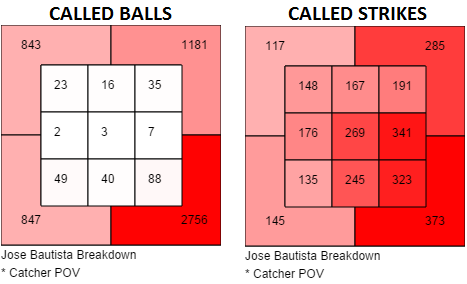 Difference in PAs versus Molina: positive 136 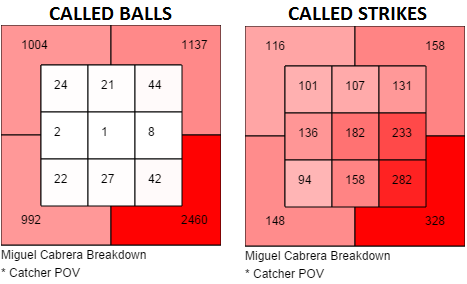 Difference in PAs versus Molina: positive 1,109 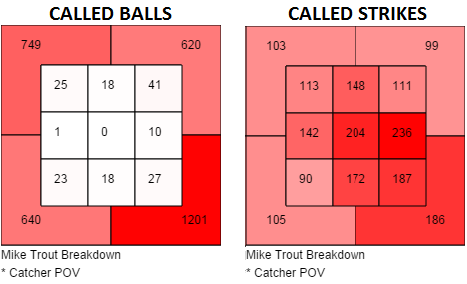 Difference in PAs versus Molina: negative 1,430 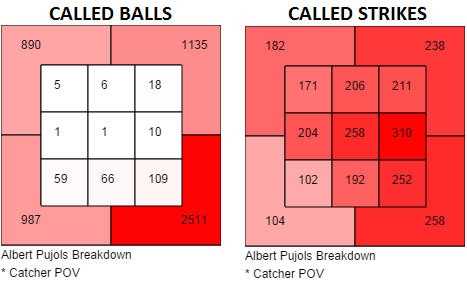 Difference in PAs versus Molina: positive 875

Let's sprinkle in a switch-hitter... 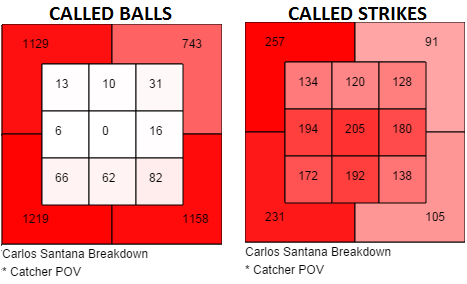 Difference in PAs versus Molina: negative 875

And finally, a left-handed hitter for completeness... 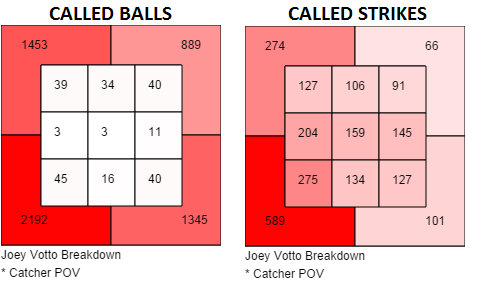 Difference in PAs versus Molina: positive 418

Proportional to plate appearances, of the seven comparators looked at, Molina gained more balls during the given time frame than four of the seven hitters. Bautista, Trout, and Santana were the three that gained more balls than Molina. When looking at percentage of called strikes on pitches out of the strike zone, Molina's 27.6% was the second lowest, behind Trout's 26%. Considering Trout is on another planet in terms of baseball performance, this is not much of a surprise. Thus, as you can hopefully see from the data provided, Molina's extensive knowledge of the strike zone puts him in a better position than most of even the best batters' eyes in the MLB.

Special thanks to Daren Willman for answering a few of my questions along the way and for creating such a wonderful website in Baseball Savant.