Hold on to your butts! A September and Pirates preview and Q&A.

Oh, it's a long, long time / from May to December / But the days grow short / when you reach September

Share All sharing options for: Hold on to your butts! A September and Pirates preview and Q&A.

It's September 1, and the Cardinals, the frustratingly mediocre, underachievingly overachieving, too young, too old, beat to hell Cardinals are tied with the Brewers for first place. Pete Kozma helped them get there. I don't know anything. However, I can take a good guess that this September is going to be unpredictable and highly entertaining. Here are some questions:

Is Waino's dead arm ready for some sort of zombie pitching?

Will Wacha be able to provide meaningful innings?

Is Pete Kozma's magic container refilled after he refrained from using the stuff for the last 22 months?

How is Kolten Wong feeling?

How is Matt Adams feeling?

Should we be more worried about the Brewers or the Pirates?

Here are the current standings: 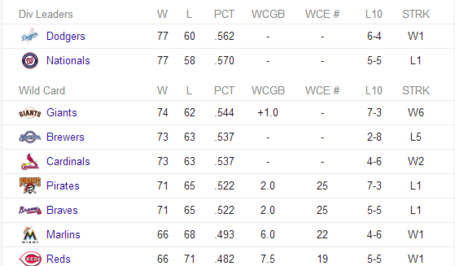 If the Cards, Pirates, or Brewers can play an inspired month, they'll win the division. But given how the year has gone so far, it seems more likely the race will be decided by one team winning 15 games this month while the others win 13.

Charlie Wilmoth, site manager and founder of Bucs Dugout was kind enough to answer a few questions I asked him about the Pirates. We thank him for his time!
1. Are you at all worried about Gregory Polanco's struggles? How do you view his future?

No. He's a rookie, and he still has the same ridiculous tools and minor league pedigree he had when he started. His control of the strike zone makes him a very safe bet, as prospects go. He's still likely to become a star.

2. What has been the difference for Francisco Liriano between his first half struggles and his much improved recent performance?

His stuff and command have been sharper, leading to fewer walks. His changeup has been terrific recently. Liriano was also the victim of some bad luck in the first half, with an xFIP much better than his ERA -- he's been better in the second half, but maybe not that much better.

3. Are there long-term concerns about Gerrit Cole's health or was this just a temporary thing?

I've never heard anyone suggest Cole's injuries this season are likely to be ongoing.

4. Is Josh Harrison's performance this season what you expect to see going forward? Is he the starter at third long-term?

His current performance is clearly partially fluky. There's nothing in his previous record that indicates he can continue at his current pace, which has fans at PNC Park doing MVP chants. I'm reminded a little of Bill Hall, another super-utility player who had an out-of-nowhere breakout season in 2005, followed by a superstar-caliber year in 2006. His peak was brief. That said, unlike Hall, Harrison posted good hitting numbers in the minors, and his recent high-caliber defense at third base gives him a bit of a floor if/when his offense tails off. And yes, Harrison will likely remain the Bucs' third baseman -- Pedro Alvarez has had serious issues with his throwing and will likely replace Ike Davis next season as the left-handed half of the Pirates' first base platoon.

5. Are there any hard decisions facing the Pirates this off-season? Do you expect any big moves?

There are lots of decisions that should be difficult, with Russell Martin and Liriano eligible for free agency. Of course, I made the mistake last offseason of thinking that the Pirates' first winning season in 20 years would lead them to actually spend a bit in the offseason, and instead they spent it sitting on their wallets. So it wouldn't surprise me if they just let Martin and Liriano go, made a couple relatively minor signings, and hoped for the best, especially since the free agent class isn't robust to begin with.

6. Are you as terrified of the Cubs as I am? I wake up in a cold sweat nightly.

Yes, their offense is going to give us all fits. If there's anything that's comforting about Gregory Polanco's struggles, though, or Oscar Taveras', it's that even some of the best prospects struggle at first. The Cubs are going to be terrific once they get going, but that might take a couple years.