Carlos Martinez and his future with the Cardinals

Carlos Martinez moved from bullpen to rotation to bullpen to Memphis all in a matter of months. While his services are not currently necessary in St. Louis, El Gallo is still playing a very important role for the Cardinals and could be called upon before the year is through.

Share All sharing options for: Carlos Martinez and his future with the Cardinals

Carlos Martinez entered spring as a rotation candidate, moved to the bullpen as a setup man, then middle reliever, and most recently started for the Cardinals after Michael Wacha and Jaime Garcia went down with injuries when the Cardinals needed arms in the rotation. The Cardinals initially chose Martinez over Shelby Miller following the All-Star break as the fourth starter when off-days removed the need for a fifth starter. After just one second-half start, Martinez found himself demoted to the bullpen for Miller, who returned as the fourth starter. El Gallo then received another demotion, to Triple-A after trades for Justin Masterson and John Lackey moved Martinez further away from starting. Martinez's current status with the Cardinals is murky, but he likely fits into the Cardinals' plans in 2014 and the future.

Martinez was given an opportunity to start, and as I noted a few starts in, the pressure was on. While Martinez ultimately lost his spot in the rotation and had a few tough starts to end his time in the rotation, his time there was likely a very good experience. Martinez pitched fairly well as a starter. He made seven starts with the following line:

There is a mix of good and bad in that line. The ground ball percentage, strikeouts, FIP, and xFIP are all positive indicators for Martinez's time as a starter. The ERA and walks were not very good. The ERA was highly influenced by a very high BABIP which can be chalked up mostly to bad luck, but walking as many hitters as he did will make his ERA vulnerable to a spike when he has some bad BABIP luck. Of course, Martinez's first start was more of the emergency variety. He moved immediately from the bullpen to the rotation and no chance to build up stamina and innings necessary for the rotation.

The ERA is still ugly, but his FIP and xFIP indicate he pitched rather well (The ERAs of the four starters this season with a FIP between 3.40 and 3.50 are 2.94, 3.64, 4.09, 2.92.). The walks are down a little bit, and he is still striking out more than a batter an inning. The .402 BABIP indicates that Martinez is either not a professional-level pitcher or he was really unlucky. His very good groundball rate, his strikeout rate, and the eye test all confirm the latter.

Aside from the walks and some very poor luck, the biggest problem Martinez faced in the rotation was innings. His first start could be excused as he was in the middle of an on-the-job transition to starter, but out of his last six starts he lasted five innings just three times and only once pitched six innings. Those numbers are concerning and likely contributed to the trades of John Lackey and Justin Masterson, but a closer look at the starts show that Martinez was handled carefully by Matheny. Martinez never made more than 90 pitches in a start and in three of his final six starts, he did not top 80 pitches.

Matheny handled Martinez like Tony LaRussa handled pitchers in the 2011 playoffs. There is nothing wrong with Matheny's approach given the quick transition from the bullpen, but putting the blame solely on Martinez for failing to pitch later into games is not entirely fair. In his second start, Martinez completed three scoreless frames in a row and was pulled after just 74 pitches. Against the Dodgers, Martinez breezed through the third and fourth innings, and was pulled at the first sign of trouble in the fifth after just 82 pitches. Martinez was in trouble against the Giants in the fifth inning. However, he struck out Buster Posey to end a scoreless fifth and with his spot due up the next inning, he was taken out after 88 pitches. He went six innings against the Pirates. Against the Brewers, Martinez struggled and given it was the day before the All-Star Break, there was no sense in pushing him after just 69 pitches.

Martinez was given just one start after the All-Star break against the Dodgers. Martinez was not at his best after the layoff, walking two in four innings, but he did manage to make it out of the fourth without any runs in that inning. He was pulled after just 74 pitches. Martinez could have made the decision for Matheny tougher, but Martinez also did not receive the same leeway in pitching deeper into games that most starters are given. Just because Martinez did not pitch deeper into games does not mean he cannot pitch deeper into games. As seen by the chart below from Brooks Baseball, Martinez did lose a bit of velocity on his fastball in the fourth inning, but in his last two starts that he made it into the fifth inning, some of the velocity returned. 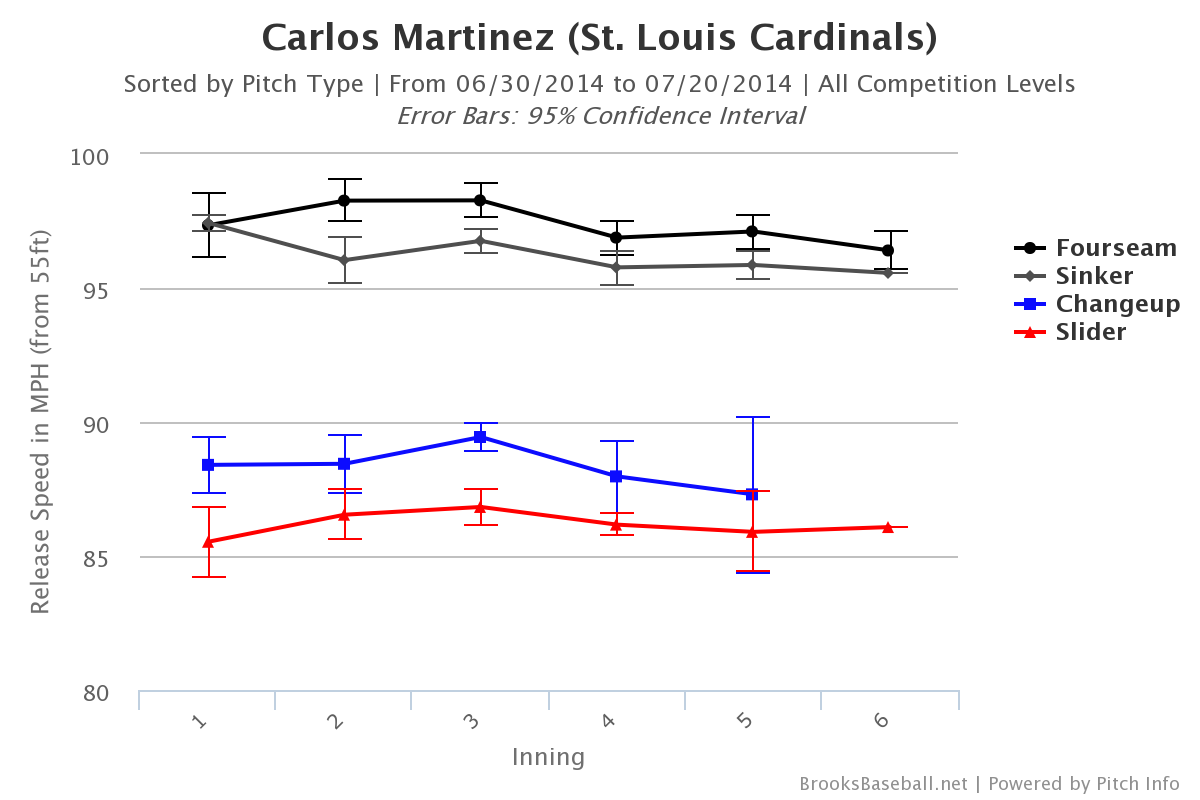 Pitching at 97 miles per hour in the fifth inning, essentially the same velocity as the first, is good enough to get even the best major league hitters out. Given more opportunities to start and pitch deeper into games, Martinez  could show the strength and stamina necessary to be a very good starter long-term. At the major league level, there are currently no openings for him.

The Cardinals decided to send Martinez down to Memphis as opposed to putting him back in the bullpen. While technically a demotion, the trade deadline activity and reassignment are good indicators of how the Cardinals view Martinez. First, the Cardinals refused to trade him. We do not know how far the Cardinals went in talks with other teams, but choosing to keep Martinez as opposed to trading him for an ace shows, to some degree, the Cardinals faith in him. Choosing to have Martinez start in Memphis shows the role the Cardinals believe to be his best long-term. The Cardinals still believe he can be a starter, and the potential is still that of an ace.

In his first start in Memphis, Martinez pitched very well. Apparently on a pitch count, Martinez went 4 1/3 innings, giving up just three hits and a walk to go with four strikeouts. He made just 58 pitches with 42 of those going for strikes. As Derrick Goold noted after the game.

Martinez will continue building stamina until recalled to the majors in September, if not earlier.

Martinez is currently down in Memphis as the potential sixth starter for the Cardinals. Justin Masterson is coming off an injury and yet to pitch well this season. John Lackey is 35 years old. Shelby Miller has been inconsistent, and there are questions surrounding Adam Wainwright's health. Lance Lynn has been a workhorse, but injuries happen and putting Martinez in Memphis puts him in much better position to help the team over the final two months should a need arise. With his last minor league start Martinez is still under 73 innings on the season. His innings have been managed to a point where he could be a starter deep into the playoffs should that need arise.

The most likely scenario for this season has Martinez, still just 22 years old, continuing to develop in Triple-A in case the Cardinals need another starter. He will probably return to the bullpen at the end of the season and potentially the playoffs where he can play the same role he was so successful in last season. In the offseason, he will once again condition himself as a starter. Absent a trade, he will be fighting to get into a rotation featuring Adam Wainwright, John Lackey, Michael Wacha, Lance Lynn, and Shelby Miller. Given Miller's inconsistency and Martinez yet to establish himself as a starter, the Cardinals might be wise to see if they can lock up either or both players to extensions and secure their futures in St. Louis.

Despite finding himself in Triple-A after finally making the rotation a month ago, Martinez still has an extremely bright future. He has a tantalizing arsenal of pitches that can get hitters out in any inning. He is likely to contribute to the Cardinals stretch run this season and hopefully become a mainstay in St. Louis for years to come.