Lynn pitches well again, and the offense produces ten hits--including some clutch ones.

Share All sharing options for: Cardinals vs Red Sox Recap: Lynn, Cards win an exciting one, 3-2

Tonight's game was fantastic. Here is a non-exhaustive list of things that cumulatively made it fantastic:

And the Cardinals beat the Red Sox, 3-2.

It is well documented that Lance Lynn has a large and nettlesome platoon split, pitching like a Cy Young winner against righties and like a batting-practice pitcher versus lefties. Coming into the season, many of us wondered if this would be the year that Lynn figured out how to close that gap. So far this year, he has--at least a little bit.

In 74 innings pitched this year (not including his seven innings tonight), Lynn's most glaringly platoony stat is his BB%: 12.6 vs LHH, 6.2 vs RHH. And while I think that his walk rate versus lefties is slightly inflated by his pitching around lefties to get to right-handed hitters--avoiding dangerous hitters is also something Wainwright does, though of course less often than Lynn seems to--even in spite of that large and still nettlesome walk-rate split, it looks like he has indeed improved versus lefties this season: His wOBA-against the past three seasons is .366, .340, and .310 this year. And that's not all luck on balls in play, either, as his xFIP has gone from 5.09, to 4.74, to 4.59 this year.

Unfortunately, and on the other hand here, his peripherals versus righties are not as stellar this year as last: 3.17 xFIP versus 2.88 last year. Welp, nobody's perfect.

But how well did Lynn pitch tonight, you might ask? Very well. 7.0 IP, 4 H, 1 ER, 1 BB, 4 K, and lots of ground balls (61.9%). Again, the only runs that scored on him were the result of a Carpenter throwing error and an error by Lynn himself, when he induced Will Middlebrooks to hit a bases-loaded inning-ending double-play ball right back to the pitcher's mound, only to bobble and fumble it and settle for one out at first base. He then struck out Mike Napoli to end the inning.

And how well did Lynn pitch against lefties? Very well, though this wasn't a lefty-heavy lineup, either in number or quality. Lynn particularly bedeviled Boston's leadoff hitter Brock Holt, who grounded out to start the game and struck out versus Lynn twice (and Neshek once) thereafter. Here's Lynn's fastball to strike out Holt and end the third: 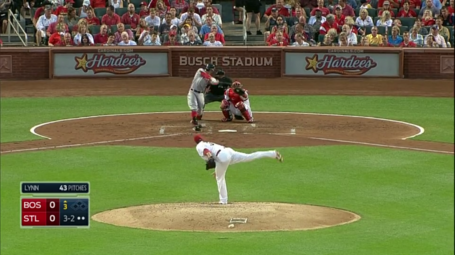 If you don't have a great changeup, a good way to get lefties out is to throw pitches like this: hard fastball, belt high, outside. Hard to hit but also hard to lay off. More of that, Lance.

After Yoenis Cespedes hit a groundball single to start the seventh, Daniel Nava lined a hit to left and Xander Bogaerts sacrifice bunted, bringing Christian Vazquez to the plate with one out and men on second and third and the game tied 1-1.

Christian Vazquez is A.J. Pierzynski's replacement and has a stellar defensive reputation (see below) but is a poor hitter and does that poor hitting righthanded. Matheny chose to walk him anyway, to load the bases for the equally righthanded Will Middlebrooks.

The strategy paid off (Lynn induced a weak grounder back to the mound) and also didn't (Lynn muffed it, allowing the go-ahead run to score). Mike Napoli then pinch hit, striking out on a close strike three. He was plussed about the call, was Napoli--plussed and angry.

In the bottom of the seventh, the Cardinals would fight back into a tie because of Shane Robinson's walk, Kolten Wong's single to center, and this incredible slide: 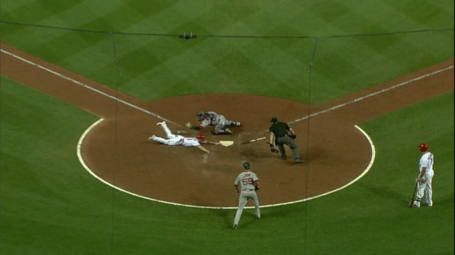 I'll learn how to make gifs one day and you'll see just how perfectly he executed this slide. Until then, however, just look at this still, and do in no wise neglect to admire Matt Holliday's herculean sangfroid there, watching the most exciting play of the game take place right in front of him, cool as a cucumber. Nothing rattles this guy.

Ah, except maybe the elite pitch-framing skills (nay, call them strike-stealing skills) of Christian Vazquez, who basically struck Holliday out all by himself. Witness: 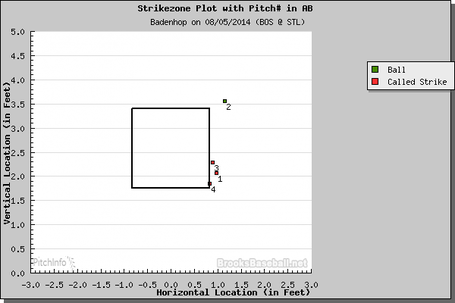 and the last pitch: 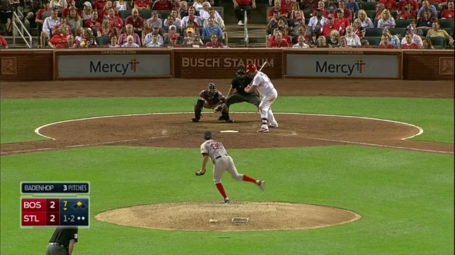 Trevor Rosenthal pitched a scoreless ninth inning, because he had luck and Peter Bourjos on his side. 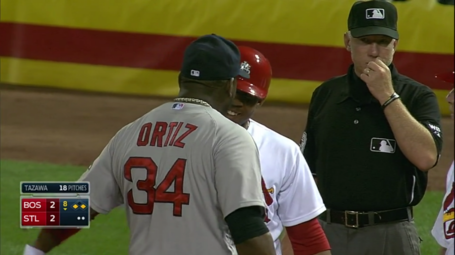 Game two of the series takes place at 7:15 central Wednesday night, Shelby Miller versus Joe Kelly, in a rematch of hundreds of foosball games they've played through the years. Word on the street is that the first one to get a hit off the other gets $100.