A closer look at John Lackey's first start with the St. Louis Cardinals

John Lackey was solid in his Cardinals debut. He will be jockeying with Lance Lynn for the #2 spot in the rotation come playoff time, I believe.

Share All sharing options for: A closer look at John Lackey's first start with the St. Louis Cardinals

Three days ago, John Lackey made his first start in a St. Louis Cardinals uniform since being acquired from the Boston Red Sox. Over seven innings, he scattered seven hits, allowed two earned runs, struck out four, and walked none. For perspective, Joe Kelly, one of the two players sent to Boston in the deal, has completed seven innings in a start just twice in 38 career attempts. Statistically speaking, Lackey had quite the debut, and his teammates were able to rally in the seventh so that he could record his 150th career victory (for what it's worth). Thus, the primary outcome (a Cardinals victory) was desirable, but what does the PITCHF/x data from BrooksBaseball have to say about the start?

He threw his fourseam fastball slightly more often than normal (48.6% versus 43.5% in career), and the fact that the velocity is virtually identical (92.4 MPH) to his career fourseam velocity (92.3 MPH) is a good sign for the 35 year old. Like his fourseamer, the sinker had basically the same velocity as his career average (91.7 MPH versus 91.8 MPH), but it had a slight increase in horizontal movement (-8.34 inches versus -7.92 inches). It may not seem like much (0.42 inches), but for an aging right-hander, it is pleasant to see that he is getting slightly more movement on his sinker without sacrificing any velocity. The velocity and horizontal movement of both of his breaking balls were less than his career averages, but as you will see later in the GIFs, that doesn't mean they were any less effective.

One of the most appealing parts of Lackey's outing was the fact that he pelted the strike zone all game, as you can see by the strike percentages listed in the table. He threw 109 pitches, and 77 were strikes (70.6%). Outside of floating a slider to Mark Reynolds for a home run in the second, Lackey really had command in the zone as well. The start was fantastic, don't get me wrong, but there is still room for improvement as well. Nearly one fourth of his pitches were in the middle stripe of the BrooksBaseball zone profile, so going forward, it would be nice to see a bulk of those pitches being lower in the zone.

GIF of the strikeout of Carlos Gomez on a 95 MPH fastball (4 fourseamers in the AB):

Lackey started the game off by challenging Gomez with four straight fourseam fastballs (average velocity of 94.6 MPH). Gomez clearly wasn't up for the challenge—whiffing on all three swings he took. Fortunately for his leg, he learned from past mistakes and chose to go the bat-meet-ground route to release his frustration. Setting the tone for a debut with a strikeout (especially with an All-Star at the plate) had to be quite the confidence boost for Lackey.

Lackey was crafty with Rickie Weeks (FB-FB-CB-SL-CB-SL)—striking him out with a filthy 84 MPH slider off the plate. He struck out Gomez for a second time in the third, this time with a slider down, away, and out of the zone. His final strikeout, of Mark Reynolds, just may be my favorite sequence by a Cardinal pitcher this season: 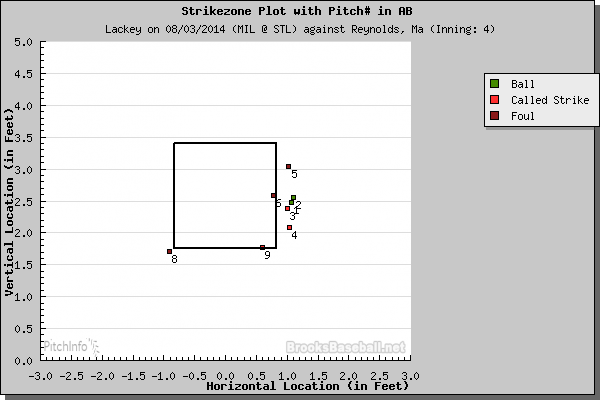 Lackey had a plan—to pelt the outside corner—and he only strayed from that plan once, and it ended up being a perfect set-up/put-away pitch combination. He remembered the home run he allowed back in the third, and to avoid the possibility of hanging a slider, he simply avoided it this time around. Instead, he gave Reynolds a heavy dose of the hard stuff: four fourseam fastballs, four sinkers, and one curve. By the fourth inning, the home plate umpire had established the strike zone enough for the veteran to feel comfortable going a few inches off the plate. By doing this, he was able to basically eliminate any power threat from Reynolds. That's quality pitching, folks.

Lackey is going to be an integral component during the stretch run, and the Cardinals will be reliant on him if they want to go on a deep run in the playoffs. Look for him to play a Chris Carpenter-type role going forward. Oh, and don't forget about next season. The fact that they have him for roughly $500,000 in 2015 is one of the best values in baseball (BVIB™).