Kolten Wong has had his share of ups and down in his rookie season. His overall numbers might not be as good as he had hoped entering the season, but this season has shown promise as he heads into the final month of the regular season.

In the first five months of the season, Kolten Wong has been the Opening Day second baseman, a part-time player, demoted, recalled, hit the disabled list, and promoted to the number two spot in the batting order. The season has been a fair share of disappointments and advancements. Wong's season has not gone as planned, but he has still been a positive contributor as an average everyday player while showing the potential for more.

Looking at his overall line could get the impression that Wong has had a fairly steady, yet unspectacular season. Looking at his statistics month by month paints a very different picture. Here are Wong's wRC+ this season by month. 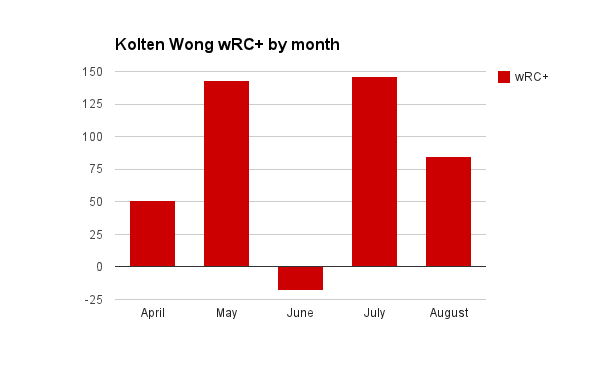 He struggled out of the gate which caused Mike Matheny to quickly move Wong to the bench after Mark Ellis rushed through rehab. Wong's benching caused John Mozeliak to move Wong to Triple-A to make sure he received regular plate appearances. He played well in May after making it back to the active major league roster. His numbers took a dive in June as he attempted to play through injury, eventually leading to a stint on the disable list. He caught fire immediately upon his return, and was rewarded with regular time in the important second spot in the lineup. He has returned to earth in August, providing numbers close to his season average. 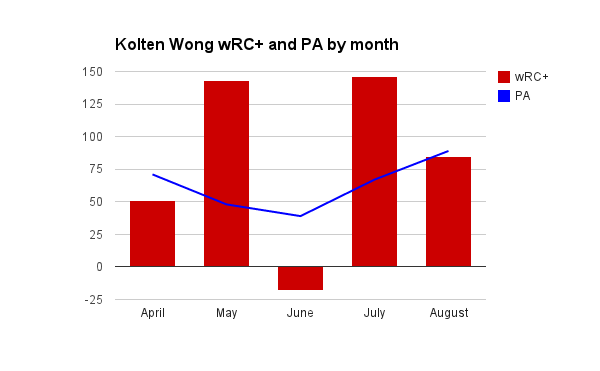 In July, Wong received more plate appearances than he had in any month since April, and with time to go this month, he has already had more plate appearances than May and June combined. Wong's inconsistency with playing time, injuries, and adjustments to major league pitching are exactly why the Cardinals acquired Mark Ellis in the offseason. Unfortuntely, whether due to falling behind after opening the season on the disabled list, advancing age, adjusting to part-time play, or simply bad luck over the course of 191 plate appearances, Ellis has not delivered as expected. He is hitting just .192/.267/.228 for a wRC+ of 39, by far the worst season of the 37 year-old's thirteen-year career, and he is currently on the disabled list. Fortunately, Wong has been able to carry the load for the past two months.

Wong has done a very good job providing power and speed. His .140 isolated slugging is certainly a surprise. He was projected by ZiPS entering the season to hit eight homers and steal 19 bases. He has already exceed the homer total in 200 fewer plate appearances and he is just one steal away from reaching 19. His 4.9 base running runs (BsR) at Fangraphs is 12th in the majors. His 18 stolen bases are seventh (Renteria with 34 in 2003 is first and Tony Womack with 26 in 2004 is second) in a Cardinals' season over the last 15 years, and with two more steals he would have the most for the Cardinals since Cesar Izturis stole 24 in 2008.

Since coming off the disabled list on July 6th, Wong has hit .263/.293/.468 for a wRC+ of 112. The on-base percentage is lower than it should be, and Ben noted that there are better options than Wong for the second spot in the lineup, but Wong's power has made up for that deficiency even if he should be lower in the lineup. Going forward, it is reasonable to expect that the average and on-base percentage will rise as some of the power returns to earth. Wong's rookie season has been uneven, but his overall line is fairly close to expectations and he has played well since returning from the disabled list. He has played solidly at second base, and has helped deepen the Cardinals' lineup.

Uncertainty is part of the game with rookies, but Wong has justified the organization's faith in him after a disappointing start to his career. Absent a September matching his July, Wong is not likely to jump in Rookie of the Year contention against Billy Hamilton and Jacob deGrom as the most likely candidates, but he has shown enough to think he could have an All-Star game in his future. Young, solid, cost-controlled players are an important part of the Cardinals' organization and Wong has shown the ability be just that in a tough rookie season.