The streaking Cardinals roll into Philadelphia for a three-game series versus the sad-sack, $175-million-dollar-payroll Phillies.

The Cardinals you know. The Phillies? You might have in your head a vague idea of a fading, moribund team run by a blinkered and recalcitrant general manager, a stars-and-scrubs team overrun with scrubs, a team whose best players ply their trade like the cast of a Lars von Trier film: amazing individual performances, questionable direction, overall grim experience. (Allow me to go on.) A club with a gorgeous, Hall of Fame-worthy second baseman and a Hall of the Very Good-worthy shortstop. A team with noted St. Louisan Ryan Howard, whose every plate appearance is fraught. A team with a storied distant past, a storied recent past, and an absolute opposite-of-storied present. A team whose fans are looking excitedly to October in anticipation of football season.

That's all more or less true.

For a sample of the current mood among Phillies fans, allow me to quote at length from a recent post from Wet Luzinski at the Phillies' SBN site The Good Phight:

But for a few weeks in late July and early August this summer, a Philadelphia baseball team gave us that ride again.

It happened to be a bunch of 12- and 13-year-olds from Taney Youth Baseball Association, a collection of kids from various parts and backgrounds of Philadelphia

It was so fun to watch stellar pitching, crisp hitting. Even the defense was spectacular, especially when you consider the age level. It was even fun, albeit a littl queasy toward the end, to watch the media hype machine jump on Mo'ne Davis, Taney's pitching star who just happened to be a...girl! It was fascinating to watch good coaching, on both sides...

Alas, we now return you to your regularly scheduled baseball season, unfortunately and already in progress. The Phillies are 11.5 games out of the wild card. (There are now two spots, so it's easier even than when they made the playoffs the last time.)

Thanks Taney, for everything. We loved watching you play. We can't wait for it to happen again in Philadelphia.

(We're looking at you, Phillies.)

Mo'ne Davis and Taney's run were exciting, in absolute terms, but the reason I quoted Luzinski at length is that you really feel his frustration with the Phillies emerge as the hot-burning fuel for his ardent support of the Philadelphia little-league team.

So how did they get here? I recommend listening to Jonah Keri's recent podcast with Philadelphia Inquirer writer Matt Gelb, in which they quickly diagnose the Phillies' maladies as such: a part-willful, part-accidental combination of poor drafting, poor development, and a front office that is committed to having a certain type of club, and which time and again has chosen to keep its guys instead of trading them away for prospects. Ruben Amaro and his partners know when to hold 'em: always. Folding 'em? Not so much.

And yet for all the anger and exasperation directed at the Phillies, it's a mistake to lay all of it at Ruben Amaro's feet. Time and chance operate in all things. Prospects fail. The trade market disappoints. Et probably cetera. Just imagine a world in which Walt Jocketty and his philosophy still obtained in St. Louis, in which Albert Pujols was signed to that bananas contract the Cardinals actually did offer him, and in which the Cardinals' astounding success in drafting and developing pitchers (and a few hitters) was less successful by like 50%. A world in which the Cards' so-called struggles this year were seen not as mystifying underperformance but as a depressing and accurate result of true talent. It's not that hard to squint and see the Cardinals in the same boat.

Ah but then again, maybe it is! Thus the Phillies.

Shelby Miller looks to continue his stellar run of exasperating starts tonight, going against one Kyle Kendrick, who is married to former Survivor contestant Stephenie Lagrossa: 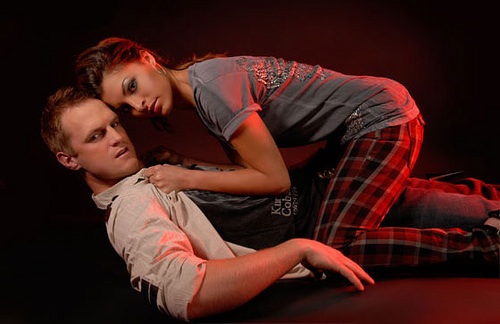 Have fun with that one.

One thing to watch out for with Kendrick is for the Cardinals' hitters to get to him right from the word go: In 25 games started this season, he has a 9.00 ERA in the first inning.

Incidentally, Kendrick's 2011 season was wonderful: 114 innings of 3.22 ERA pitching and he ended up with 0.0 fWAR. This season his FIP- is 126 and his ERA is even worse. He's a righty, so look for Daniel Descalso at shortstop.

Buchanan has a 4.20 FIP in 78 innings in this, his rookie season. His GB% is 48.4, and he gets a lot of those grounders off his cutter, his most frequently thrown pitch. He throws a four- and two-seam fastball, a cutter, a change-up, and a curve, with none dominant. He gets the most whiffs per swing on his change-up.

Buchanan throws righthanded, so be on the lookout for Descalso at short.

Two of the worst pitching staffs in baseball jettisoned Jerome Williams this season, but the veteran righthander has found a new home with the pitching-starved Phillies.

A couple of notes:

Editor's Note: Oh, hi there. It's me, Aaron Finkel. I'm here today to tell you about an exciting new opportunity offered by FANDUEL. SB Nation's partner FanDuel is hosting a one-day $18,000 Fantasy Baseball league for tonight's MLB games. It's $2 to join and first prize is $2,000. Jump in now. Here's the FanDuel link for today's games. Try FANDUEL today!