It's time to stop blaming the Cardinals offense

The Cardinals offense has struggled at times this season, but it has performed better than the number of runs would indicate.

Share All sharing options for: It's time to stop blaming the Cardinals offense

Until about a week ago, the Cardinals struggled to score runs all season. Through Tuesday night's game, the Cardinals were 14th in the National League in runs scored. Only the woeful Padres had scored fewer runs. While the Cardinals had very high expectations for the offense coming into the season, they have struggled but their peripheral statistics indicate the Cardinals have an average offense. Given better luck down the stretch, the Cardinals should score more runs the last six weeks of the season.

The average slash line for non-pitchers  in the National League this season is .256/.320/.396. The Cardinals exceed those numbers in batting average with .259, on-base percentage with .326, while unsurprisingly trailing in slugging with .384. Those numbers result in a wRC+ of 101, just above average. The decent offensive numbers have not shown up in the scoring at this point. The Cardinals have scored 472 runs, well below the National League average of 498. Here is how those numbers stack up on a monthly basis. 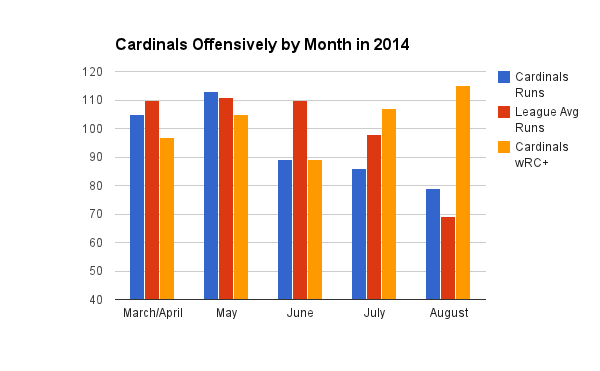 The Cardinals actually had a decent first two months of the season offensively, but it was viewed as a disappointment at the time coming off a league-best 112 wRC+ and .278/.342/.416 line in 2013. The offense was not supposed to be merely average. When it could not take advantage of spectacular starting pitching, run-scoring came under the microscope, leading to benchings for Peter Bourjos, a demotion for Kolten Wong, a callup for Randal Grichuk and calls to bring up Oscar Taveras all in the name of helping the offense. The problems became worse in June, as the offense could not score any runs and the poor wRC+ of 89 matched the results. The offense picked back up in July, but the runs did not follow.

In August, the Cardinals above average wRC+ has finally matched up with above-average scoring. The numbers in August are through Tuesday night's game and do not include the barrage of offense from last night. The following chart further shows the disconnect this season between the Cardinals' offensive statistics and run-scoring.

The Cardinals overall numbers are solid even if the runs have not yet caught up. Last season was a perfect storm of sort for the Cardinals as they had a great offense and they were able to combine that with incredible luck with runners on. The Cardinals offense has dropped off and their sequencing has been below average this season. While the last week has been encouraging for the Cardinals, perhaps more encouraging is how the overall lines for many Cardinals' hitters have become well above average.

The Cardinals have seven hitters with at least 300 plate appearances (107 total) on the season still with the team. Here are their numbers and National League rank for wRC+.

A.J. Pierzynski and Tony Cruz are no substitute for Yadi, although hopefully the Cardinals will get him back relatively soon. Wong has hit well since coming off the disabled list in early July, hitting .262/.291/.482 with a wRC+ of 116 during that time. Adding Oscar Taveras, who I still believe in, and the Cardinals have a very good offense that mixes both good performances this year as well as solid expectations for the rest of the season. Looking at the overall runs for the Cardinals this season may yield some disappointment, but the team's offensive numbers have begun to align with runs scored. The Cardinals have a deep lineup of solid players and they look dangerous and capable of winning games on their own as they chase the division crown.