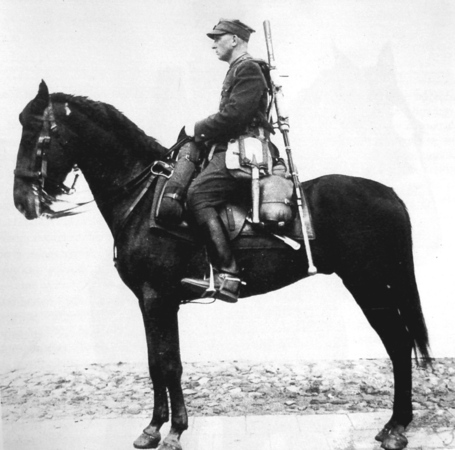 The Polish cavalry never actually charged Nazi tanks on horseback. It's a myth.

...if they had done it, though, Ruben Amaro would have respected them for fighting the war the right way.

The Phillies. The fucking Phillies, man.

I won't lie: I spend more time thinking about the Phillies than I do about any other team outside the NL Central. (What's the line – tragedy is I cut my finger, comedy is you walk into an open sewer and die? I do like comedy.) Let me tell you about it.

1. The view from inside

I read a book earlier this summer about San Francisco from the late '60s to the '80s. There's a scene in there from sometime around '67 or '68, where Jerry Garcia and one of his bandmates in the Grateful Dead are trying to get a (relatively) strait-laced concert promoter to trip on acid. He won't do it voluntarily, so they start trying to give it to him on the sly, by hiding it in a cookie or something. Finally, they catch him racing back and forth before a show snagging sips out of Cokes people are holding, line the lip of a can – and like that, they have him.

You find yourself chuckling along with them (or at least I did) before you step back and realize it's a story about non-consensually dosing a guy with a powerful psychedelic, and it's funny at least in part because you've immersed yourself in their perspective, where that genuinely did seem ok and funny. Nowadays - or, really, from most perspectives throughout history - not such a harmless barrel of laughs.

So, as you may expect from the context in which I'm relating that anecdote, this got me thinking about the Phillies – and not in the "who got to the soda machine at Citizens Bank Park" way you might be imagining. See, the thing about a cultural revolution is that in the middle of it you've got people operating on completely irreconcilable worldviews, the establishment view and the insurgent one, with the adherents of each firmly convinced that they've got the truth on their side. And while it can seem afterwards like the right answer was clear and simple, somehow a lot of people always manage to be wrong in the moment, so things probably weren't that simple after all. You stick with the establishment, and sometimes you're the guy saying that widespread use of heroin might be less of a pathway to spiritual revelation and more of a public health crisis; other times, you're Ruben Amaro.

What does it look like to be Ruben Amaro (or Ed Wade, or Kevin Towers)? Well, you're sitting here on top of the world, doing things the way things have always been done, the Right Way, and suddenly there are these new guys saying everything you've ever known is bunk, and, what's worse, they're winning converts left and right, and squeezing your people out. They say up is down - and sometimes it seems to work. But for you to treat this as more than a passing fad, you'd have to throw out everything you've learned in your career. You trust your experience. You stick to your guns.

You are the establishment, which means you start out holding all the power, but, in the words of Terry Pratchett, an underdog can always find something soft to bite. In a baseball world where executives were actually spending millions of dollars on the assumption that RBIs and grit and some definition of manhood and who knows what else were more determinative of baseball success than the ability to not make outs at the plate, the Billy Beanes of the world (or Ken Tremendouses, on a different side of things) were underdogs with sharp teeth and a lot of tender flesh looming overhead. And they nipped merrily.

2. The way they thought things were

We celebrate this, for the most part, here in the blogoovoid, because understanding things accurately is fun, good baseball is more entertaining than bad baseball, and a lot of the values that the old guard were defending ranged from stodgy and mildly asinine to downright ugly. (If the tragicomedy of the late Amaro-ist Phillies helps you forget this, you only need to look at the version of this ideology that howls from Arizona in defense of its preferred way of the world for a reminder.) There's something of a trend among Smart Baseball Writers of having a chuckle at the expense of Not Smart Baseball Writers and industry types for their efforts to moralize the game, steroids, the hall of fame. And they're right – the game, and the business of the game, don't adhere to your ideas of morality.

Ruben Amaro and his kind of people believed that they did. They believed in a world where Ryan Howard would be a lastingly great hitter in part because he had the guts and the focus to come through in the clutch and drive in runs, where David Eckstein possessed hidden worth somewhere down in his scrappitude. They believed deeply enough in that world that they kept trying to cling to it, or to summon it back into existence, long after the tide had clearly turned against them.

Rationalizing the game, actually determining what works and what doesn't work, destroys the illusion that we might live in such a world, and evaporates the uncertainty that allowed GMs and managers to pretend that we did. All that is solid melts into air, all that is gritty is profaned, and GMs are at last compelled to confront with sober senses the real value of baseball players.

The thing is, I suspect most of us would rather live in a world where virtue was genuinely rewarded in the sports we watch.

It's probably a coincidence that it happens to be the sabermetrically-beloved Rays employing Josh Lueke – but it still makes a nice illustrative point. Once you recognize that baseball is a market, not a morality play, you may discover that rapists with acceptable pitching skills are the market inefficiency of the moment. And as long as you're living by the rules of that market alone, there's no reason for you not to sign them. I wish it wasn't that way, and that the moral arc of the universe bent with the kind of force that could straighten out a curveball when karma called for it. It doesn't.

If someone has the generosity to take a stroll into an open sewer for my entertainment, I'm not NOT going to laugh. But hey, Phillies – I see you. You took the plunge into that manhole because you believed there was a better world in there, whatever that looks like to you. Sure, I'm clutching my sides, but I'll at least tip you a meaningful little nod as you plummet towards the swirling river of shit. Good luck!