Mizzou Night at Busch ends with a Cardinal victory.

Maybe the most intriguing stuff about this game happened before it even started, when Mike Matheny made the possibly reasonable decision that Oscar Taveras needed another day off to recharge--or less reasonably he decided that Oscar Taveras is an overhyped lollygagger--either way, he then started not Oscar nor Peter Bourjos but Shane Robinson in right field against San Diego righthander Tyson Ross.

Sugar Shane has his own delightful virtues, but the relevant thing here is that he's not Peter Bourjos and he will never be Oscar Taveras. He's a gunsel; he's not Sam Spade.

We all know Lance Lynn by now. How'd he do tonight?

102 pitches, 53 GB%, 8 groundouts to 1 flyout. His FIP (3.08) and ERA (2.91) are both ninth-best in the National League now. And while the Padres aren't the most challenging team to pitch against--far from it!--Lynn did a great job of getting ahead of hitters. Through three innings the only hitter he didn't have either an 0-2 or 1-2 count against was the Padres' pitcher, whom Lynn eventually struck out.

In the fourth, Lynn walked Rymer Liriano and then made this face: 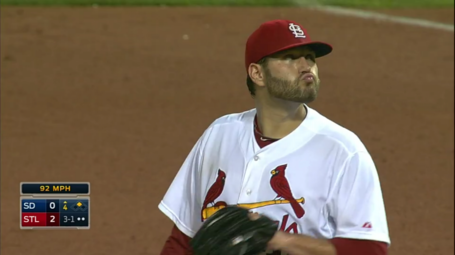 but would then get Rene Rivera to ground out to Jhonny Peralta for the final out of the inning.

The fifth inning saw Lynn concede consecutive singles and then a first-pitch double from Will Venable on a fastball that he was sitting on. With runners on second and third and one out, Lynn struck out Tommy Medica and induced a flyball out from lefty Seth Smith to end the inning.

Speaking of lefties, Lynn's ancient enemies: how'd he do against them tonight? Pretty good, though the Padres' two biggest hits of the night were doubles by lefties Venable and Smith. Other than that, though, it was the same story as it was for the righties: ahead in the count, good command, strikeouts, and lots of grounders.

One aside here: The Fox Sports Midwest announcers were Rick Horton and Al Hrabosky. I have no quarrel with Horton, but having to listen to Hrabosky talk about how, in the fifth inning after Lynn gave up the one run he surrendered all night, Derek Lilliquist needs to get out there to the mound to calm Lynn down and keep him from falling apart and losing it, and how "It almost doesn't even matter what he says to Lance...it's more just his manner"--to hear Al talk about that stuff, in that way, over and over and over again? It's not pleasant. Turn the page, Al.

The Cardinals and their Offense

The Cardinals scored their runs tonight in a manner befitting the team with the third-highest GB% in the National League: eight singles, four walks, two HBP (both by Jon Jay), and a batting line of .258/.378/.258. Runs were batted in on the following plays:

Oscar Taveras with a pinch-hit single, which is a really stupid sentence for a team starting Shane Robinson. #stlcards

And Sugar Shane--whom I wish a long and happy life--went 0 for 4.