After one good and one ugly start, Lackey looked to be more like the solid starter the Cardinals traded for.

The lineup was a bit of a surprise as Peter Bourjos, Shane Robinson, Mark Ellis, and Tony Cruz were all rotated in to face the lefty. Matt Holliday also got the start, despite being lifted in the 7th last night with tightness in his left knee.

In other additional news, Rob Manfred has been elected to replace departing Bud Selig as Commissioner of Baseball. 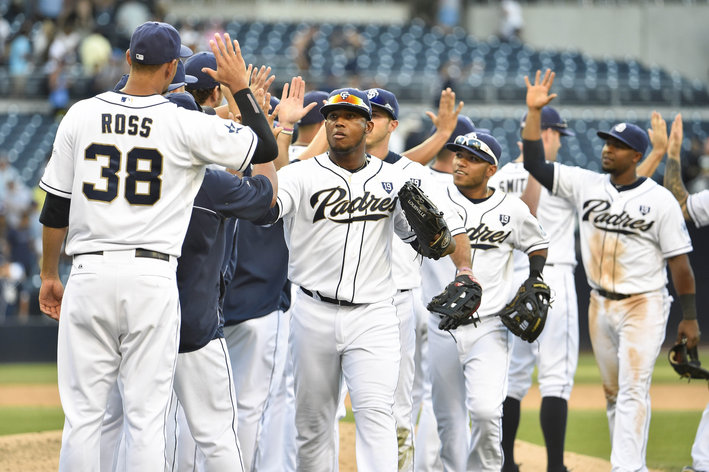 The 55-year-old Manfred, currently MLB's chief operating officer, was elected in a vote by representatives of the 30 clubs on Thursday, the final day of the quarterly Owners Meetings. He was a finalist along with Red Sox chairman Tom Werner. MLB's executive vice president of business Tim Brosnan reportedly withdrew before the first vote.

Oh, and no DannyMac on the broadcast tonight. So that was swell.

With one out in the first, Suga Shane made a nice running catch on a deep Tommy Medica fly.

Our Favorite Team got on the board first in the second. Matt Adams reached on a single, then Jhonny Peralta Hhome Rhun! 2-0 Good Guys.

In the top of the 3rd, Alexi Amarista doubled to right leading off. Chris Nelson then proceeded to work 13 pitches from Lackey. Nelson ultimately struck out, but it was a helluva tough PA.

Top 4, Seth Smith ground rule doubled into LF corner. Jedd Gyorko then lined to Peralta, who knocked the ball out of the air and was still able to get the out at first, Adams digging out the low throw.

Then things got a little sideways in the 6th. Will Venable drew a lead-off walk. Medica doubled to left field, Venable to 3B. Seth Smith took the second walk of the inning, loading the bases with nobody out. Gyorko grounded to first for a run scoring fielder's choice. Rymer Liriano slapped a bounder to 3B, Carpenter wasn't able to get the throw to first in time. Run scores, 2 - 2 tie game.

Seth Maness pitched a clean 8th inning on just 9 pitches, getting two on the ground and one in the air.

Alex Torres, he of the unflattering-but-practical protective headwear, was summoned to replace Stults for the Cardinals half of the 8th. Tony Cruz greeted him by working a tough PA. On the 7th pitch he appeared to have struck out. Home plate umpire Bob Davidson ruled that Cruz had foul tipped the pitch, but called him out as the catcher appeared to have held it. The first base ump instead let Bob know that the ball hit the dirt, and that Tony had a life. Which is all fine and dandy, except that Cruz doesn't appear to have made contact with the ball at all. On the very next pitch, he took it up the middle for a single.

Matheny used his first lefty off the bench, Daniel Descalso of course, to bunt Cruz over. Instead of laying down a bunt, Dirty Dan watched 4 straight balls go by and took his base. With Cruz at second now, Kolten Wong was brought in to pinch run for him. Matt Carpenter did his Matt Carpenter thing, singling sharply to left and loading the bases. That was it for Torres, pulled without recording an out.

Nick Vincent replaced Torres, who gave up a long double into center field to Jon Jay on his first pitch. Jay, pinch hitting for Bourjos, drove in two putting the Cardinals ahead 4 - 2.

But there was still drama yet. Trevor Rosenthal, save situation in hand, had the 9th. Yasmani Grandal - Single. Liriano flew out deep to right, but Shane was able to track it down on the track. Amarista single. Then Rosie walked Chris Nelson to load the bases with one out.

(deep breath) Jake Goebbert, pinch hitting for Vincent, lined a singled into right. Grandal scores easily. Amarista comes around from second. Robinson's throw to the plate goes up the line. Pierzynski gets the throw and attempts to tag Amarista as he goes by. He is called out initially but A.J. went back to tag him again. Amarista tagged home, A.J. then tagged him again. Replay ensues. Eventually the out call is upheld. Padres manager Bud Black was immediately out to argue and just as immediately ejected. (It would be nice to know the reasoning for these rulings, wouldn't it? Even Black didn't get an explanation).

But the fun wasn't quite over yet. There's still only two outs and runners at first and second. Will Venable walked on 4 straight, loading the bases yet again. Thankfully, Rosie struck out Medica to finish this craziness.