What ended up a close game was for the most part a demonstration of Giancarlo Stanton's greatness (and Matt Holliday's, too).

This very morning Craig wrote about Shelby Miller's struggle to become--or become again--the front-line starter he was in the first half of 2013. His poor pitching this past calendar year seems to be a snarled result of mechanical and developmental issues, with maybe a soupcon of injuries involved, too. He struggled and we despaired. We blamed Matheny, we blamed the gods, we blamed Shelby.

And always we're looking for glimmers of his previous excellence--and Shelby's last three starts offered some signs that some of his problems were being worked out: his walks were down, he seemed to be repeating his delivery, and the psychologists among us posited that his best friend Joe Kelly's abrupt trade away from the team had finally plunged Shelby into the cold and bracing waters of professional baseball--the dispassion of which I guess he was supposedly unaware.

He pitched okay. Two of the strikeouts were of the Marlins' starting pitcher Tom Koehler, and three of them came on Shelby's first run through the Marlins' lineup. BrooksBaseball says he got nine swings-and-misses on the night, or about 10% of his pitches. If batters were swinging through ten percent of Shelby's pitches this year, he'd be having a fantastic season (unfortunately, his SwStr% on the season is just 6.8%, down from 9.0% last year).

That gif's from Miami's SBN site Fish Stripes, rightfully gleeful about Giancarlo Stanton's night: he hit two home runs off Shelby and then took a four-pitch walk, while in the meantime making a fantastic diving catch to rob Kolten Wong of a leadoff hit in the fifth.

How did Shelby give up the two dingers? He got there in two different ways. The first PA was simply two 96-mph fastballs: 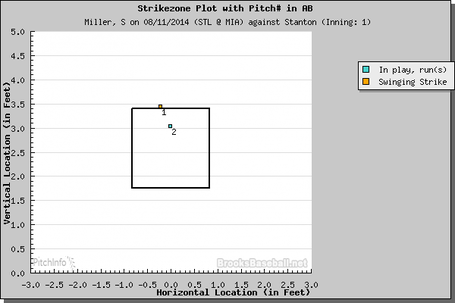 As good as Shelby's fastball is, look at the location of that first pitch--a good one, up and away, and Stanton swung through it--and then look at the second one and realize that sequencing is a thing, and that if you wanted Giancarlo Stanton to hit a home run on your fastball, this would be a pretty good way to do it: Throw the exact same pitch, only where HE'd want it. 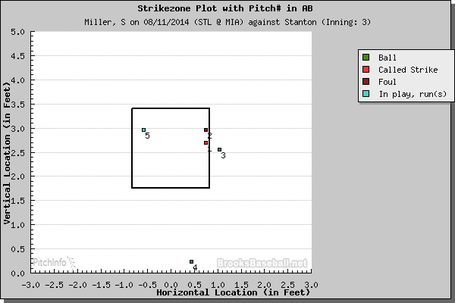 Sam Freeman pitched the sixth and seventh innings, striking out four and allowing just one run--on a wild pitch and a throwing error to third by AJ Pierzynski, stupidhead.

The Cardinals mounted a rally in the ninth inning that came just short, as Matt Adams struck out swinging with the tying run on first base.

WPA graph, in which you can see the game's brief trough of hope: