Cardinal offense awakens, backs Lynn's solid outing to avoid sweep and pick up a game on Brewers and Pirates.

Share All sharing options for: Cardinals @ Orioles recap 8.10 - Cardinals avoid sweep; pick up a game on Crew and Bucs

This has been an UG-LY series thusfar.  New acquisitions Justin Masterson and John Lackey could not contain the bats of the hot-hitting O's.  I've never been so happy to see Lance Lynn starting a game.

The Continental gave us the series preview.  Here's what he had to say about today's starter Kevin Gausman:

Kevin Gausman owns a mid-90s fastball to go along with a slider that can be good, but is still a work in progress. He also throws what he calls a "split change", which often gets put in the split finger fastball bucket when identified.

Designated hitter Matt Carpenter led off the game with a line drive over the shift into right.  Kolten Wong and Matt Holliday followed up with singles of their own to load the bases.  Matt Adams grounded into a fielder's choice, and Carpenter came around to score the first run of the game.  Peralta flared a jam shot into shallow center to score Wong.  Cards lead 2-0.  Gausman continued struggling.  Jon Jay worked a full count walk, to load the bases for Oscar Taveras.  He lined out to center, and Adams (or Oquendo) made the ill-advised decision to tag up and try to score from third.  Adam Jones rifled it in, beating Adams by plenty, and ending the inning.  Gausman required 36 pitches to get through the first.

Gausman had an easier time in the second, working his way through Tony Cruz, Daniel Descalso, and Carpenter with only 14 pitches.

Wong singled to lead off the third.  With two outs, Peralta walked, and then Jay drove Wong in with a liner into right field.  Cards lead 3-1.

TJ MacFarland took over in the sixth.  Jay led off by barely beating out an infield single to Machado, who made a great throw that was just too late.  Taveras followed that up with a single to center.  Descalso continued his good series (offensively, anyway).  He singled to right, driving in Jay.  Cards lead 4-2.  Wong dribbled a ball to second.  Jonathan Schoop tried to barehand it, but couldn't come up with the play.  That led the bases with two out for Holliday.  He just got under the changeup, driving it to the warning track in center field to end the inning.

In the seventh, with Jhonny Peralta on first base (single), Jay grounded one to the shortstop, who shovel passed it to Schoop at second.  Schoop dropped the ball, but the second base umpire called Peralta out.  Matheny challenged the call, supposing that Flaherty never caught the ball.  After a fairly lengthy review, the umpires agreed and overturned the call.  Buck Showalter and a fan both went a little crazy at the overturn, and were asked to leave.  The overturn ended up not having a bearing on the game, as Taveras and Cruz contributed the second and third outs without pushing any runs across.

Zach Britton came in in the ninth.  Peralta singled off of him, and Jay walked.  Peter Bourjos, who had pinch run for Taveras in the 8th, drove an authoritative homer into the right field seats.  Cards lead 8-3.

Nick Markakis and Manny Machado reached on dribbling groundballs, one in the infield (Descalso air-mailed a throw that wouldn't have gotten the out anyway), and one just into left field.  Nelson Cruz doubled to left, driving in Markakis.  Cards lead 2-1.

Lynn worked a couple of impressive looking backwards K's to start out the second.  Here's his pitches to Caleb Joseph and Ryan Flaherty: 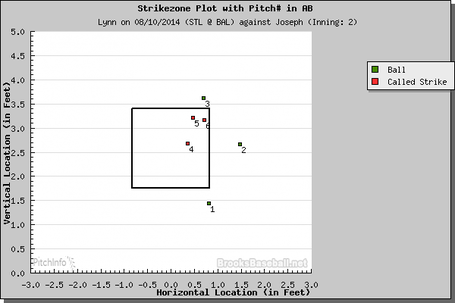 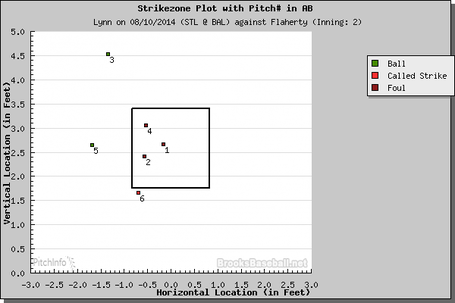 In the third, Lynn continued his corner-painting.  Some calls went his way, some did not.  He gave up singles to Markakis and Adam Jones, and a walk to Cruz to load the bases.  After a battle with Delmon Young, Lynn got him to pop out to end the inning.

Lance showed some signs of ineffectiveness in the fifth.  He allowed singles to Markakis and Machado, leaving the ball up in the zone.  Markakis advanced to third on a sac fly, and then scored as a wayward pitch in the dirt bounced into the dugout off of Tony Cruz as he tried to block it.  Cards lead 3-2.

Lynn came back to pitch the sixth.  He gave up singles to Young and Flaherty and got two outs before Matheny called on Randy Choate to pitch to Markakis.  Choate threw the slider he wanted way out of the zone, but Markakis got the end of the bat out to it, serving the ball into right field, scoring Young.  Cards lead 4-3.  Siegrist came in to finish out the inning, and did so on his very first pitch.

Pat Neshek pitched the seventh and eighth and was absolutely dominant, using 25 pitches to mow through the six batters he faced, including four strikeouts.

Trevor Rosenthal had no trouble holding the five run lead, striking out two to close out the game.

Tune in tomorrow as the Birds head to Florida to take on the Fish.  Shelby Miller will take the mound against Tom Koehler.  First pitch at 6:10 CT.