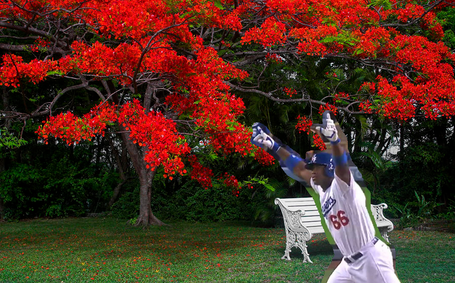 A young Goliath prances beneath a flamboyant tree. But is he himself flamboyant? via s27.postimg.org

As long as men and women have gathered to watch athletes go toe to toe, one virtue has been praised above all others: grit. As the poet Virgil once said:

Roughly translated, this means "I'll take a guy with guts, determination, and the will to win over some fancy pants bat flipper any day of the week."

However, as time has gone on, more and more have come to recognize the beauty inherent in baseball flamboyancy. The overly dramatic one handed follow through, the unnecessary shoestring basket catch, and the merits of the flat billed cap have all come to be appreciated by a large portion of the baseball community.

As flamboyance becomes more and more desirable in a baseball player, it would behoove the saber community to create a metric that can be used to evaluate player flamboyance. Thus is born wFLAMBOYANCE+

Much like wRC+, wFLAMBOYANCE+ can be used to evaluate baseball players based around the idea that a value of 100 denotes an average flamboyance score, while higher values denote more flamboyant players. To calculate wFLAMBOYANCE+, I have broken baseball flamboyance into 3 main parts: FlamBATyance, FIELDboyance, and Natural Flamboyance.

FlamBATyance measures the offensive component of wFLAMBOYANCE+. BAT for short, this area of flamboyance is comprised of 4 sections, each worth 25% of the overall BAT score.

FIELDboyance (FIELD for short) is the component of wFLAMBOYANCE+ that is derived from the defensive aspects of a flamboyant player. FIELD is comprised of two sections, worth 90% and 10% of the FIELD score respectively.

The final aspect of wFLAMBOYANCE+ is determined by those qualities that are naturally inherent in a flamboyant person. They are weighted at 70% and 30% respectively.

To finalize wFLAMBOYANCE+, the three components mentioned above were combined in equal parts and scaled so that 100 would be the mean. Let's begin by looking at the least flamboyant players so far in this 2014 season:

J.J. Hardy is the winner, if by winner you mean loser. He is a product of another baseball era, and would probably be more suited to the time period after the Sultan of Swat flamboyantly called his shots by pointing to the outfield bleachers but before baseball players started doing fun things, like bat flipping or cocaine. Also of note are Jimmy Rollins, Jason Werth, Ian Kinsler, and YEAH JEETS, all of whom have had long, gritty, determined, boring, boring careers.

Without further ado, let's see who our most flamboyant players in 2014 have been:

Okay, let's have a little bit further ado. Note that I did not include pitchers as capable of flamboyance on the baseball field. This is because they are not flamboyant. They are basically machines, streamlined to maintain a certain rate of performance. When broken, they will be thrown by the wayside like so many Irish orphans during the potato famines. No flamboyance there.

Now, our most flamboyant players of 2014:

Your winner by a healthy margin is Astro George Springer, whose young, exciting brand of swinging at basically everything has propelled him to the top. Also of note are Billy Hamilton, who can turn a game into a flamboyant base running circus just by getting on base, Jason Heyward, whose flamboyancy drove Brian McCann out of Atlanta, Yasiel Puig, whose theatrics are loved by some and reviled by others, and Yadier Molina, whose fielding prowess has allowed him to hang on to the number five spot despite his age pulling down is Natural Flamboyance.

Thank you for reading, this has been AN INTRODUCTION TO wFLAMBOYANCE+ 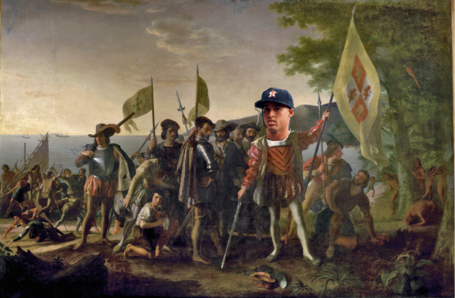