The 56-48 Cardinals are in San Diego to face the 46-59 Padres, who hit worse as a team than Daniel Descalso. No, really.

The Cards sit just 1.5 games back of the Brewers, who are next on the schedule after San Diego. Beating the Padres would be nice, but it's the trade deadline, Thursday at 3:00 central, that's drawing more fan attention right now. It's impossible to tell what sort of deal truly stands a chance of happening, but it certainly seems possible that the franchise will look very different Friday morning. Should it?

One one hand, there's a legitimate risk that the Cardinals could make a trade, even for a star, and still miss the playoffs or only grab one of the coin-flip wildcard spots. The Cardinals are missing Yadier Molina and Michael Wacha, they're getting no production out of right-field, and to talk about the thing that nobody wants to talk about, Adam Wainwright's peripherals are a little frightening right now. Is this a playoff team? Their current pythagorean record sits at a modest 53-51. This team, this year, might just not be that good, and not worth fortifying at a heavy cost.

On the other hand, the NL Central crown appears attainable. The Reds are falling apart, the Pirates don't seem particularly scary, and the Brewers are below .500 since the calendar flipped to May. The schedule is highly favorable to the Birds, and as Craig pointed out yesterday, Matt Holliday's power is finally coming around, which is a key development.

The Cardinals have been on an incredible run of success recently, and because of that they don't have the same pressure to win now that a world series starved team feels. l think they should and will sit on their hands given all the circumstances and the extremely challenging market with one exception:

If the Cardinals FO thinks Carlos Martinez and/or Oscar Taveras are going to be busts, they should trade them now. Those two players likely have immense trade value, and as Shelby Miller has taught us, a lot can change in a year.

Speaking of, in this series I'm interested in Shelby Miller most of all. I'm deeply skeptical that he's turned any sort of corner, but his command really was a little better against Chicago. We'll see. Expect to see AJ Pierzynski at least twice, and hopefully Oscar Taveras at least twice as well against the Padres' all righty pitching trio. Also, Carlos Martinez has not yet appeared out of the pen,  and isn't that curious?

Their offense is terrible.

They have a couple of guys who aren't terrible (catchers Yasmani Grandal and Rene Rivera aren't bad, 1B Tommy Medica looks ok), Seth Smith is hitting great and should have been traded, but won't be, and that's it. Chase Headley was mediocre, and he's been traded. Everything else is ugly. Cameron Maybin's .288 wOBA doesn't seem so terrible next to Chris Denorfia's .277, Carlos Quentin's .274, Alex Amarista's .266, Yonder Alonso's .259, Will Venable's .253, Everth Cabrera's .245, or Jedd Gyorko's .215.
That last group starting with Maybin has over 2000 PA's so far this year, and that's how a team can have the worst offense since 1972. Look into this abyss, but don't try to understand it.
Their pitching isn't bad. First, let's talk about Tyson Ross. He's been fantastic. Here's a nice fangraphs piece detailing how he went from being jettisoned out of Oakland for a bag of peanuts to a deserving all-star just two years later. He's a big guy who throws a really good slider and a good sinker. He'll be tough. Andrew Cashner has shown flashes of dominance, but he's hurt, and so is Ian Kennedy, who resurrected his career here after escaping Arizona. Kennedy will be a FA in 2016 and is likely to be traded in the next three days, injured or not. It's just a minor oblique strain on his part, though Cashner has shoulder issues.
Jesse Hahn is a rookie who looks to have some genuine upside He's a big guy with a sinker and big curve, but he's dealt with injury and inconsistent command. Here's the Sickels piece on him. I'm really looking forward to watching a full Odrisamer Despaigne game. I've seen several innings from him, and the guy is fascinating. He has a big leg kick with a deceptive delivery and says he throws 12 pitches including different arm slots he uses. Here are highlights of his recent near no-hitter. Just look at these two charts from that game! 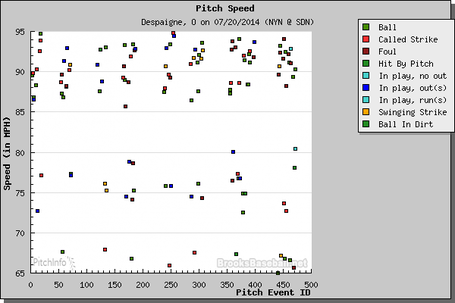 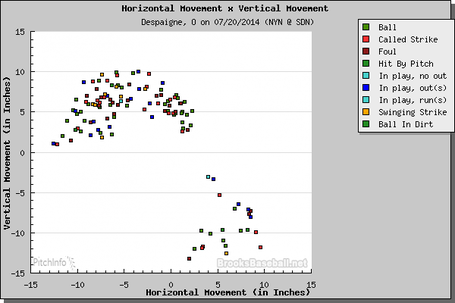 Of course he's not terribly good with these pitches, or he'd be Yu Darvish, but the varied arsenal should be a lot of fun to see, and possibly frustrating for the Cardinals.
One last note about the Padres. Remember the mediocre outfielder Jason Lane? He played for the Astros from 2002-2006 before bouncing around in the minors for five years. Well, he's a Padre now, and he made a pitching start yesterday. He's 37 years old and made his first career start, and it was pretty good! He pitched six innings against the Braves and allowed just one run on an Evan Gattis solo shot. Mid-career hitter to pitcher conversions are amazing enough, but the guy is 37. Baseball is wonderful.

Keys to the Series

Editor's Note: Oh, hi there. I'm here today to tell you about an exciting new opportunity offered by FANDUEL. SB Nation's partner FanDuel is hosting a one-day $18,000 Fantasy Baseball league for tonight's MLB games. It's $2 to join and first prize is $2,000. Jump in now. Here's the FanDuel link for today's games. The Cardinals might not be able to trade for COLE HAMELS and JON LESTER, but that doesn't mean you can't. Try FANDUEL today!