Most trade speculation has revolved around trade targets like David Price and Cliff Lee or the players the Cardinals would have to give up, like Oscar Taveras or Carlos Martinez. While the infusion of cash from national television deals and fantastic home attendance does allow for more spending, St. Louis is not a major market and payroll will be considered with any trade.

In any big trade the Cardinals consider, like David Price or Cliff Lee, the biggest consideration for the Cardinals will be the players they have to give up. Secondary, but hardly incidental in their pursuit of an upgrade, is the effect any new acquisition will have on the payroll for the Cardinals. The Cardinals entered 2014 with a lower payroll than 2013 despite increased money from national television deals. Fans have once again come out in full force, with the Cardinals on pace for more than 3.5 million fans this season. The Cardinals, through developing young players and signing prudent long-term contracts are in position to take on salary, even enough to take on another big-money player on a long-term deal.

The pursuit of David Price has not been a secret. I wrote about the fit for the Cardinals before a rash of injuries hurt the rotation. Nick Cafardo of the Boston Globe adds more color to the conversation.

The Cardinals have shown interest but would want a financial commitment, according to a major league source.

Price, set to be a free agent after the 2015 season, is earning $14 million this season (a little over $5 million for the rest of this season), and is set to make $20 million in his final year of arbitration next season. The Cardinals locked up Adam Wainwright to an extension that began this year and will pay him $78 million over the next four seasons. In his recent trade value series, Dave Cameron at Fangraphs ranked Wainwright 20th. Due to his impending free agency in 2015, David Price did not make the top 50 (Giancarlo Stanton was 15th). David Price will cost considerably more than Adam Wainwright, and it is unknown if Price is willing to discuss an extension at all. That cost, in addition to the players involved, could lead the Cardinals to someone like Cliff Lee (discussed here), who is owed potentially $52.5 million over 2015 and 2016.

If the Cardinals do indeed make a big move, and they seem prepared to do so, the payroll over the next few years will adjust significantly. Here are the payrolls according to Cot's via Baseball Prospectus since the Cardinals won the first World Series in a generation in 2006. 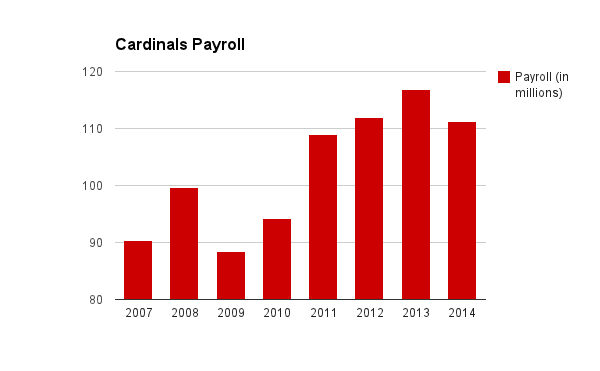 The Cardinals started off this season roughly $5 million behind where they ended the season in 2013. This difference would allow for any acquisition in-season without a significant dent in payroll compared to last season given how much time is left in the year.

Through 21 of 25 roster spots, the Cardinals are in line for a 2015 payroll of around $107 million. Those contributors likely take care of the starting lineup, an entire rotation as well as the bulk of the bullpen, leaving a few minimum or low salaried bullpen arms and bench players. A $20 million-plus addition to the rotation would either require a significant increase to the payroll or unloading a few members of the current team.

As discussed previously, two of the more likely candidates to be unloaded in the offseason are Allen Craig and Jon Jay. Both have been or are currently valuable members of the team, but their increasing salaries (likely around $10 million total in 2015) as well as cheaper, internal replacements, might make them expendable going forward. The Cardinals may make a big move for David Price or Cliff Lee, but if they do, some players currently on the roster will likely have to move in the offseason to make the payroll fit for 2015 and beyond.