The results are in.

On Monday, I asked everyone to fill out a starting lineup for the Cardinals using $27 from the picture below. 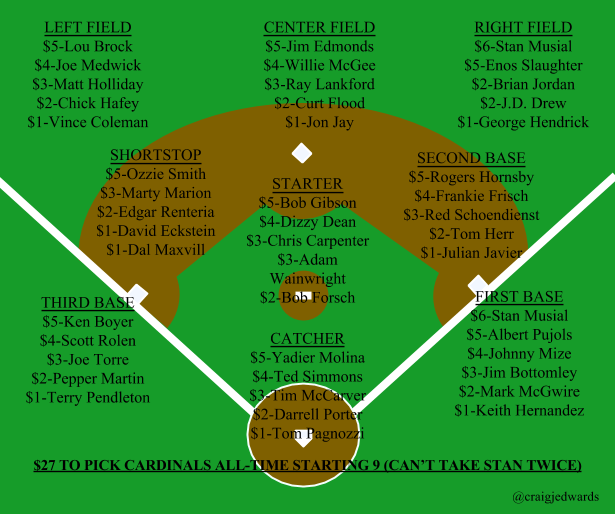 We had more than 600 responses (results here), and ended up with 495 properly entered responses. Thank you to everyone who participated. First, here are the most popular players picked. 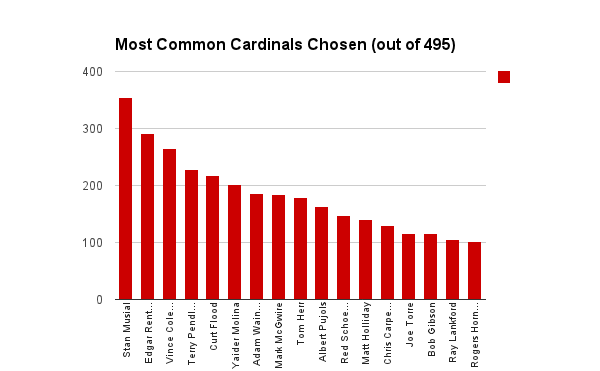 Stan Musial was chosen on 355 of the responses, with all but 20 of those coming in right field. Despite the high price tag, Musial, Yadier Molina, Albert Pujols, Bob Gibson, and Rogers Hornsby were all among the most popular selections. Here are the players chosen the fewest times. 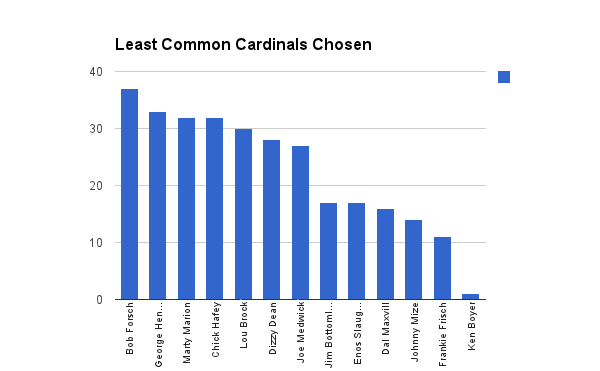 The high price tags and perhaps the time since retirement were too much for Ken Boyer, Frankie Frisch, Johnny Mize, Joe Medwick, Dizzy Dean, and Lou Brock. Dal Maxvill, Bob Forsch, and George Hendrick were not expensive, but most people found better alternatives at those positions. 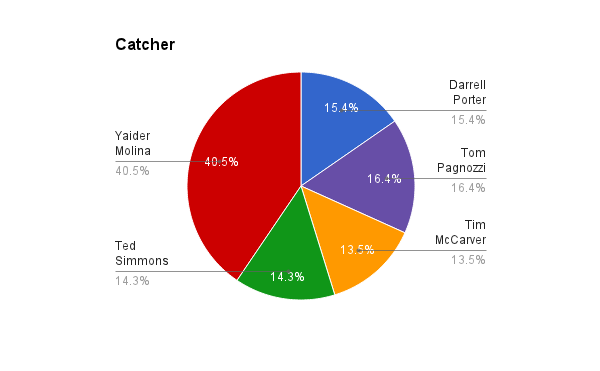 Yadi comes out as the clear winner with the rest of the choices distributed equally. 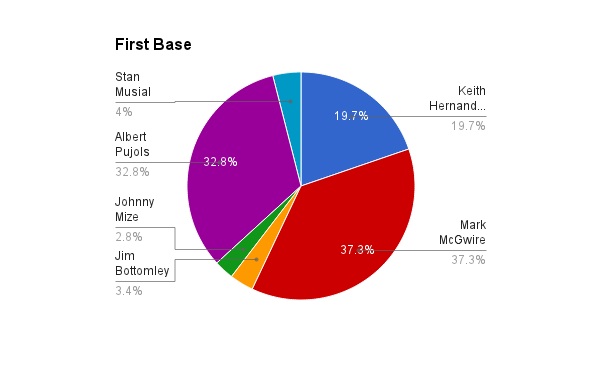 McGwire edges out Pujols as the cheaper option by three dollars. Hernandez got a lot of votes as the one dollar option while nobody else made a dent. Almost everyone opted for flexibility with Stan and put him in right field. 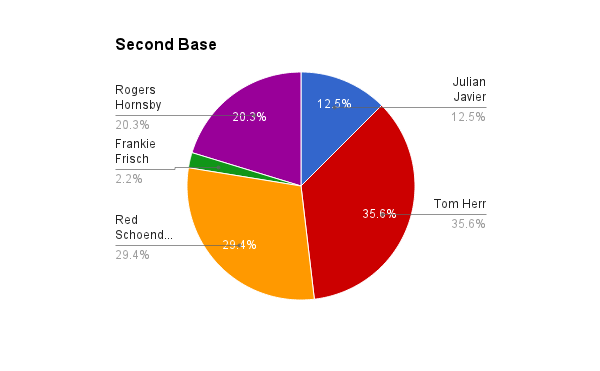 Four out of five players received more than ten percent of the vote, with the plurality choosing two-dollar Tom Herr over Red Schoendienst and Rogers Hornsby. 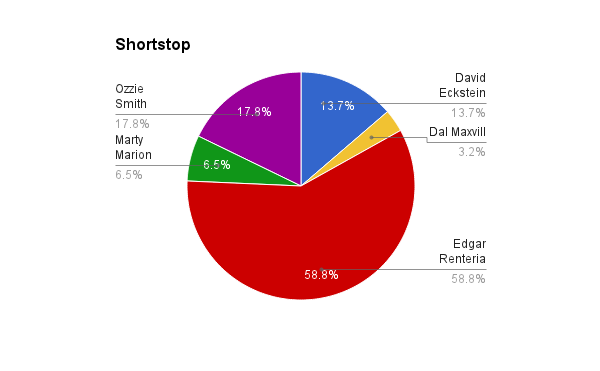 Renteria was the easy choice at two dollars for the majority at shortstop, indicating  perhaps he might have been undervalued slightly by me when making the chart. 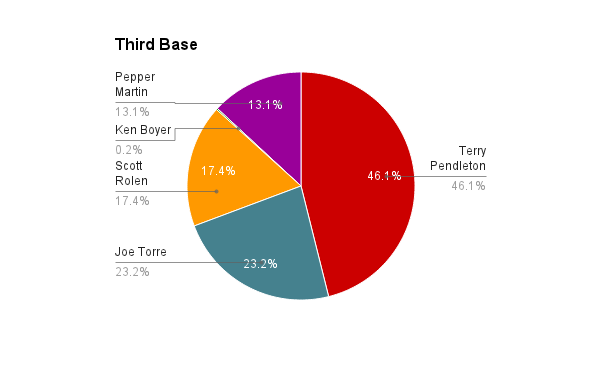 Many people chose to go cheap at third with Pendleton, choosing to spend their money on other positions. Ken Boyer was probably priced too high as he only ended up on a single response. 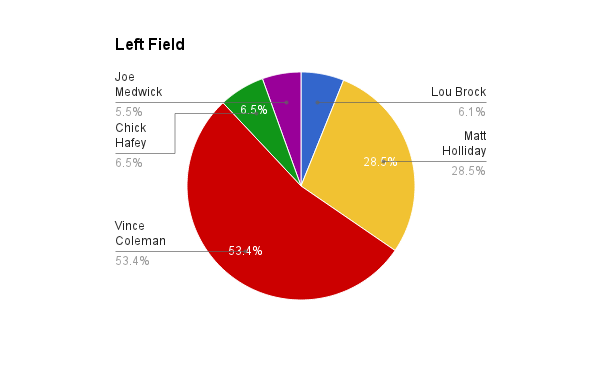 In left, the majority went with the cheapest option, Vince Coleman, continuing the stars and (relative) scrubs theme that is appearing. 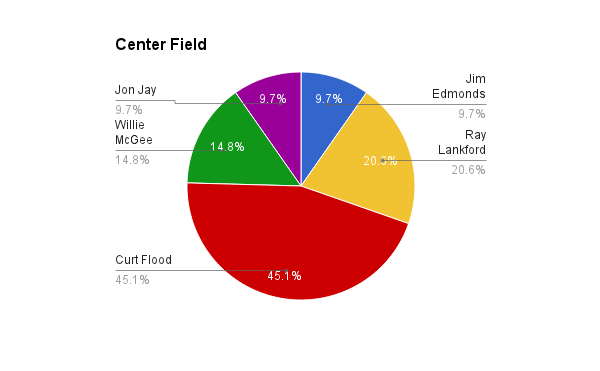 Curt Flood was the most popular choice in center field, but no player was shut out, and the under-appreciated Ray Lankford received considerable support. 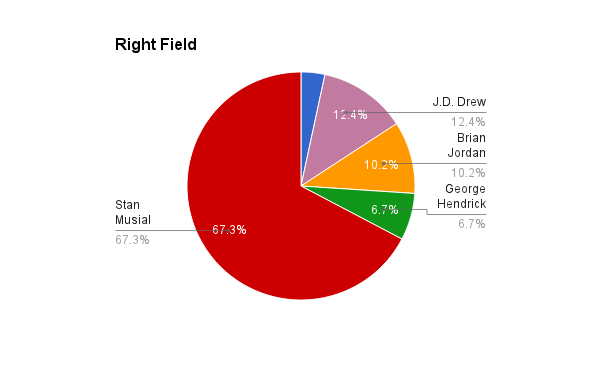 Stan just ran away with this one. Enos Slaughter (in blue) could barely muster a dash of support, and J.D. Drew was the choice over Brian Jordan despite the same price. 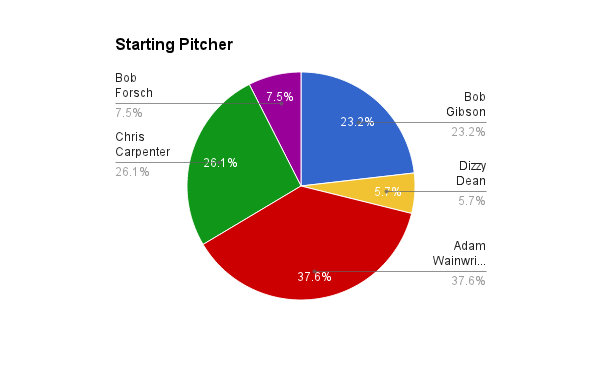 This one was a bit of a surprise to me. I figured Adam Wainwright, Chris Carpenter, and Bob Gibson would all have pretty equivalent support, but Waino emerged as the sound victor.

Going strictly by the most popular choices, we would end up with a lineup with a cost of just $24. Substituting the next most popular pick creates the following lineup:

That is a solid lineup. Not the one I chose, but that exact lineup was chosen by seven users. Thanks again for participating.