The potential for doom was high coming into this game, but Lance Lynn and Matt Adams put in two wonderful performances in Denver, leading the Cardinals to a series-opening win versus the Rockies.

First of all, did you know that Lance Lynn played in the 1999 Little League World Series? 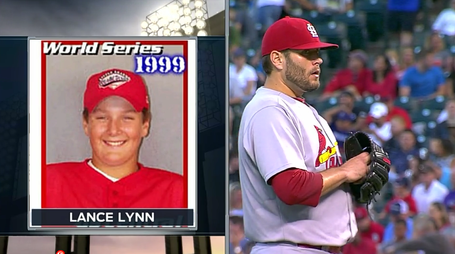 80-grade cheekbones from an early age, it seems.

Lance's line: 8.0 innings, 3 H, 0 R, 0 BB, 7 K.  He threw 108 pitches, 68 of which were for a strike. He was both efficient--he induced eight groundballs and three infield flyballs, for example--and dominating when he needed to be: Lynn got God's own shortstop Troy Tulowitzki striking out with a man on in the first inning, and bested Tulo again on a flyout to Allen Craig with two men on in the sixth. The Rockies did not challenge much beyond that, and no wonder--Lynn was fantastic.

But boo to singles--here's Smash's first home run of the night, off Colorado starter Jhoulys Chacin: 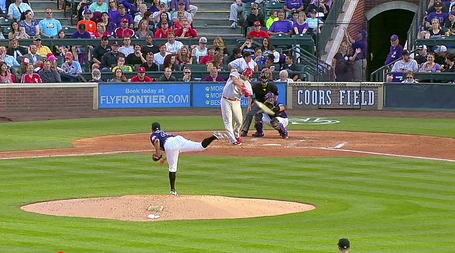 The pitch was up a little and in a little, which is not exactly in Adams's historical wheelhouse, but as he's proving this season perhaps his wheelhouse is bigger than we thought. I looked up Adams's updated wRC+ and ISO after he hit this solo homer, and it turns out that my doing that was premature because more and other excitement was on its way.

Here's his second home run of the night, this time off reliever Franklin Morales, an actual LEFTHANDED pitcher, folks: 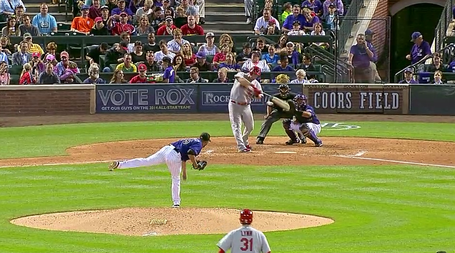 That pitch is definitely up, as you can see, and barely in the zone, as BrooksBaseball tells me. And I repeat that he hit that off a pitcher who used his left arm as the means of delivery, which is notable because before this game started Adams was hitting for a 2 wRC+ against lefties this season (and 38 wRC+ for his career). Big Mayo's ISO is now .203 and his wRC+ is 139, both of which lead the team.

Matt Carpenter, 0-2, 2 BB, 1 HBP, 2 R. Carpenter had a weird night. He led off the game with a four-pitch walk, only to be caught dead-to-rights off the first-base bag by a snap throw from catcher Wilin Rosario, and a lesser man would have accepted the tag and skulked back to the dugout--but listen, Matt Carpenter hasn't accrued positive baserunning value according to Fangraphs by just whistling Dixie, man. Carp slid back to the bag, but all slow-like and bendy, which confused first baseman Justin Morneau, who hesitated like a charmed cobra till it was too late, slapping his glove down on MCarp's hand as it rested triumphant on the bag.

Carpenter's high-level trickery--or was it sorcery? I have reason to believe warlockery might've been involved in tonight's game--extended to his plate appearance in the seventh, which let's not forget was the inning in which Adams would eventually hit his second dinger. In Carp's PA, he just dodged a high-and-inside pitch but reacted so clearly in the manner of someone who has been hit--i.e., he pointed to his forearm--that he convinced even the replay crew in New York that it was a HBP. At first base, Carp did not smile.

Matt Holliday, 2-5, 1 2B, 1 RBI, 1 R. Holliday just missed a homer to right field in the third but received a double in recompense. *CLUTCH ALERT* Mark Ellis (who had reached on a HBP) scored on Matt's double, and that run was technically the game winner. *END CLUTCH ALERT* 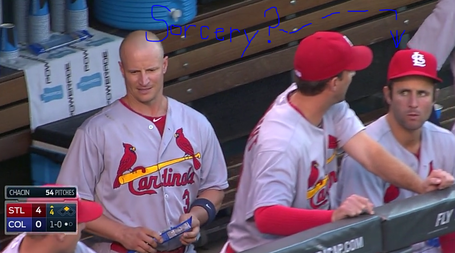