Jhonny Peralta has been exactly what the Cardinals expected. He's been an above-average shortstop and a solid bat, but his power and low average have been a surprise, as has his continued uptick in defense defying typical aging curves.

Jhonny Peralta has many different identities as a major leaguer. Poor defensive shortstop, home run hitter, high-average, low average, average third baseman, good defensive shortstop, PED user, big-money free agent have all been used to accurately describe Jhonny Peralta. Three months into a four-year contract with the Cardinals, he has continued to produce in an unusual fashion befitting his career up to this point. While three months is way too early to judge a four-year contract, even one front-loaded like Peralta's, he looks to be one of the better free agents signings of the offseason.

In nearly 1500 games and 6,000 plate appearances, Jhonny Peralta's career line sits at .266/.329/.425 for a wOBA of .330 and wRC+ of 102. His offensive numbers so far this season do not perfectly line up, but he has hit .236/ .311/.425 for a wOBA of .325 and wRC+ of 107. While his average on base percentage are low and his slugging is in line with career averages his wRC+, which is weighted to league average, is higher than his career averages as offensive numbers overall have declined considerably since he began his career as a 21-year old rookie with Cleveland in 2003.

Coming into the season, his ZiPS projected line was .267/.320/.412 for a wOBA of .317. Despite the lower average, his power surge has taken his rest of the season projections to .258/.315/.415 for a wOBA of .323. Jhonny Peralta's hatred of first base has kept his numbers up despite a weak batting average. His current .236 batting average would be the worst of his career in a full season, and his BABIP of .260 would also be a career low. It is reasonable to expect that Peralta's average to come up some while his power declines. Peralta's ISO (SLG-BA) currently sits at .189 which would be second only to his .197 back in 2008. Only ten hitters this season have a batting average below .250 with an ISO above Peralta.

The list is mostly all or nothing first base and designated hitter types who make little to no contributions on the field. George Springer struggled initially, but was given continued plate appearances and has since flourished for the Astros (hint, hint). Only the very surprising Brian Dozier and Ian Desmond fit with Peralta as players at difficult defensive positions. Peralta is getting it done at the plate and will likely continue to do so for the rest of the season. The list above dovetails neatly into the other unusual aspect of Peralta's career, his defense.

Jhonny Peralta's career UZR/150 as a shortstop sits at 0.5, almost perfectly average. Since UZR started in 2002, seventeen shortstops have amassed more than 8,000 innings at shortstop. Among those, Peralta is right in the middle at ninth. The same holds true for his Defensive Runs Saved (DRS), which sits at three runs below average after over 10,000 innings at shortstop (10th among the same group). Judging solely by career stats, it would be easy to say Peralta is an average defensive shortstop and leave it at that. Looking closely at the numbers shows Peralta started as a very bad shortstop and is currently one of the better defensive shortstops in the game, going completely against defensive aging curves.

Defensive metrics can have significant year-to-year variation so it is best to look at three year averages. Taking the individual season numbers from Fangraphs, here are the three year averages for Peralta for UZR/150 and DRS beginning with 2005-2007, when he first played shortstop full-time. (I combined and weighted 2009-2010 into one season as he played mostly third base). 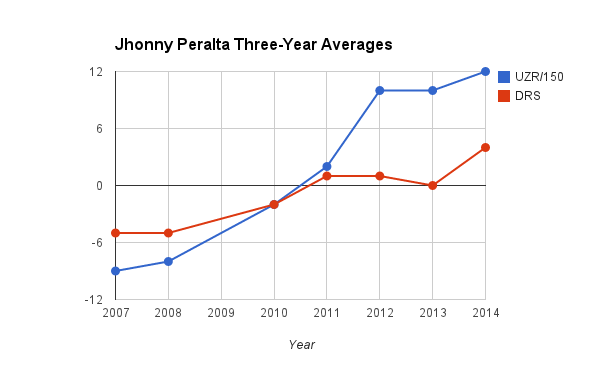 The DRS numbers are heavily weighted this season as he is currently 13 runs above average. Since he moved from the Indians to the Tigers, it would be unfair to characterize Peralta as a below-average shortstop. There are differing theories as to how he could have improved, like better coaching, defensive positioning and better conditioning. He has never passed the eye-test, but for many years Derek Jeter passed it when advanced statistics said otherwise. Peralta may be getting credit for positioning he is not entirely responsible for, but because he has always been sure-handed on the plays he gets to, good positioning maximizes his skill-set. According to the Inside Edge data available at Fangraphs, Peralta is above average compared to shortstops when it comes to making likely and routine (60% and above) plays. On likely plays (60-90%), shortstops on average make around 79% of the plays, while Peralta is at 84%. On the routine plays, the average shortstop makes the play around 97% of the time, while Peralta is over 98%.

Jhonny Peralta is an unusual player, rarely fitting into expectations, but he has continued to produce for the Cardinals at near his solid career norms offensively while continuing to make more plays on the defensive end. Peralta's four-year contract raised question marks for its length and average annual value. Peralta has lived up to his end so far without putting up numbers differing too far from expectations. While the overall lineup for the Cardinals has yet to completely click, Peralta moving to shortstop has deepened the Cardinals lineup and should pay dividends moving forward.