Player profile and interview with Sasha Kuebel, the 38th round pick of the St. Louis Cardinals

Sasha Kuebel, out of St. Louis, looks to make a name for himself in a pitching-rich organization like the Cardinals.

Share All sharing options for: Player profile and interview with Sasha Kuebel, the 38th round pick of the St. Louis Cardinals

With the 946th pick (31st round) of the 2011 MLB Draft, the Oakland Athletics selected left-handed pitcher Sasha Kuebel out of St. Louis University High School. Instead of signing with the A's, Kuebel honored his commitment to pitch at the University of Iowa. While in Iowa City, Kuebel had an up-and-down career with the Hawkeyes, and despite having one year of NCAA eligibility left, he has decided to sign with the hometown St. Louis Cardinals after being selected in the 38th round of this year's draft.

Viva El Birdos: Playing your high school ball in the St. Louis area (at SLUH), being drafted by and ultimately signing with the Cardinals is likely a dream come true. Can you expand on this for us?

Sasha Kuebel: There are really no words to describe the feeling. More than anything, I feel blessed to have this opportunity with such a history-enriched, amazing organization. The hometown support has been a huge motivator to work harder than ever before.

VEB: What is your honest opinion on high socks?

SK: They are absolutely amazing, and of course, I will be wearing them in games.

VEB: Mark Buehrle, a left-handed pitcher out of the St. Louis area like yourself, was also drafted in the 38th round. What are your thoughts on this situation?

SK: Wow! It just goes to show that with an intention and mindset to be the best, it can happen no matter where you are selected. All you need is the opportunity, and fortunately, that has been given to me [by the Cardinals].

VEB: Having one year of eligibility left at Iowa, how did being drafted by a pitching-rich organization like the Cardinals impact your final decision?

SK: It is one of the biggest factors that played into the decision. With a developmental system like the Cardinals, especially in regard to pitching, the decision became very clear for me.

VEB: Growing up, which player did you look up to most in the big leagues?

SK: I never looked at the big-name, top-dollar players growing up. One that stuck out to me was David Eckstein, who did everything in his power to overcome the doubts that surrounded him as a player. He encompassed the very definition of what determination and hard work is, and that is something I look forward to doing as a Cardinal.

VEB: What is one thing you learned in high school (at SLUH) or college (at Iowa) that has had the most significant impact on your development as a player?

SK: Growing up as a pitcher—one of the most significant lessons learned is the necessity to keep the ball down in the zone. Movement and location have just as much ability to miss barrels as velocity. And most of all, you have to relax. Personally, I perform my best when I’m relaxed and have a plan.

VEB: Since being drafted, which player(s) currently in the organization have reached out to you, and what did they have to say?

SK: Tyrell Jenkins was the first player to reach out to me. Realizing I was about to enter a completely new world and lifestyle, Tyrell made the transition much easier and I am appreciative of his welcoming efforts.

VEB: Being drafted near the end of the draft, some people may forget about you when looking at this year’s draft class, what are one or two things you would like to say to those people?

SK: I have always been a firm believer that people make their own destiny. That is what I plan on doing.

VEB: In terms of repertoire, please give us a brief description (velocity, movement type) of the pitches you throw.

SK: My pitches include a two-seam fastball that ranges from 87-90 MPH, a cutter, a slip pitch (compliments of St. Louis’ own Scott Terry), and a changeup.

Editor's Post-Interview Addition: According to Sasha, a "slip pitch" is a 12/6 curveball achieved without snapping your wrist, and he utilizes it most in 0-0, 0-1 counts.

VEB: A follow-up question about your repertoire: Which pitch are you most comfortable with at this point? Least comfortable?

SK: I am comfortable with all of my pitches, and I cannot wait to develop them even further as a Cardinal!

VEB: At the end of the 2014 GCL season, what would you have liked to have accomplished, personally?

SK: That is a difficult question to answer! My current goals are to take each day as its own challenge to get better at what I do and becoming more and more a part of "the Cardinal Way." There really isn’t much like it. Staying in the present moment and allowing the rest to take care of itself is the name of the game at this point. 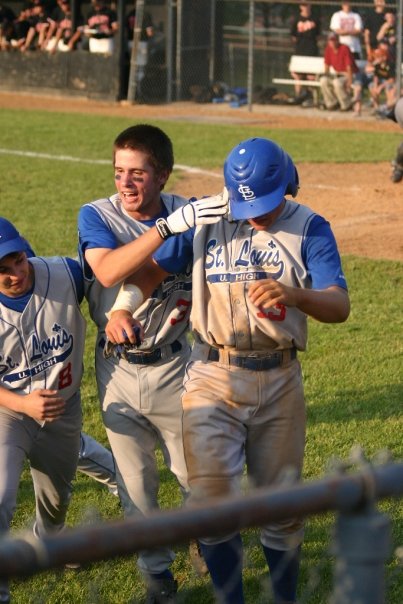 Like most professional ball players, Sasha was quite the hitter back in high school as well. This picture is from the 2008 State Quarterfinal game against Parkway Central (the home of Max Scherzer). The game was tied 4-4, but Sasha put us ahead with an opposite field, two-RBI double that ended up being the game-winner (Final Score: 9-4). In the scene depicted above, I am the one with the annoying eye black celebrating by smacking Sasha's helmet on his way back to the dugout. This win resulted in SLUH's first State Final Four appearance since 1997, and it is a day I will remember for a long time.

What do I remember most about my time playing with him, you ask? Well, Sasha was one of the best players I played with in my relatively short-lived career. I played on some pretty good teams in my time at SLUH and despite Sasha being one of the youngest players at the time, he was still easily one of our top players and an obvious team leader. Now, he wasn't really the "rah-rah" leader type. Instead, he was one of those players who led by example and let his on-field play do the talking.

Sasha is extremely coachable, and I can assure he will be act like a sponge now that he is in an organization like the Cardinals. One more personal memory: I never made solid contact off his twoseam fastball. Our coach set up some mini intersquad games to break the monotony of practice, and I always dreaded facing Kuebel (side note: I wasn't a very good hitter). Sasha is a really good kid, teammate, learner, and leader. I truly believe he, as one of only three left-handed pitchers selected by the Cardinals in this year's draft, will be one to keep an eye on going forward.

Congratulations, Sasha. Now, get to work!