The Cardinals broke out with thirteen hits and seven runs, and one of them was on a Peter Bourjos home run. Here we go.

Share All sharing options for: Cardinals at Braves Recap 5/7: Waino, Bourjos lead Cards to 7-1 win over team without Waino, Bourjos

This game was a delight.

Adam Wainwright pitched up to his usual standards, throwing eight strong innings and allowing just one run, and the Cardinals broke out for 13 hits in a collective yawp of offensive production--but forget all that, because this night was about Peter Bourjos.

Finally given a chance by Mike Matheny to start a game two days ago, Bourjos proved that not only is he an elite centerfielder and a terrific baserunner; he also got two hits, and no matter how weakly those balls were struck, they will forever go down as major-league singles. His performance (and let's face it, really just the hits) were convincing enough that Matheny deigned to give Bourjos the start against Braves lefthander Mike Minor tonight.

What he did do was go 3-4 with a single, a double, and a home run. So what we have here now is a centerfielder with elite skills, incredible speed, sufficient hitting ability, and surprising power. John Mozeliak says, caustically: "Yeah. I know." 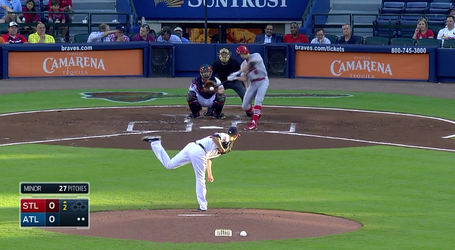 As exciting as Bourjos's hits were, the most thrilling thing for me was seeing him run from first to third on Wainwright's single in the fourth. Watching Peter Bourjos run at full speed and trying to describe it in words is really a wonderful opportunity to realize your limitations as a writer. It's just--he's incredibly fast and equally elegant, and I keep thinking of the phrase "greased lightning," or of this one line from Gerard Manley Hopkins:

It will flame out, like shining from shook foil

Something like that. Mainly I'm happy that Bourjos's great offensive performance tonight should ensure that we get to watch him play more in the near future.

The Wagonmaker won his NL-leading sixth game tonight. He wasn't transcendentally great like he was against the Mets earlier this season, but he was very good. Here is his line: 8.0 IP, 6 H, 1 ER, 1 BB, 6 K. Five of the six hits he gave up were doubles, so he did allow some hard contact.

But he also provided some hard contact, as Waino went 2-4 with a double of his own, scoring twice. Maybe his desire to win the Silver Slugger isn't crazy--after tonight's game he's hitting for a 165 wRC+ in 24 PAs, which leads all pitchers in all of baseball. The Cardinals pitchers, in fact, lead the National League with their 45 wRC+, good for 0.4 WAR!

Here's a quick (and reductive, of course) illustration of Wainwright's success this year versus Shelby Miller's lack of same.

First, here are the locations of every pitch Shelby has thrown this year, with blue meaning least frequent and red most: 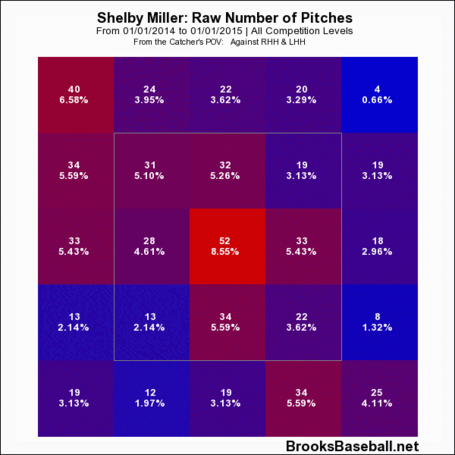 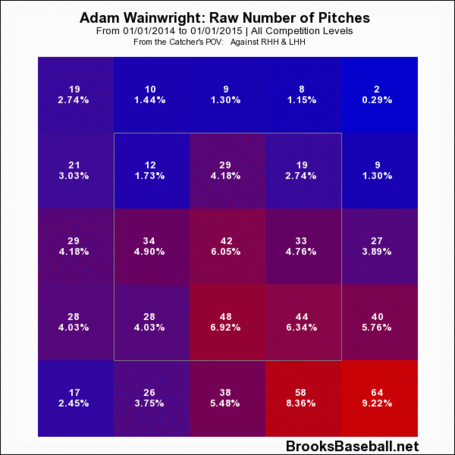 Down and away to righthanded batters, down and in to lefties. Well done, Wagonmaker.

The Cardinals have the day off tomorrow but begin a three-game set at Pittsburgh on Friday at 6:05 central, Michael Wacha facing Francisco Liriano.