This post will be much different than my usual posts, and after last night's game, I think it will actually be a breath of fresh air.

Last night, I had the privilege of experiencing my very first Cardinals game on the big screen at Ballpark Village. Considering I am in Indianapolis for much of the year with school, I had been longing from afar at all the pictures, tweets, and texts I had seen since the grand opening of BPV. Well, this finally changed last night, and despite a pretty terrible game, I thoroughly enjoyed my first experience, and I cannot wait for my next one. 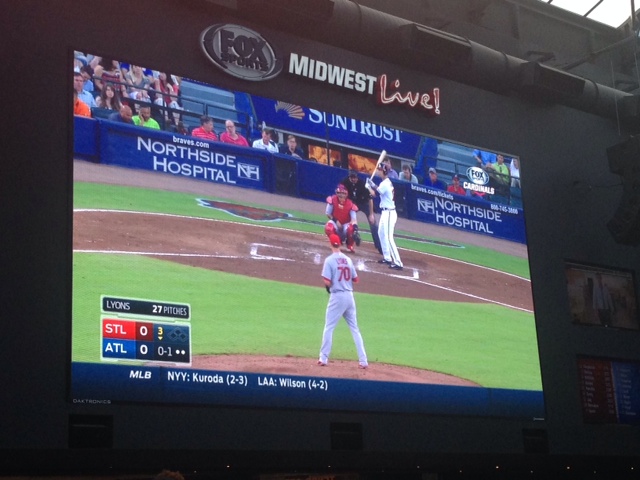 This is where I enjoyed much of the (lifeless) game. I had never watched a baseball game on a forty foot LED TV before, but damn, it was amazing. At home, I had been pretty impressed with my fifty inch plasma, but there really is no comparison now. When I go back to school this week, watching games on my 13-inch computer screen will be pretty depressing. Okay, so the TV is pretty cool, but what else? The overall atmosphere was awesome. Nearly all of Ballpark Village's tenants (i.e. Howl at the Moon, PBR, the Brewhouse, etc.) open up into this concourse that is capped by an all-glass, retractable roof. The roof was closed for the entirety of my visit, but I can only imagine how much more awesome the experience is with it being open.

What about the Fox Sports Midwest Live! food? I was there with my sister and between the two of us, we had a burger, chicken strips, and fries. I wasn't expecting much since we weren't in one of the true BPV restaurants, but the food was great, especially the seasoned fries that came with our meals. We had been told great things about their pizza, and after seeing a few ordered at the table next to us, that will likely be my choice next time.

The rooftop of the Budweiser Brewhouse: 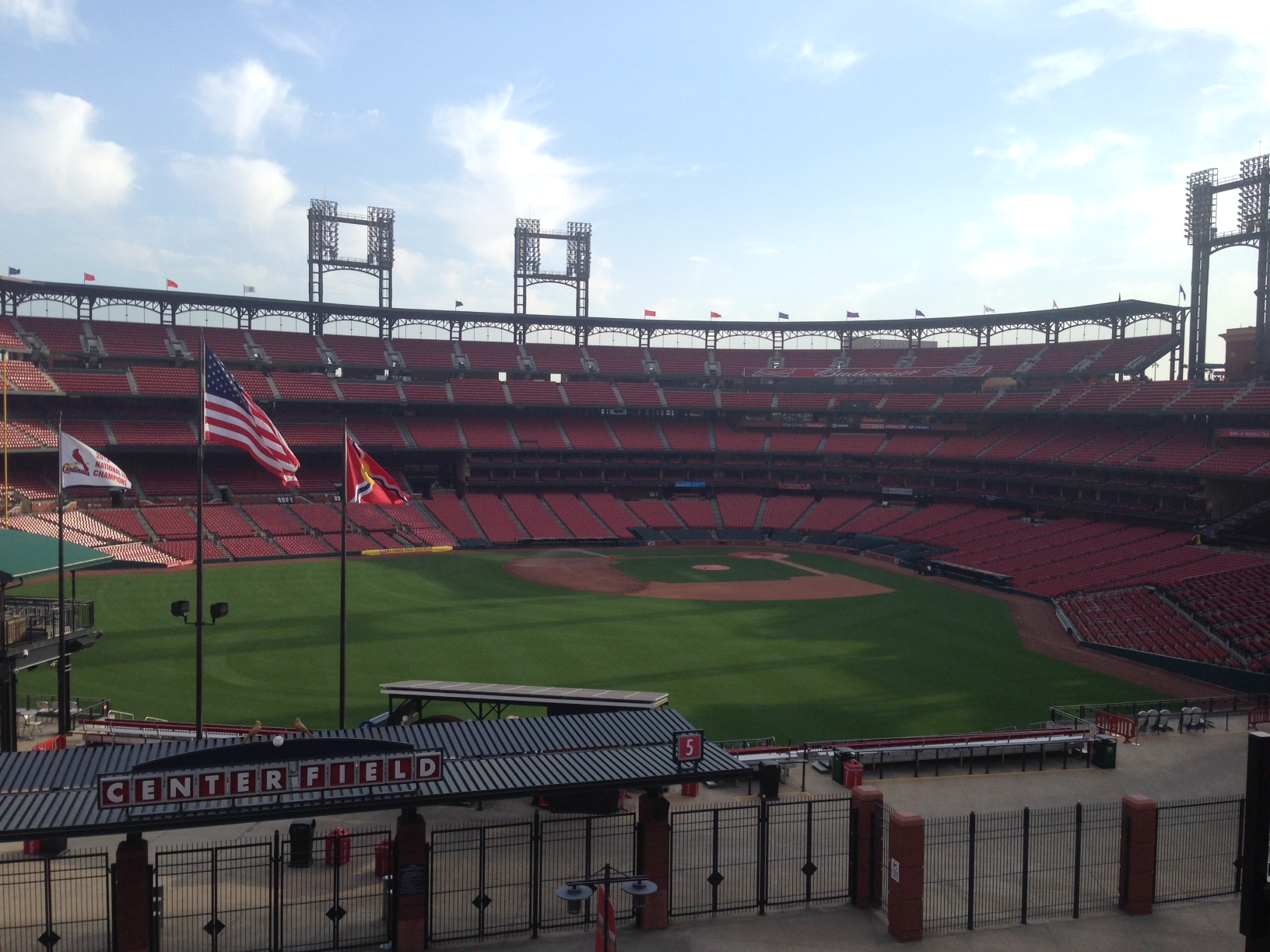 This view doesn't need words, and to be honest, this was my favorite part of the visit (especially since I didn't have time to check out the Hall of Fame museum). I had been pretty talkative with my sister because I hadn't seen her for months due to school, but once we got here, our conversation went silent. The view was breathtaking. Sure, I love baseball, but even people who don't like baseball would have a tough time not appreciating it. Plus, in terms of seating for an actual game, you really do feel like you are part of the stadium, so I may have to take in a game from there at some point.

The first floor of the Budweiser Brewhouse: 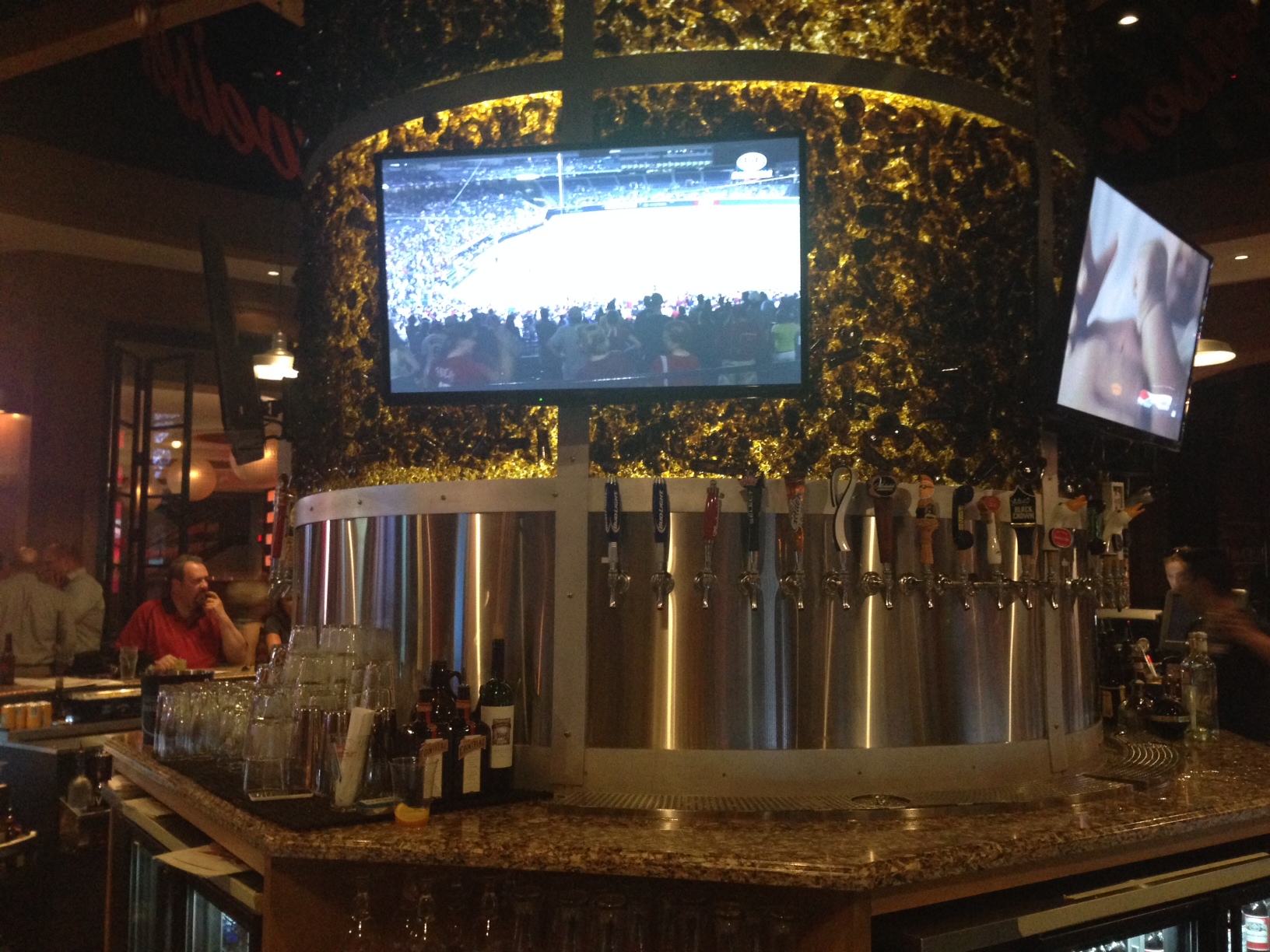 If you like beer, the bar atmosphere, sports, big screens, and even beer art, then this is your go-to place in Ballpark Village. I like all of the above, so I was mesmerized the entire time I was at the bar, even more so than Allen Craig was while facing Craig Kimbrel in the ninth. What's going on with that back splash behind the TVs? That's hundreds of crushed/broken Budweiser beer bottles placed on a transparent sheet while being illuminated from behind. Trust me, the picture doesn't do this justice. It is something you need to see firsthand. What about the prices? The draft beer I consumed ranged from $5-6 per glass, which isn't necessarily cheap, but it's a lot better than the in-stadium prices.

I thoroughly enjoyed my experience. It really is hard for me to put into words. The atmosphere was awesome, the workers were friendly and seemingly ever-present, and the product was everything I could have asked for, even if it took a few more years to be completed than promised. If you live in the St. Louis area and you haven't made a trip to BPV just yet, you owe to yourself to go at least once. If you are a Cardinals fan from afar, who comes in town for one or two games per season, you better add at least one day to your trip. Ballpark Village has too much to enjoy in one day/night. I look forward to going again soon.

What are your thoughts on Ballpark Village so far?